Numerous studies have taught us that poor diets and sedentary lifestyles are spurring an obesity epidemic in the western world.

Now new BYU biological research is showing for the first time how high-fat, high-sugar food causes our bodies to gain weight and develop diseases – at the cellular level.

BYU biologist Benjamin Bikman says a tiny lipid called ceramide is at the root of this pathway that disrupts our metabolism and leads to obesity.

“Ceramide forces the mitochondria in our cells to pull apart in distinct blobs as it accumulates,” Bikman said. “In so doing, the cell doesn’t operate as it is supposed to.”

Specifically, as ceramide alters the physical form of the mitochondria with muscle cells, it not only reduces the ability of the cells to respond to insulin and take up sugar from the blood, but it also alters how the cells can use both sugars and fats for fuel.  Ultimately, this disruption leads to high insulin in our blood, which drives fat mass development and slows down metabolism.

Once Bikman and his students saw how ceramide was affecting cells, they decided to see what would happen if they tried to slow it down in lab experiments.

The team fed two sets of test animals a high-fat, high-sugar diet, but reduced the ceramide production in the second group by supplementing them with myriocin, a known ceramide inhibitor. At the end of the 12-week test period, the first group of animals predictably gained weight and became diabetic while the second group did not, despite consuming the same high-fat, high-sugar diet.

“If we can prevent this shape-changing effect from happening in the cells by stifling the ceramide, we can prevent insulin resistance,” said Melissa Smith, a PhD student in Bikman’s lab. 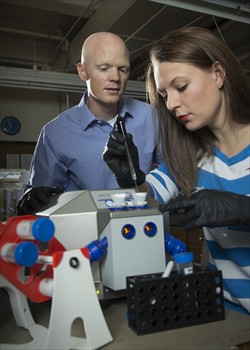 In the meantime, the team will continue to study the effects of ceramide blocking with several additional studies already in the works.

“From a cellular perspective, ceramide may be both cause and consequence of obesity, ” Bikman said.  “Ceramide accumulates in the muscles with unhealthy living, not only linking lifestyle to weight gain, but also connecting weight gain to disease. But we’ve still got more questions that remain unanswered.”

Added Smith: “Though potential therapy resulting from this research is still distant, every little piece we can add to the puzzle helps.”