Trick or Treat: Time to Read

Halloween brings fun and enjoyable picture books that kids will love to read – or have read to them. Here are some of the best and newest books to celebrate a holiday that is tailored for youngsters. With the exception of the first book, which is good for all ages, the rest are good for ages three to eight. 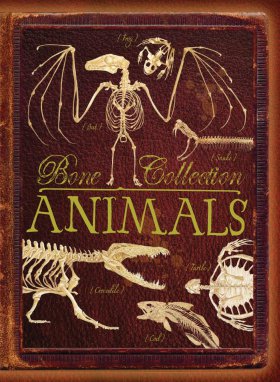 Bone Collection: Animals, by Rob Colson, and masterly illustrated by Sandra Doyle, Elizabeth Gray and Steve Kirk, is a brilliant non-fiction book that’s packed with the skeletons of many different types of animals. The layout of this exquisitely pictured book is kid-friendly with many amazing pictures on every page and information well placed and limited helping draw the young reader in. There are also full-color photos as well as a variety of large and small illustrations on every page (some take up the open-page spread). This book is packed with animals from bats to gorillas and includes their behavior and habitats making it just creepy enough to invite kids to open the book, but not scary.

Click, Clack, Boo: A Tricky Treat, by Doreen Cronin, and painted with watercolor by Betsy Lewin, is another fun and humorous edition of these funny barnyard animals. Farmer Brown doesn’t like Halloween and all of the spooky sights and sounds it brings. He leaves a bowl of candy at his front door and locks up for the night. But then he hears those “creaking”, “crunching” sounds outside. He opens his door and sees a newly hung sign saying “Halloween Party at the Barn”. What he sees happening in his barn will bring smiles all around, especially Farmer Brown’s expression on the last page. This is a delightful book and onomatopoeia’s abound aplenty! 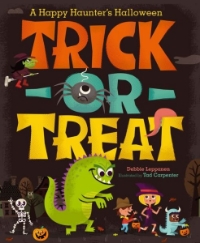 Trick-Or-Treat: A Happy Haunter’s Halloween, by Debbie Leppanen, and brightly illustrated by Tad Carpenter, has fifteen clever poems on varied subjects that include witches, ghosts and mummies. The poems are short, but packed with a punch, which will delight even the most timid new reader. Each brief poem features a full spread picture such as “Slick Ride” – “Witches on broomsticks / fly over treetops. / except when it rains, / then they use mops!”

Romping Monsters, Stomping Monsters, by Jane Yolen, and vibrantly painted with oil and acrylic by Kelly Murphy, displays the most unusual monsters ever created! The simple rhyming text helps move these monsters to “hopscotch”, “slide”, “swing” and “piggy-back ride”. Some have three eyes, some have one. Some have four arms and some have more. Youngsters will beg to have this reread over and over!

Splat the Cat: What was That?, by Rob Scotton, is such a fun small lift-the-flap book! Splat should be happy it’s Halloween, after all, he’s a black cat. But as he goes through a haunted house, you get to lift the flaps to see what’s behind each part of the house. Little ones will enjoy this book as they seek to see what’s hiding. 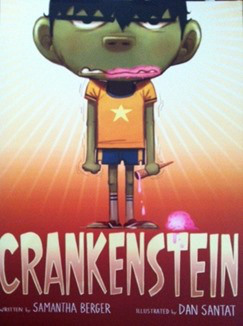 Crankenstein, by Samantha Berger, and illustrated with color completely covering all the pages by Dan Santat, is an over-sized book with plenty of attitude. A question is posed on the first page: “Have you seen Crankenstein?” He is covered in blankets in his bed asleep and he is suddenly woken up with a loud “Good Morning!! How are you?” Thus begins his angry attitude. As he goes through his day and life you see him not dealing well with situations such as having to get all bundled up when it’s too cold on Halloween or having to take “gross cough syrup” which he doesn’t like at all. However, friendship can change his whole outlook and this makes Crankenstein not so cranky.

The Skeleton Pirate, by David Lucas, is one of those books that has such a great story that it begs to be read aloud. In fact, be prepared for this book to be requested to be read to your children nightly.  This Skeleton Pirate claims he’s the “Terror of the Seas” and that he’ll “never be beaten“. Unfortunately, he’s captured and thrown overboard and sinks to the bottom of the sea. But a nice mermaid saves him but not before both are swallowed by a very large whale. What they find inside this mammoth fish and how they end up will have you saying “shiver me timbers”. The brilliant watercolor fills the double-page pictures.

Monsters Loose! (A Seek and Solve Mystery!), by Bruce Hale, and completely covered in an array of fantastic monsters and their dwellings by Dave Garbot, has an appearance to the “Where’s Waldo” books. The first two pages present the suspects to help you search and locate throughout the rest of the book. There are additional questions to look for specific items as you pour over each entertaining page! This would be a perfect book in the car while waiting or driving long distances. 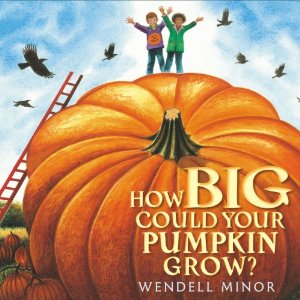 How Big Could Your Pumpkin Grow?, by Wendell Minor, is actually a book to learn about great American landmarks. It begins with pumpkins growing in a pumpkin patch and goes on to show pumpkins being used as boats and asks the question “What do you do with an enormous pumpkin? Carve it into a…boat!” Another double-page spread shows Mount Rushmore except that between Roosevelt and Lincoln is a giant pumpkin. Another double-page spread depicts the Grand Canyon as well as a giant pumpkin at the end of the Colorado River and asks: “Could the most colossal pumpkin fill the Grand Canyon?” There are some terrific synonyms describing the “huge” pumpkins on each page. And, you can find more information about each of these national sites at the back of the book. The vivid color portrayed is beautifully rendered in gouache and watercolor.