Learning To Read Has Never Been So Fun! | Meridian Magazine

Learning To Read Has Never Been So Fun!

Authors and illustrators of emergent and early chapter books are keyed into helping youngsters enjoy reading. The subjects and pictures of these newly published books seem to draw the young reader in and keep them reading. Many of these books include humor, sensitivity and non-fiction subject matter and many are part of new series. The books featured here begin with beginning readers and progress to more difficult books, which ends with early chapter books. A few helpful factors when looking for books for your new reader are: repetition and limited text with larger font and pictures, which help give children clues to the story. As readers become more confident in their reading, the text becomes longer and smaller, while fewer pictures are found throughout the book. 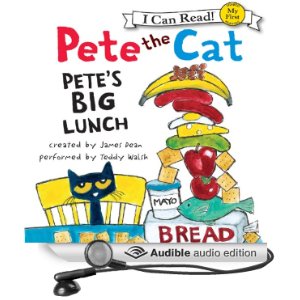 Pete the Cat: Pete’s Big Lunch, by James Dean, is a hilarious story for the new reader. Pete has decided to make a sandwich for lunch. But he gets an idea to keep adding items to his sandwich and before he knows it, the sandwich is enormous. This is part of a great series with a cat who is so cool in the bright illustrations and is great fun to read.

Fly Guy and the Frankenfly, by Ted Arnold, is the latest story in this delightful and popular series. When Buzz and his small pet fly, Fly Guy, complete their monster puzzles and masks, Buzz has a nightmare about a huge Frankenfly on the loose. What Buzz discovers is the actual creation Fly Guy made which will reassure youngsters about bad dreams. This book will “fly” off the shelves. 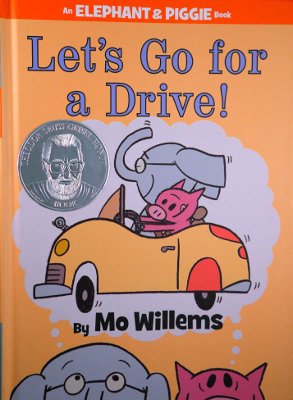 Let’s Go For a Drive, by Mo Willems, is a book from another collection by an author/illustrator who won the Caldecott a few years back. This particular series features Gerald, a large gray elephant, and Piggie, a very pink pig. The format of this easy reader is repetition. Gerald comes up with the idea to go for a drive and tells Piggie what is needed after which he tells the reader why his idea is a good one.

Why Do Zebras Have Stripes?, by Gilda and Melvin Berger, is an excellent non-fiction book to teach and excite children about facts. This is actually the second book for the Berger’s. I reviewed their first book, “Why Do Feet Smell?”, and this book is just as good, is easy to read and as interesting as their first book. The question posed for the title is just one of 20 questions about different animals that kids may be quite curious about. 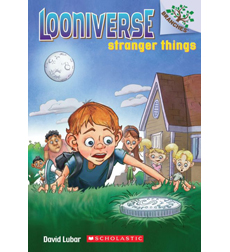 Looniverse: Stranger Things, by David Lubar, and brightly illustrated by David Loveridge, is an easy chapter book and the first in a series labeled “Looniverse”. Ed observes his whole world taking a strange turn when he finds a coin labeled “strange, stranger”. Now, goofy strange things begin occurring such as his sister’s food train suddenly turning into a real train. There are now three books published with a fourth planned in January.

Missy’s Super Duper Royal Deluxe, by Susan Nees, is another new series featuring a very frilly kind of girl. Missy forms a new club with her friends where they create crafts, bake and have fun sleepovers. But problems ensue when her mom doesn’t want her to wear the ruffles and bling on picture day. There’s a surprise waiting when you see how Missy deals with this request. There are plenty of pictures and captions to move this easy chapter book along.

The Notebook of Doom: Rise of the Balloon Goons, by Troy Cummings, is the first in this new series: “The Notebook of Doom”. Alexander has recently moved to a new town and he soon realizes that the balloon goons you see at car dealerships are everywhere. When he finds The Notebook of Doom, he now has top secret information that is all about these monsters. This series is developed evenly, with mounting expectations, excitement and mystery. The characters are also well developed and intriguing! The black-and-white illustrations add perfectly to the storyline.

Galaxy Zack: Hello, Nebulon, by Ray O’Ryan, showcases how youngsters can adjust and make new friends, even on another planet. This first book in the series is entertaining and features Zack who moves to Nebulon where he doesn’t know the language and everything is very different including the land, sky and even the water which are different colors than on earth. Nebulon is very inventive where Zack learns that small boxes turn into cars, elevators move in every direction and even beds come down from ceilings. This book could motivate boys and girls to come up with their own new innovative stories. 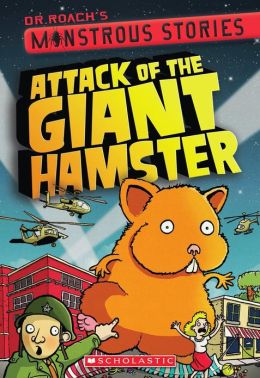 Monstrous Stories: Attack of the Giant Hamster, by Dr. Roach, is book number two in this series and is a fun and funny story involving Billy’s new pet hamster, Hercules. It seems that this hamster is extremely lazy and seems to only want to sleep. So Billy comes up with an ingenious idea and feeds him some power snacks. Now Billy has a huge problem on his hands as Hercules isn’t sleeping anymore!