The Textual Development of D&C 130:22 and the Embodiment of the Holy Ghost | Meridian Magazine

The Textual Development of D&C 130:22 and the Embodiment of the Holy Ghost

This article was written by Ronald E. Bartholomew. 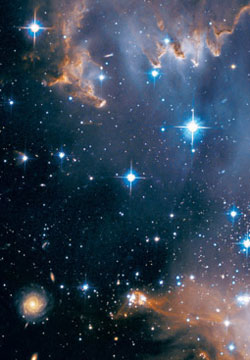 This notion of the embodiment of the Holy Ghost is further complicated when we consider Joseph’s later teachings that “there is no such thing as immaterial matter. All spirit is matter, but it is more fine or pure, and can only be discerned by purer eyes” (D&C 131:7), suggesting that while the Holy Ghost’s body is not comprised of flesh and bones, it is still composed of tangible matter. Therefore, it is not surprising that since the 1850s, this enigmatic phraseology has led to general disagreement among LDS Church leaders and scholars regarding the exact meaning of the final sentence of D&C 130:22, “Were it not so, the Holy Ghost could not dwell in us.”

What makes this even more interesting is the fact that the portion of the canonized text in D&C 130:22 describing the embodiment of the Holy Ghost has undergone multiple revisions from its inception.

To a person who has been baptized in fire and baptized in the personage of the Holy Ghost (baptize means to immerse completely), Joseph Smith's statement that the Holy Ghost dwells "in us" is perfectly understandable. When one actually experiences the immersion in the person of the Holy Ghost, and feels his spirit body inside one's physical body, healing and cleansing every atom, one KNOWS beyond a shadow of a doubt that the Holy Ghost is a real personage of spirit and that he has a tangible body made of spirit matter. I guess the confusion comes from people who have never had this heavenly experience. To feel the Holy Ghost lift you up and cradle you in his arms, and perform healings internally in your body, and to have him be your personal Comforter and guide, is to know that he can actually dwell in you.

Why get so hung up on this? Is modern physics the final word? After all, modern physics proved the world was flat. Any man of science knew that. Its interesting to note that alternative physic theories can elegantly explain discrepancies the author professes. Tangible matter is an observation on our part. In reality, tangible matter is in a state of constant flux. To greatly oversimplify it, matter fluxuates between a state of matter as we know it and "anti-matter." We can only observe the tangible matter side of the equation. To me there is no discrepancy.