Happiness in the pages of a book can be found beginning when a child is very young. Here are some excellent picture books to keep youngsters, ages three to six, actively engaged in learning. 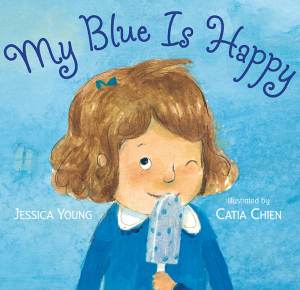 My Blue is Happy, by Jessica Young, and illustrated with full page vibrant acrylic by Catia Chein, explores feelings through colors. However, the colors expressed aren’t typical of how many perceive the use of these colors. For instance, the girl highlighted throughout the book sees brown, unlike her father, in a special way. “Dad says brown is ordinary / Like a plain paper bag. / But my brown is special / Like chocolate syrup…/ And a piece of earth / that’s just for me“. The poetic text magnifies the colors to create a linguistic attitude of visual distinction that celebrates all that surrounds us.

Oliver and His Gator, by Paul Schmid, creates a wonderful soothing feeling from anxiety about school and easing into the structure of the day. Oliver wakes up clutching a stuffed alligator. As he walks to school, he meets an alligator in a lake and takes him along with him. His nervousness about school is conveyed through the alligator. When the teacher asks his name, he anxiously responds with “Munch, munch!” The alligator seems to swallow Oliver’s feelings as you see the reptile getting larger and larger. The simplicity of the drawings, by using pastel pencil and soft lines, creates a subtlety of feelings expressed. One must conquer their fears before learning can be achieved. 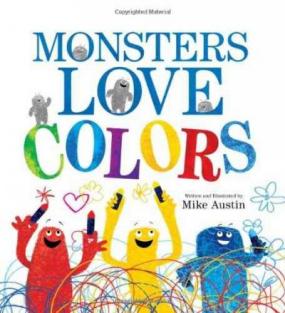 Monsters Love Colors, by Mike Austin, showcases furry and shapeless monsters with happy faces as they go about mixing and creating colors all across the pages. The rhyming nature of the text streamlines the excitement of these creatures as they combine primary colors together to make secondary colors. The font even changes colors and size as the mixing progresses. The pencils, crayons and ink used throughout will definitely encourage youngsters to create their own colorful monsters! 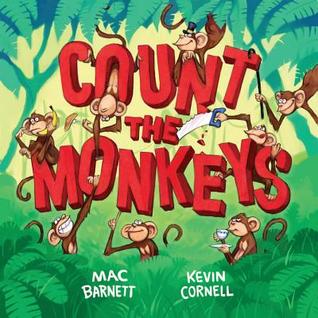 Count the Monkeys, by Mac Barnett, and vibrantly illustrated by Kevin Cornell, is the perfect read-aloud as the text is fun and funny as it leads you from page to page with a dialogue directed to you, the reader. Upon opening the book, you read “All you have to do is turn the page…and Count the Monkeys.” However, on the next page is one large king cobra who seems to have scared the monkeys off. But you’re invited to turn the page “very slowly, very carefully so he doesn’t notice us.” Now you discover two mongooses who have chased the cobra away and so on. When you finally get to the last hilarious page, you never did find those monkeys to count (or did you?)

The Deep, Deep Puddle, by Mary Jessie Parker, and brightly painted by Deborah Zemke, is an inventive counting book that incorporates a story that begins with a rainfall and a dog. After a large puddle is formed resulting from the rain, one dog sniffs it and “sinks out of sight”. From there two cats, three squirrels and eventually tourists and even robbers end up in this deep puddle. Only after twelve workers in their eleven tanker trucks hose away the water, are all uncovered and free to go on with life (except for the robbers who are whisked away to jail). This counting book teaches reading the words of numbers rather than just having the number itself represented.

The Chicken Problem, by Jennifer Oxley, and cleverly drawn in a cartoon-style by Billy Arnonson, is a story that calculates math problems as the story progresses. Peg and Cat are visiting their pig friend and are about to eat the pie they brought with them. However, there are four pieces of pie and only three of them. Cat decides to invite a chicken to join them and solve the problem. But now the problem has grown as Cat has left the chicken coop open and now there are 99 chickens loose. Each page has a simple math problem instead of the page number and as you see chickens everywhere, you’ll begin counting and solving their problems right along with them. 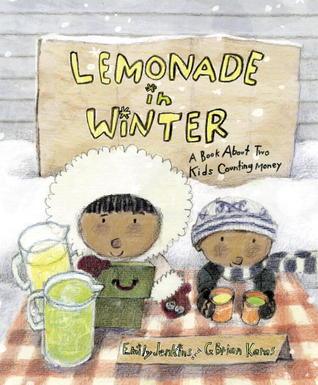 Lemonade in Winter: A Book About Two Kids Counting Money, by Emily Jenkins, and painted with ink and pencil by G. Brian Karas, is an excellent book full of important concepts to learn. Young Pauline and her little brother, John-John, are on a quest to sell cold lemonade, limeade and lemon-limeade in the dead of winter even at the behest of their parents. These young entrepreneurs teach the rest of us about marketing, goal-setting and money. When they see they aren’t getting sales, they resort to other ways of getting attention such as singing, cart wheeling and then ultimately marking down their prices. The last page breaks down each sale. There’s also a catchy way Pauline teaches us to remember each coin.