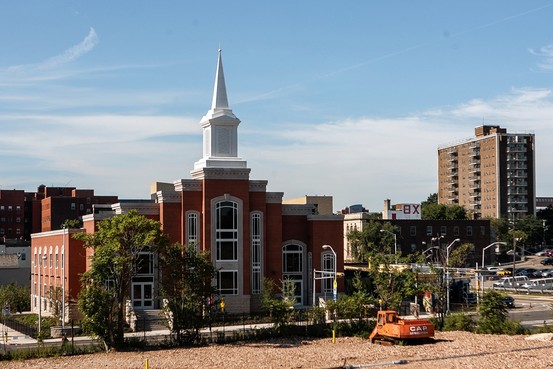 The Wall Street Journal noted the building of a 35,000-square-foot LDS church topped by a 45-foot steeple by writing an article  the LDS Church Newsroom deemed “Getting it right.”

“The church counts more than six million members in the U.S., making it the nation’s fourth largest, according to a 2012 ranking by the National Council of Churches. There were more than 127,000 church members in Connecticut, New Jersey and New York, up 10% from 115,000 in 2005, church figures show. The congregations spoke more than 50 different languages. The Mormon Church’s growing diversity was on display Sunday during a service in Newark, where women in African headdresses sat near many African-American and Hispanic believers.

“Asha Massaquoi, a 58-year-old Newark resident originally from Liberia, left her Muslim faith and converted in 1988 after a missionary knocked on her door when she was staying with family in Minnesota. Her family was confused, but Ms. Massaquoi said the church embraced her and she never looked back.

“‘The church has helped me a lot,’ said Ms. Massaquoi. I’ve begun to love people.’

“Two Mormon congregations were founded in Monmouth County 175 years ago. Today, the church counts 32,744 members in New Jersey. Other churches are in more suburban areas, such as Morristown, North Caldwell, East Brunswick and Short Hills. “