This article was written by Richard E. Bennett. 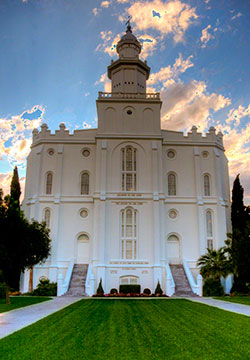 Editor’s note: As part of BYU Education Week, Richard E. Bennett will present his research on the importance of the temple to the Saints the early Church. The presentation will be Friday, August 23, at 12:30 in 455 Martin Building at BYU.

In 2005 I published an article in BYU Studies Quarterly with the intent to show that the dedication of the St. George Temple in 1877 was a watershed moment in the history of the development of modern Mormon temple work. Under the direction of Brigham Young, then in his thirtieth year as President of The Church of Jesus Christ of Latter-day Saints, and Wilford Woodruff, a member of the Quorum of the Twelve since 1838 and newly appointed president of the St. George Temple, the sacred ordinance of endowment for the dead was first performed.

Much of the inspiration for my former study grew out of my lifelong interest in the Mormon Exodus period in Church History and, frankly, from my surprise that although baptisms for the dead had begun in Nauvoo in 1840, and endowments for the living in 1842, the companion ordinance of endowment for the dead was not introduced into the Church for another thirty-five years. The balance of that former study traced the state of temple work from 1844 to 1877, culminating with the 1877 introduction of endowments for the dead.

The purpose of this sequel study, while reviewing some of the main points of the former paper, is to try to measure both quantitatively and qualitatively the impact this expanded paradigm of temple work had upon the temple consciousness of the Church membership between the years 1877 and 1900. I will conclude by showing that President Wilford Woodruff, so long a staunch defender of the practice of plural marriage, cast the question of continuing with the “Principle” in light of two competing priorities: “Which is the wisest course”-to continue plural marriage and subsequently lose four recently completed temples, and along with them lose the exciting, more expanded vision of salvation for the dead; or to cease the practice of a system of marriage increasingly difficult to defend and maintain against mounting legal, social, and political pressure?

The link to the pdf doesn't work...