LDS Fiction: Secrets Keeps You Glued to the Pages 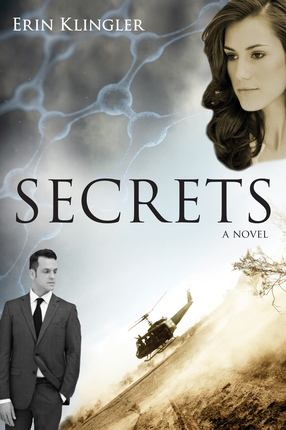 Anyone who enjoys the roller coaster ride kind of mystery/suspense story that keeps the reader glued to the pages and staying up until the wee hours won’t want to miss Erin Klingler’s Secrets. Cambry Sinclair hasn’t seen her father for six years and though he’s tried to contact her several times recently, she’s ignored his efforts. That is until she gets an urgent message just as she’s leaving a late meeting one night and decides to meet him and see what he considers urgent. His abandonment of her and her mother years earlier left her hurt and angry and with no inclination to forgive him. She arrives at his business to find him sprawled in a pool of blood at the bottom of the stairwell and nearly unconscious. Before the help she summons arrives and before he slips into a coma, he whispers a few words and phrases that make no sense to her along with desperate instructions to tell no one as he gives her a tiny thumb drive.

Ethan Reece is finally going home. When his big brother was killed in Afghanistan, he’d gone a little crazy, enlisted in the Marines, and left his family and the woman he’d planned to marry with nothing but a brief note. Following his stint in the military, he’d become an FBI agent, and was too ashamed of the way he’d abandoned Cambry and his family to attempt to contact them, but now he knows with his father facing surgery it is time to make amends. He doesn’t doubt his parents and twin sister will eventually forgive him, but he’s not so sure Cambry can. Just before catching his flight that will take him home on a long overdue vacation, his supervisor hands him a new assignment. He’s to get close to Cambry Sinclair to learn what she knows about the secret military technology her father had been working on before he was shot and discover whether or not she was involved in the attack.

Ethan and Cambry still have strong feelings for each other, but Cambry doesn’t trust Ethan and Ethan has guilt issues, not only for the way he left her before, but because he feels like he’s using her to get the information he needs and he knows she’ll be furious if she finds out he’s there on assignment. He’s angry when he discovers she’s being harassed by a local detective who seems to think she shot her father and stole the technology he was working on. The dealer who is trying to get the information for a secret sale to a terrorist group also thinks she has her father’s technology and is determined to force her to reveal its whereabouts. Cambry is determined to find a way to open the encrypted files on the thumb drive and to keep its existence a secret as per her father’s instructions.

Cambry is smart, competent, and stubborn, though small in stature. She’s also a little on the weepy side, lonely, and easily frightened or intimidated when the going gets rough, but she doesn’t lack courage. She also has a weakness for huge, slobbery dogs. Some of her personality traits seem contradictory, yet she comes across as believable and easy for a reader to grow attached to her. It’s easy to share her dilemma over trusting Ethan after being abandoned by her father, then Ethan, and catching on to Ethan’s deception. She can’t help wondering if she’s becoming more mature and forgiving by letting either man back in her life or if she’s being set up for more heartache.

Much of Ethan’s maturing process has already taken place off stage before he becomes involved with Cambry again. Still we see some definite movement toward making careful choices rather than impulsive reactions. The secondary characters are interesting and the author shows more of their development and motivations than is often the case in mystery/suspense novels. This adds to the depth of the story.

The plot moves well and is filled with rapid action. At several points a particular action is expected; it begins to play out as assumed, then careens off in an unexpected direction. Mystery/Suspense fans will have fun with this one.

Though Erin Klingler grew up in California, she now lives in southeast Idaho. Along with writing, being a wife, and mother of five children, she’s a medical transcriptionist. This is her third novel.