Education Week Feature: Empowering the Quorum of the Twelve 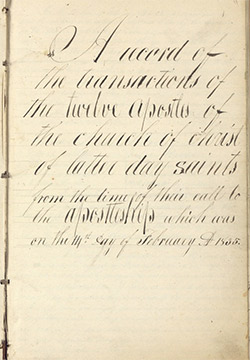 Editor’s note: As part of BYU Education Week, Ronald K. Esplin will present his research on one of the Church’s founding documents. It is a record of the call of the Quorum of the Twelve Apostles in 1835 and their first assignment, a mission to visit the branches of the Church in the eastern states. The presentation will be Tuesday, August 20, at 12:30 in 455 Martin Building at BYU.

The Joseph Smith Papers Project has recently published on its website a document created in 1835 and now known as the Record of the Twelve, 14 February-28 August 1835. This is the only known record created by the Quorum of the Twelve during its first several years. On March 12, less than a month after the Apostles were called and before all had arrived in Kirtland to be ordained, Joseph Smith proposed that they serve their first mission “through the eastern States to the Atlantic Ocean” and suggested an itinerary with ten conferences in the field.

Orson Hyde and William E. McLellin, members of and clerks for the Quorum of the Twelve, originally wrote not in a book but on loose pages (no longer extant) that they later copied into a large, permanent record book. This record may be thought of as consisting of three parts. The first three and a half pages record the calling and general instruction of the Apostles. The next three and a half pages document a series of meetings as quorum members prepared for their spring and summer mission, a series that included Joseph Smith’s April 26 “charge and instructions” to them and ended with a May 2 “grand council” consisting not only of the Twelve but of other leaders. The third part, the largest, consists of a twelve-page record of the conferences and other activities of the mission itself, including meetings of the quorum, conferences with members, and public preaching meetings that on occasion attracted audiences of hundreds (and in one case more than a thousand).

The schedule of conferences in the various branches was published in the Messenger and Advocate. The group departed on May 4, 1835. Seldom did these traveling officers spend funds on food or lodging. No doubt families in these eastern churches were pleased to host the elders from Kirtland, but there was also an obligation. Joseph Smith had expressly declared on the eve of their departure that the traveling officers “have a right by virtue of their offices to call upon the Church to assist them.” In places where there were no members to assist, they sought lodging as ministers (or “to be kept as disciples,” as they sometimes termed it) with anyone who would host them. What few funds they had went to transportation.

Although much of their travel was on foot and the occasional wagon ride was normally without charge, all took passage more than once on lake steamers. Stage travel was also a part of this mission experience; several of the elders traveled on the Erie Canal; and, in New England, at least Brigham Young and (separately) Heber Kimball traveled on one of the nation’s early railroads. Altogether, from May through September members of the traveling high council traveled not just hundreds but thousands of miles.

Eight of the ten conferences opened with a Friday session with members. These involved instruction and the sacrament, but also business (discipline, appointment of officers, and ordinations). Raising funds for the redemption of Zion in Missouri was always a topic, and to some extent funds for the building of the temple in Kirtland. The business of these sessions often spilled over to Saturday (and occasionally to Monday).

Generally the public preaching meetings fell on Saturday and Sunday. Monday often saw a concluding session (meeting, council, or preaching), after which members of the quorum could set out toward their next destination. Following the formal sessions, several of the traveling elders might linger to preach in the neighborhood, but most, sometimes all, set off two by two, preaching along the way to the next conference.

The mission was cut short when the Twelve were called back to Kirtland in early August. The Twelve as a quorum felt the sting of rebuke. They reproved for not emphasizing the temple in their visit with the branches, and they were charged with another infraction of proper order. Speaking of the Twelve as a quorum, “as far as we can learn from the churches through which you have traveled,” wrote Joseph Smith, “you have set yourselves up as an independent counsel [council] subject to no authority of the church.”

While Joseph’s letter did not expressly instruct the entire quorum to return home without delay, the now shortened schedule permitted a quick return and no doubt their concerns, and their desire to resolve the difficulties, required it. They quickly returned to Kirtland and resolved the difficulties and reconciled with Church leaders there.

The summary with which Heber C. Kimball closed his mission account no doubt spoke for his companions as well. “A considerable portion of this mission was performed on foot, and I suffered severely from fatigue and blistered feet, which were sometimes so sore I could not wear my boots nor proceed without. I was frequently threatened and reviled by unbelievers, and had great difficulty in finding places to sleep and procuring food to eat.” The Apostles reported that “the nature of our mission to the east was peculiar, and required us to spend most of our time among the various branches of the church; however, as we had opportunity we proclaimed the gospel in every place where there was an opening, and truly there is an effectual door opened for good and faithful laborers among the intelligent and liberal people of the east.”