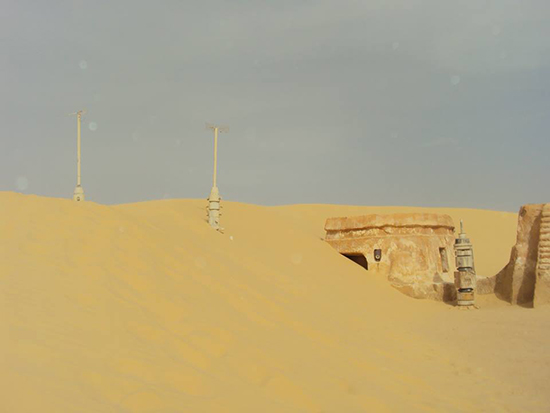 New research describes a fast-moving sand dune in Tunisia that is spilling onto the streets of the Star Wars set used to portray Anakin Skywalker’s childhood home.

BYU professor Jani Radebaugh visited Mos Espa in 2009 and observed a nearby dune measuring 20 feet tall and 300 feet wide. Mos Espa is notable in the film for its annual pod races, and Radebaugh and other scientists utilized Google Earth to calculate how fast the dune raced toward the town. With images dating back to 2002, they clocked the dune at speeds of 50 feet per year.

“In terms of geologic time scales, it’s one of the fastest things we see happen, aside from lava flows and landslides.” said Radebaugh. “You can compare it to some glaciers, but even most glaciers tend to move slower.”

Coincidentally, Radebaugh credits the Star Wars films for sparking her interest in planetary science. Ordinarily she teams up with NASA to study moons of Saturn and Jupiter. But a visit to Tunisia with other planetary scientists prompted the dune research that the journal Geomorphology recently published.

“It’s so fun to see geology in action,” Radebaugh said. “We live on a dynamic planet.”

The set of Mos Espa began attracting tourists in 1999 following the release of “Episode 1: The Phantom Menace.” Prior to that, people had visited some of the 1970’s-era Episode 4, 5 and 6 sets, which have since been overrun by dunes. Bulldozing the dune to save the set isn’t an option, as a larger dune follows on the heels of the first dune. The most feasible plan to rescue the site would require moving everything about 200 meters to the south.

However, it may be too late for a rescue operation – recent photos from Radebaugh’s local collaborator show one dwelling and a pair of “moisture evaporators” partially buried.

“Sometimes we just have to move out of the way,” Radebaugh said. “The sand people in Star Wars are nomads, right? Maybe they are nomads because the sand moves.”

It's a movie set. Why save it? How about focus on the real problem of the movement of the desert that is causing displacement of real people due to famine.

China has a well developed method of stopping dune encroachment by covering the dune with mats and planting in the mats. I have seen many hectares reclaimed using the method.