Remnants from the collision of over twenty fragments of Comet Shoemaker-Levy 9 with Jupiter in 1994 still comprise 95% of the detectible water in Jupiter’s atmosphere today. This discovery was possible thanks to one of the last observation missions of the infrared Herschel Space Telescope. A few days after the observation, the Herschel spacecraft ran out of its liquid helium coolant and will now have to be shut down.[1]

An article now online from the May 4, 2013 issue of ScienceNews reports on research showing the detection of upper atmosphere water deposits that originated with the comet’s collision with the massive planet.[2]

“In July 1994, the comet Shoemaker-Levy 9 plowed into Jupiter, and the comet fragments triggered dark scars of debris in the giant planet’s atmosphere that were visible for weeks. The comet also left behind a more permanent deposit: millions of gallons of water. Water from the impact still makes up at least 95 percent of the water in the planet’s upper atmosphere, researchers report April 23 in Astronomy & Astrophysics.”

Last orbit around Jupiter for Comet Shoemaker-Levy 9 fragments. The orbit was also inclined almost vertical, to the main plane of the solar system orbits, known as the ecliptic.

The comet had been captured by Jupiter probably in the 1970’s and was orbiting the planet with a period of about two years. During its last approach to Jupiter on July 7, 1992 the comet came within 70,000 km. of Jupiter’s cloud tops and was broken into at least 21 pieces. With a highly elliptical and almost vertically inclined orbit stretching out to 50 million kilometers, the comet pieces continued to orbit the planet and it was on this last orbit that it was discovered. The Sun’s gravity had slightly changed the comet’s orbit and scientists realized that on its next approach the comet would be “eaten” by the giant planet. From July 16 to July 22, 1994, the comet pieces disappeared into Jupiter leaving giant impact scars in Jupiter’s atmosphere from the collision explosions.

This collision demonstrated the important role that Jupiter plays in minimizing comet and asteroid debris in the inner solar system and protecting the earth from life-ending calamities from frequent asteroid collisions. Jupiter is almost like a “cosmic vacuum cleaner” or “cosmic sling shot,” either consuming asteroids and comets or sending them careening out of the solar system.[4] 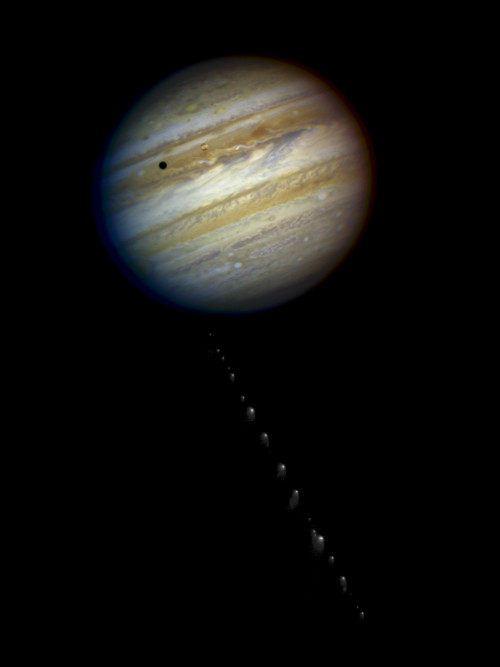 In 2000, John Pratt and I wrote an article about this collision, which was considered by many astronomers to be the “astronomical event of the century.”

“The impact from the collision of just one of a score of comet fragments with the giant planet had energy estimated at six hundred times that of the combined nuclear arsenals of Russia and the United States. The dark cloud of the explosion shown in the photo sequence is larger than our entire planet earth. Astronomers were shocked to actually witness an event that had been estimated to happen only once in millions of years in the solar system.”

This collection of photographs shows the impact scars of some of the 20+ fragments of Shoemaker-Levy 9 after colliding with Jupiter in July 1994.

This is the Herschel Observatory’s infrared map of water molecules in Jupiter’s atmosphere. The red and green represents the most abundant deposits which are concentrated in the southern hemisphere where the comet collision occurred.

“While many scientists do not yet support the account of many of the catastrophes described in the Bible which were much bigger than the Tunguska collision [in Russia in 1908], such as the Great Deluge, the terrible catastrophes described in the Bible are supported by the testimony of modern prophets. The collision of comet Shoemaker-Levy 9 with Jupiter has triggered serious scientific study of these events that once were considered so rare that we would never see such an event in our lifetimes.”[7]

In our day, the tracking of small asteroids and comets is now part of important NASA space programs and is exemplified in reports of the recent Russian meteor strike and the near miss of the small asteroid 2012 DA14 (see links to my articles starting here  and the documentary recently broadcast by PBS on NOVA here).

A large 1.7 mile long asteroid will pass within 3.6 million miles of earth on May 31st. [8] Such a large asteroid is similar to the one believed to have caused the extinction of the dinosaurs millions of years ago.

A lot of the motivation to establish these near-earth object space programs that are frequently in the news can be traced to this “astronomical event of the century” when Comet Shoemaker-Levy 9 collided with Jupiter.

“The largest infrared space telescope ever launched has run out of cryogenic coolant, permanently ending its science operations.”

“Herschel launched May 14, 2009 with the Planck satellite and was the first space observatory to cover far-infrared to submillimeter wavelengths, its observations spanning 55 to 672 microns. Both spacecraft went to L2, the second Lagrange point in the Sun-Earth gravitational system where a small mass can basically “hover” without being pulled this way or that.”

“Herschel’s 3.5-meter primary mirror worked with two cameras (both with spectroscopic abilities) and a high-res spectrometer, all of which were cryogenically cooled by superfluid liquid helium to a couple of degrees above absolute zero, -271C (-456F) – as least until Herschel ran out of coolant.“

“Another water discovery came in late April from Herschel: the detection of water in Jupiter’s upper atmosphere, left there by Comet Shoemaker-Levy 9 in 1994. Even though it’s been nearly 20 years since the comet smashed into Jupiter, Herschel’s observations show more water in the southern hemisphere (where the comet hit) than in the north and suggest that 95% of the planet’s current water comes from that comet.”


“Telescopes had previously spotted water in Jupiter’s upper atmosphere, some 100 kilometers above the planet’s ammonia cloud tops, but those surveys could not determine where the water came from. So astronomers used the European Space Agency’s Herschel Space Observatory to create a high-resolution map of water vapor distribution throughout Jupiter’s atmosphere. The researchers, led by Thibault Cavali at the Laboratory of Astrophysics of Bordeaux in France, found that the concentration of water peaked in the planet’s southern hemisphere, right in the region where the comet struck.”

Ray Newburn, “The Comet about to smash into Jupiter,” Astronomical Society of the Pacific, 1994.

“The fragments of Shoemaker-Levy 9 move around Jupiter. This schematic is not drawn to scale. For example, the distance to apojove (the comet’s farthest distance from Jupiter) is actually almost 1,200 times the distance from Jupiter at which it was disrupted, and the true representation would be a long narrow ellipse that looks almost like a straight line out and back. The length of the line should be 350 times the diameter of Jupiter and the disruption a tiny dot less than a quarter of the diameter above Jupiter. (Courtesy Z. Sekanina, P.W. Chodas, and D.K. Yeomans)”

“Calculations showed that its unusual fragmented form was due to a previous closer approach to Jupiter in July 1992. At that time, the orbit of Shoemaker-Levy 9 passed within Jupiter’s Roche limit, and Jupiter’s tidal forces had acted to pull the comet apart. The comet was later observed as a series of fragments ranging up to 2 km (1.2 mi) in diameter. These fragments collided with Jupiter’s southern hemisphere between July 16 and July 22, 1994, at a speed of approximately 60 km/s (37 mi/s) or 216,000 km/h (134,000 mph). The prominent scars from the impacts were more easily visible than the Great Red Spot and persisted for many months.”

“Astronomers estimated that the visible fragments of SL9 ranged in size from a few hundred metres to two kilometres across, suggesting that the original comet may have had a nucleus up to 5 km (3.1 mi) across – somewhat larger than Comet Hyakutake, which became very bright when it passed close to the Earth in 1996.”

“The impact of SL9 highlighted Jupiter’s role as a kind of “cosmic vacuum cleaner” (or in deference to the ancients’ planetary correspondences to the major organs in the human body, a kind of “cosmic liver”) for the inner Solar System. The planet’s strong gravitational influence leads to many small comets and asteroids colliding with the planet, and the rate of cometary impacts on Jupiter is thought to be between two thousand and eight thousand times higher than the rate on Earth.[36] If Jupiter were not present, the probability of asteroid impacts with the Solar System’s inner planets would be much greater.

“The extinction of the dinosaurs at the end of the Cretaceous period is generally believed to have been caused by the Cretaceous-Paleogene impact event which created the Chicxulub crater,[37] demonstrating that impacts are a serious threat to life on Earth. Astronomers have speculated that without Jupiter to mop up potential impactors, extinction events might have been more frequent on Earth, and complex life might not have been able to develop.”

“Nearly twenty years after this major impact, astronomers are still observing its consequences on Jupiter. T. Cavali and his colleagues observed Jupiter with the ESA Herschel Space Observatory, which is sensitive enough to map the abundance of water vs. latitude and altitude in the Jovian stratosphere. These observations, which have now been published in Astronomy & Astrophysics, show a clear north-south asymmetry in the distribution of water, with more water in the south. They indicate that 95% of the water currently observed on Jupiter comes from the comet.”

“One of the reasons for disbelief of John’s prophesies in the Book of Revelation has been that the catastrophic events described were believed to be so rare that they could only be expected to occur once in millions of years. The moon is covered with craters believed to have been caused by impacts, but the youngest of these craters is believed to have occurred millions of years ago. Instead of being explained away as just figurative descriptions, the collision of this comet with Jupiter brings this description by John to the realm of modern day reality.”

“An asteroid nine times larger than the QE2 is due to sail past the Earth later this month. Luckily, the giant space rock will get no closer than 3.6 million miles, or 15 times the distance between the Earth and the moon. Scientists have named the asteroid 1998 QE2 but the name has nothing to do with the transatlantic Cunard liner – it follows a code used for newly-discovered asteroids by the US Minor Planet Centre in Cambridge, Massachusetts.”

“The asteroid will not make a return trip to the Earth for at least another two centuries.

In 2016 NASA will launch a robotic sample return mission to one of the most potentially hazardous known near-Earth objects (NEOs), the asteroid (101955) Bennu. The asteroid, which measures a third of a mile across, comes within 500,000 kilometres of the Earth every six years. Scientists have calculated that in 2182 there is a one in 1,800 chance of the object colliding with the Earth.”