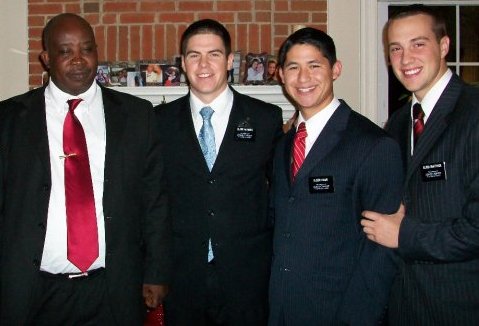 I would like to share the story of Victor.  Elder Baldwin and I tracked into this wonderful man on a hot muggy afternoon on the east coast near the Chesapeake Bay.  He graciously invited us right into his home and listened carefully to our brief introduction about the Restoration.  He said that we could come back the next day for a longer discussion and so on our return visit, we taught him a powerful lesson about the restoration of the gospel to the earth again in its fullness.  It was one of the most spirit-filled first lessons in which I have ever participated.

Victor told us a little bit more about his former life as a minister in Africa.  We learned that he had been a paid minister for many years in Liberia, Africa, before immigrating to America about 10 years earlier.  Here he had become a lay minister in his local Christian church, where he was loved and respected.  We invited him to attend church with us the next Sunday and to our surprise he immediately agreed!  He came to church at the local ward as he promised and loved every minute!

Our next lesson was even more powerful.  We watched the Restoration movie together.  Victor felt the Spirit so strongly!  Victor told us he believed that Joseph Smith was a true prophet of God.  He said that for many years as a minister, both paid and unpaid, he had been preaching salvation through Christ but had never felt the Holy Ghost as strongly as he had during our lessons and church meetings.  We invited Victor to be baptized and he excitedly agreed and we scheduled a date.

On our next appointment we brought along our mission president.  Before the lesson started, Victor asked if we could sing some hymns together.  He wanted to sing a couple of his favorite hymns from his church and then we sang two popular hymns from the LDS hymnal.  The music brought the spirit into the room which remained throughout our entire lesson.

As we were walking out his door to head for home, he asked, “Elder Withers, will you please baptize me?”  Of course I accepted!  He had become a dear friend by this time.

The next hurdle was for Victor to tell his friends and congregation that he would be joining the Mormon Church and leaving their membership.  When he told his friends at church what he was about to do, and the decision that he had made, he faced many storms of opposition.

Throughout the long ordeal of listening to friends and relatives try to convince him that he was making a terrible mistake, Victor remained resolute. He told his friends that “my mind is made up.”

Even his father from Liberia, Africa called him in a futile attempt to persuade him to drop his baptismal plans.  Others called him from Africa and the local area. Some evenings he had several visitors from his church, including the local ministers, come to visit at his home to persuade him to drop his plans.  But throughout all the strong opposition, he remained strong and committed to his decision. He continued to attend church with us as weekly, as he daily studied in the Book of Mormon to learn more about his new found religion and prepare for baptism.

Every lesson was filled with the spirit.  His baptism was very special.  He had been a faithful follower of Christ for many years, but now with the Holy Ghost as his constant guide and companion, he blossomed.  After his baptism he became an effective Sunday school teacher.  His years of studying the scriptures made him a powerful defender of the faith.  He was an articulate and a gifted speaker.  Shortly after his baptism he preached to a large crowd at a mission fireside attended by many investigators.

I love this great work.  It is so wonderful.  I have never been happier in my life.  I testify that God lives and is our Father in Heaven and that this church contains the fullness of the everlasting Gospel.