A hostage situation goes bad and Detective Colby Black is devastated. He is part of a crack hostage negotiating team, who has always had some misgivings concerning his skill as a sniper. He makes his way home and is surprised to see someone has moved into the long vacant house next door and there is smoke coming from the house. Springing into action, he rescues his new neighbor, Sophia Naziri, and puts out the fire. His offer to help clean the smoke blackened kitchen is rebuffed and the take out dinner he takes her is almost rejected. 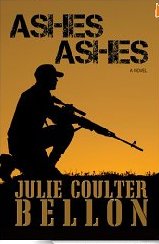 Ashes Ashes is the second book Julie Coulter has written concerning a member of a hostage negotiation team. Most of her books have an international setting and deal with events such as terrorist attacks, but this one takes place primarily in the United States, Connecticut and New York, though an important part of the story does occur in Bulgaria and the terrorist group involved is international.

Sophia can’t believe her luck to have moved next door to a police detective when she is hiding from federal officers who want to question her concerning the murder of a US senator. Colby is an attractive man and she appreciates his thoughtfulness, but she must discourage his attention. Not only is she a murder suspect, but she’s hiding a satchel holding a million dollars in cash and a small bag of diamonds, her father is missing, and she suspects it’s not only the law searching for her.

In spite of Sophia’s determination to stay aloof from Colby, they are drawn to each other and a friendship develops. Colby foils an attempted break-in at her house and assumes the man he pursues is a burglar, but Sophia knows much more is involved. She quickly makes two stops to follow up on clues her father left her, one of which ends in gunfire, then disappears. Colby learns of the search for her and of her possible link to an international terrorist group. He is assigned to work with the team representing various government law enforcement groups and begins to suspect someone on the team can’t be trusted.

Bellon creates characters that are vibrant and multi-dimensional. Colby deals with conflict from a two pronged angle. He is committed to going by the book and maximizing his personal talents and skills, yet he’s a deeply compassionate person with strong feelings of loyalty and trust for those he cares about and those who hold positions of authority over him. He has close friends. Sophia is highly intelligent, not so trusting, and has learned to depend on her own instincts and abilities. She loves her father and wishes to protect him, no matter what he may be involved in.

The plot is full of action and keeps a fast pace. The author demonstrates a good understanding of police procedure and of world affairs in both the background and action of the story. The details are graphic in places, but put in a perspective that keeps them from being offensive. Bellon uses an interesting writing device in setting up the ending to almost mirror the beginning. Fans of action novels will enjoy reading Ashes Ashes.

Julie Bellon grew up in Canada but now lives in Utah with her husband and eight children. She has traveled to many different countries and has taught journalism for BYU for fourteen years which might explain her keen interest in international events.