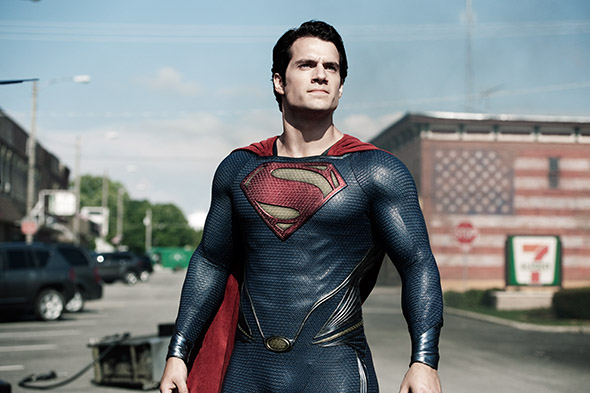 Looking for a fun flight through space this summer? Man of Steel delivers. Of course any film with Christopher Nolan at the helm is destined to be a slam-dunk.

Ensuring that this Warner Brothers’ first of a trilogy will become an international multibillion-dollar franchise, the producers have stacked the deck with an all-star cast, including Amy Adams, Russell Crowe, Kevin Costner, Diane Lane, Lawrence Fishburne and Michael Shannon.

Not bad support for relative new-comer, Henry Cavill, whom audiences will readily embrace as Superman. When he enters the scene, shirtless, listen for the audible gasps from the female contingent then pay attention to the male population taking mental notes to re-up their enrollment at the gym.

Yes, Man of Steel is fun, but it definitely merits its PG13 rating for infrequent expletives and violence, mostly destruction scenes and combat. It’s pretty intense for little children. And come on, Amy, are the crude remarks really necessary? Offensive remarks border on clich character development.

Let me also warn readers that the movie is not a feel-good flick. In Nolan tradition, the script is a serious approach to the Superman story like Dark Knight is to Batman. However, Nolan doesn’t take us too far adrift. He strikes a nice balance of preserving the core story while providing tantalizing twists that pique the imagination and hold our interest.

Kal-El is born on the imploding planet, Krypton. Launched into space by his parents to save his life and to become a savior of humankind, the infant falls to Earth to become Clark Kent of Kansas. But which world does he belong to? With one foot in Krypton and the other on Earth, which world does he fight for? The movie is a story of discovering one’s identity and purpose and the attendant choices. 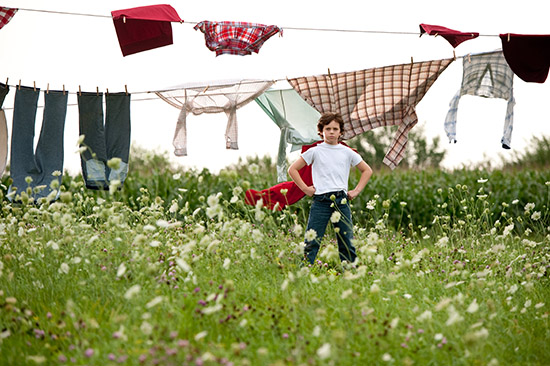 Co-screenwriter, David Goyer, said, “The film is very much about choices. It’s about a man with two fathers: Jor-El, Kal’s Kryptonian father, and Jonathan Kent, Clark’s dad on Earth. Clark/Kal has grown up with two sets of histories, though only one was known to him until now. And now he needs to reconcile those teachings if he is to become the man that, arguably, both fathers would want him to be, in their own ways.”

Are there flaws in the screenplay? Yes, albeit minor ones. The script tries to be a lot of things simultaneously. For example, the storyline is structured much like a hero’s journey (think of Lord of the Rings), but two hours is simply not enough time for the character to believably transform from a reluctant, identity-challenged savior with a small “s” to a full-blown Savior of the world with a capital “S.”

You’ve guessed by now that Kent is blatantly a Christ character in the movie. The writers are not subtle about drawing parallels. That is not a criticism. In fact, I found the writing tasteful and creative. For example, the 33 year old hero has been infused with all lives within him. Thrust into a fallen place where he must live like and see the worst in mortals, he chooses to rise to the charge of his exalted father, Jor-El, to save humanity from a master villain who was thrust out of Krypton and is now bent on annihilating Earth’s flawed, imperfect race. Notice that Jor-El and Kal-El are obvious Hebrew derivations meaning “Jor of God” and “Kal of God.”

After retreating to a church setting with a stained glass portrayal of Gethsemane behind him, Kent finally finds himself and subsequently offers himself as a sacrifice for Earthlings, standing between them and the destructive force of evil. Previously instructing his chosen son, Jor-El says, “You will give the people of Earth an ideal to strive towards. They’ll race behind you. They will stumble. They will fall. But in time, they will join you in the sun. In time, you will help them accomplish wonders.”

Enough said. You can pick out the other Christ parallels.

Henry Cavill and Amy Adams definitely have chemistry, but developing a credible romance seemed a little wimpy from a writing point of view. Once again, the movie has too much going on to develop a believable romance. Good love stories maintain a long tension and endure impossible obstacles until finally, at the very last minute comes the kiss, and the prayers of the audience are answered. In Man of Steel, we are never allowed much time to invest in the relationship, therefore we don’t experience the sensation of a grand crescendo when the characters finally embrace.

But the kiss was fun, nevertheless. As I said, these flaws are little things. The only perfect script, in my opinion, is The Sting. I measure all other screenplays by that standard.

Man of Steel is peppered with backstory, which takes a skilled artisan to pull off. Any writing teacher will tell you that taking the audience away from the “through story” is dangerous because it can cause confusion and hinder the pacing. Never give the audience time to catch its breath. But credit Nolan and Goyer for writing a backstory that moves the story forward and rivets our attention on the character that is saving us.

I give Man of Steel three of four stars. I would give it another half star if the Armageddon sequence were shorter. How much devastation do we need before we get the point? The film will be released in 2D and 3D in select theaters and IMAX, and will be distributed worldwide by Warner Brothers. Go see it. If you’re a girl, you will swoon; if you’re a guy, you will chuck the burgers and get back to the gym.

While calling Superman a Christ figure isn't wrong, it would be more accurate to call him messianic, since the original creators and authors are Jewish. The best Superman stories (Kingdom Come, Red Son, The Nail) are about how he deals with his power and responsibility. No previous movie made such an effort to tell this kind of story. Superman stories that try to do this and fail are trite, successful ones show a man who is "Truth, Justice, and the American Way." This one succeeds--the first Superman movie to do so. Didn't notice swearing, but I usually don't. I don't have much use for it, but plenty of people I know have a different vocabulary.

I was sorely disappointed to find foul language in the film. I suppose there wasn't a lot of it, but there was NO cause for any of it! It did nothing for the story. Lois Lane may be a "tough as nails" reporter but the Lois Lane I grew up reading didn't rely on foul language to get her point across, she was wittier than that!