Don't Judge a Book of Mormon By Its Cover: How Mormons Are Discovering the Musical as a Conversion Tool | Meridian Magazine

Don’t Judge a Book of Mormon By Its Cover: How Mormons Are Discovering the Musical as a Conversion Tool 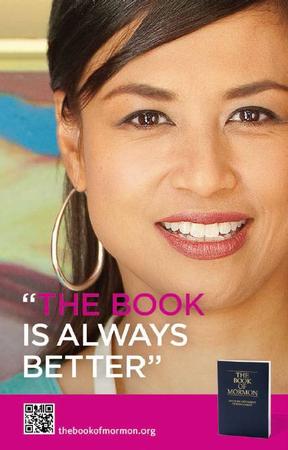 Danielle Tumminio blogs for The Huffington Post–and perhaps it is because she is a reverend or sensitive to the sacred–she did a particularly good job talking about The Church of Jesus Christ of Latter-day Saints in a recent article she posted.

Her topic was how the LDS Church is using “The Book of Mormon” Broadway show as a conversion tool-and she captures and comprehends how remarkably savvy the Church has been in response to this show. So much about this show is offensive to Latter-day Saints. It is foul-mouthed and blasphemous. It mocks our scriptures-yet instead of boycotting it or responding with defensive anger, the Church has done something astonishing. It has put ads, like the one above, in the Playbills with messages like “You’ve seen the play…Now read the book.” That forbearance alone, has won the approval of those who might join in the chorus of derision.

Tumminio reports that when she attended the play, she met two missionaries, Elders Skyler Fenn and Jacob Chapman, near the theater door handing out copies of the Book of Mormon to strangers.

She says, “Street contacting is challenging, and the Elders experienced that firsthand during the months they’ve served as missionaries: People ignore them or cross the street. In a couple of hours, they might hand out only a few copies of their Scriptures.

“So that’s what they expected to happen at the musical.

“Instead, they handed out 40 copies — an entire box — of the Book of Mormon in under an hour. One girl ran up to them to get her picture taken once she realized that the missionaries were real Mormons and not actors. Later, a member of the cast named Kevin Mambo tweeted a photo of the three of them taken by a security guard. The missionaries forwarded it to their families.”

She says that one Jewish woman went to far as to suggest improvements such as holding a forum after or a discussion group at a nearby bar.

“Elder Chapman and Fenn’s presence at the musical seemed to humanize concepts like “missionary” and “Mormon” for the audience, maybe even dispelling the reputation the religion has for being sober and straight-laced. As Elder Fenn told me, That was kind of my intent, just to go there and be like, Hey, we can take a joke.”‘

Tumminio explained, “Elder Clifford Herbertson, an LDS Church leader, explained… , When people get to know a member of our faith, misperceptions and misunderstanding quickly disappear and are replaced by mutual respect and friendship; these adverts are in no way a tacit endorsement of the play but we want those who have questions to know where they can find real answers.”

She is impressed that LDS Church is reversing traditional conversion methods, where the emphasis is on teaching doctrine first. “The idea is that if you know what a religion believes, you’ll come to believe it yourself, and then become part of a community of believers. Instead, the LDS Church now seems to be embracing a different approach — meet us, become part of our community of believers, and you’ll come to believe in the faith yourself and become more familiar with the religion’s dogma as a result.”

Tumminio said, “And yet, when I thought about how the audience responded to these missionaries, I realized that their welcome and their enthusiasm was pretty ironic, given that the musical is intent on poking fun at Mormons, not on garnering potential converts.

“So I wondered: Does it actually work? Can a musical that mocks a religion humanize and even bring people toward it?

So she sought out a woman in Boston who had become converted after first seeing the musical and told her story.

“It occurred to me then that maybe the Mormon Church was doing something really smart in cultivating relationships with people who saw the musical. Yes, the musical might make fun of Mormons. Yes, the musical has a message that Mormons probably shouldn’t embrace if they want to remain true to their tradition. But that doesn’t preclude it from being a vehicle that God uses to speak into people’s lives. After all, many people find faith after experiencing a trauma, after making bad choices or struggling with addictions to drugs or alcohol. None of these things are or should be embraced by any religion. But most religious leaders would still agree that those experiences can teach us something valuable, and that God can teach through them.”

This is an article worth reading, particularly because the author is genuinely interested in what the Church is doing in its response to a musical that derides us.

I've been very impressed with the Church's response to this musical. Other churches might have staged protests. The only thing that would have accomplished would be more attention for the play. Instead, people have become curious about the real faith and the real Book of Mormon. The musical is far from what could be called "inspired." However, the Church's response to the musical certainly has been!