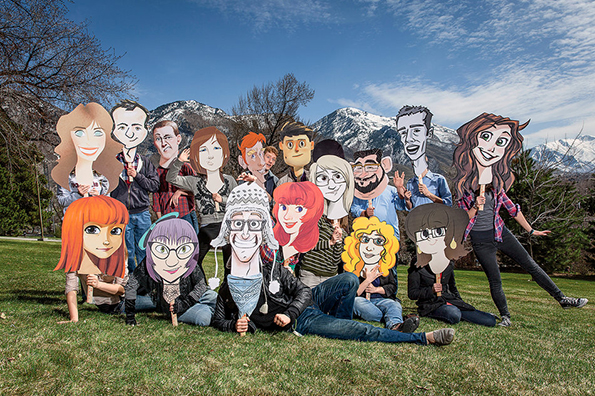 The New York Times went to Brigham Young University to find out why Hollywood is pulling so many students out of the animation department to fill roles at top studios like Pixar.

Reporter Jon Mooallem writes   the short, animated films made by BYU students “have consistently racked up student Emmys and student Academy Awards. They’ve played at Cannes and Sundance. Most important, they’ve impressed recruiters. Out of nowhere, B.Y.U. – a Mormon university owned and operated by the Church of Jesus Christ of Latter-day Saints – has become a farm team for the country’s top animation studios and effects companies.”

“(See, for example, Las Piatas,”  about two anthropomorphic piatas who, having been hoisted up at a child’s birthday party, panic and reconsider their careers.)

“Praising the program in a speech on campus in 2008, the president of Pixar, Edwin Catmull, noted: “It’s the perception not just of Pixar, but also at the other studios, that something pretty remarkable is happening here.”

That comment that was circulated widely motivated students from across the globe to send applications to BYU programs wanting to apply. To their inquiries, the head of the BYU animation program R. Brent Adams, simply sent them a copy of BYU’s Honor Code. Adams told the reporter, “I never heard from those people again.

In addition to the obvious skill of the BYU students, what impressed Mooallem was why they wanted to be in film. “The B.Y.U. program is designed to be a similar kind of ethical counterweight: it’s trying to unleash values-oriented filmmakers into the industry who can inflect its sensibility. Without being preachy about it,’ Adams told me, if we can add something to the culture that makes people think about being better human beings – more productive, more kind, more forgiving – that’s what we want to do.’

It was clear to Mooallem that the issue wasn’t just about making “clean films”, a term he had trouble pinning down-but more importantly films that you walked away from feeling uplifted.

“‘Honestly,’ says Marilyn Friedman, the former head of outreach at DreamWorks, who visited B.Y.U. frequently, the first few times I went to Provo, I was like: What am I doing here? I’m a little Jewish girl from back East. But I was just amazed by how absolutely lovely those kids are. They couldn’t be nicer, humbler, more respectful. It’s a pleasure. And when they come here, they stay that way.’ Many students are already married with children by the time they graduate; they want to excel at their jobs to give their families stability. Many have served missions abroad, often deposited in third-world countries amid great suffering, and are years older than the typical college student by the time they graduate. It means there’s a maturity level there,’ says Barry Weiss, a longtime animation executive and former senior vice president at Sony. If I’m a senior executive and I want to get people on my team, they’ve got to be hard-working and serious people. They’ve got to understand that this is a business – it’s not just art for art’s sake. The kids coming out of B.Y.U., they’ve got that box checked.’

“Many of the students I met in Provo grew up in insular, Mormon communities. They came from what’s dismissed as flyover country. They don’t smoke or drink, and I noticed that one faculty member, for example, kept saying, Holy schnikeys!’ whenever he wanted to curse. And yet creative types in Hollywood kept raving to me about how much more worldly’ these Mormons were than the moody, Gen Y art-school grads coming out of New York and Los Angeles and how grateful they were to have them onboard. This cut against so many different stereotypes – of Mormons, of Hollywood, of tortured artsy kids – and at the oddest angles. By coincidence, it seemed, Mormon culture was grooming its young people to be ideal employees of the same industry it predisposed them to be wary of.”

This article is worth the read.

A wonderful article...and not just because my son Garrett Hoyos is quoted! I can tell you how much time and effort these kids put into the program. Last night on the phone Garrett told me he feels like he is on vacation during Spring term because he is only working 60-80 hours a week rather than double that of Winter semester. He loves what he is doing and nothing but praise for all of his professors in the program.