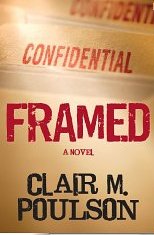 Clair M. Poulson has been entertaining readers with mystery/suspense novels that keep the reader guessing, a touch of romance, the everyday incorporation of faith in people’s lives, and an insider’s look at law enforcement for close to two decades. His newest book, Framed, is one of his best novels to date.

Remember that old adage, No good deed ever goes unpunished? Framed begins like that. Adriana Chambers is on her way home when she spots a clumsy, unattractive man helplessly staring at a flat tire. She stops to help him, but can’t get the hub cap off and the man, Jerzy Gabowski doesn’t even own a screw driver or any such tool to remove it. Since her home is just four blocks away, she promises to go get a tool and be right back. She’s delayed by a phone call and when she returns, she sees him driving away with what appears to be a passenger in the seat beside him. Soon Jerzy is in jail for the murder of a prominent attorney, Adriana and her mother are receiving death threats, and the young officer, Brad Osborne, who is assigned to the case is setting off her romantic radar. He’s also facing orders from his superiors that conflict with his gut instincts concerning the evidence found in Jerzy’s car and Adriana’s statement.

Adriana’s father recently divorced her mother and Adriana is not on the best of terms with him. He was a friend of the murdered man and both she and Brad suspect he knows more than he’s saying about the feud between two major crime bosses. However when he learns his daughter’s life has been threatened by someone he knows very well is ruthless and cares nothing for anyone’s life, he becomes angry and gets involved, but can the officers assigned to protect her, Brad, or her father stop a determined assassin who has been ordered to make certain she doesn’t testify.

Poulson’s characters are fleshed out just enough to make them feel like real people, but not so much they bog down the reader’s imagination. His main characters are bright, attractive people and are clearly LDS. His villains are plain evil, but he also includes a number of secondary characters who are good people with flaws or not-so-good people with redeeming characteristics. The plot swirls around two competing mafia style groups, one of which is headed by a man who is about to go on trial for some of his crimes and whose lead attorney is the murder victim. The other one wants his competitor to go to prison. Both employ men who arrange accidents or otherwise remove obstacles, steal evidence, or plant evidence. The story builds in a satisfying way and concludes with an abrupt surprise ending.

Clair Poulson is a retired law enforcement officer and is currently serving as a justice court judge for Duchesne County. He has served on numerous local, state, and federal law enforcement boards and councils. He assists his son in operating their family grocery store and in running the family’s ranch. He and his wife, Ruth, are the parents of five adult children and the grandparents of twenty-three grandchildren. Framed is his twenty-third published novel.