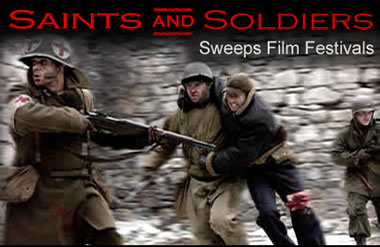 War movies like Pearl Harbor and Saving Private Ryan are big budget affairs and it should be impossible to produce a decent one on a million-dollar tab, but that’s what the creators of Saints and Soldiers did.  In fact, it is not just a decent film, but a remarkable one that has taken the top honors-a clean sweep–in 15 film festivals, where the audience has voted the film in as their favorite. 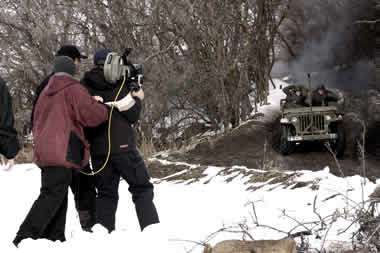 This is because Saints and Soldiers achieves what has become all too rare in movies these days-creating characters you are emotionally attached to and whose gripping and sophisticated story lingers with you long after the credits have rolled.  In this case the attachment is particularly for a soldier nicknamed Deacon, who is in Germany fighting in World War II after having spent two years there as a missionary. 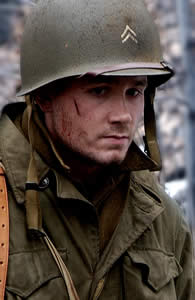 On Dec. 17, 1944, German soldiers opened fire on a group of unarmed American prisoners near the Belgian town of Malmedy, killing 86 of them.  Saints and Soldiers follows the story of four of them who escape into the freezing woods, without food and armed with only one German rifle. Sgt. Gunderson (Peter Asle Holden) takes charge of the group; a Louisiana, down home boy named Kendrick (Larry Bagby) loves card tricks and nicotine; Gould, a Red Cross worker is a cynic from Brooklyn and Greer (Corbin Allred) is a Latter-day Saint from Snowflake, Arizona-though his religious affiliation is never mentioned.  The filmmakers intentionally kept the film nondenominational.

These four are behind enemy lines, but the Germans are retreating so they might have hunkered down, hidden and been safe, except for meeting Oberon Winley (Kirby Heywood), a British paratrooper with intelligence that the Allies beyond the German lines must urgently receive.  Allied lives depend on the receipt of this message so the five of them set out in a gripping journey where they must not only survive winter and starvation, but the relentless threat of the enemy.

If this were an action-driven plot, the story line could have been enough, but this is a film that explores character and deeper issues of conscience.

It is a rare thing in a movie to see a religious character who is much more than a caricature.  Hollywood has carefully taught us in movies that the religious are either hypocrites or flim-flam men, zealots or irrational.  They are not to be trusted or they are hopeless simpletons. Yet, a world minus God and a moral landscape where decisions matter and carry consequence is arid and flat.  This explains why so many of today’s films focus on contrived plots or frenetic action and special effects.  The writers have nothing to say in a world where nothing matters very much. 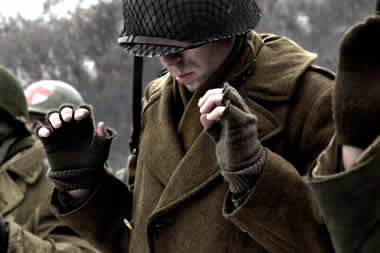 How refreshing it is to see a character who takes God seriously, sees the enemy with some compassion, and is caught in the moral complexities of war.  Here, answers are not facile or easy and the contradictions of the human experience play out. It feels real to audiences, because it is real. This is where Deacon finds himself.

Deacon is devoted to his faith; if it weren’t for the war he’d be home looking forward to the birth of his first child.  He is fluent in German and during his mission developed loving ties with German friends.  How strange for him to be in the country where he tried to save souls, now shooting at the same people.

Ironically, this sensitive man who believes in higher principles, also grew up hunting with his father in Arizona where he developed the skill that would turn him into a sharpshooter.  He is haunted by a deadly mistake he made just days earlier and in his torment hidden in a blasted home on their journey, he reads the scriptures which he keeps close in his pocket. 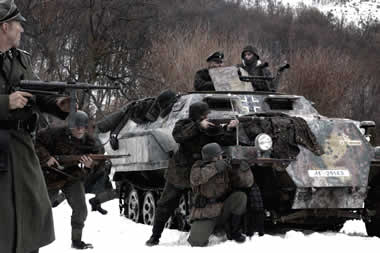 If the sharpshooter is spiritual, Gould, the Red Cross worker, on the other hand, is a cynical healer who looks into the eyes of men, pleading for God as they die, and sees nothing. He is suspicious of Deacon’s earlier experience in Germany, thinking him soft on the “Krauts.”

Geoff Panos, who wrote the screenplay with Matt Whitaker, said, “War films tend to be clichs. For this script, we tried to skew everything so that you didn’t see the good, healing medic and the not-so-good killer who is eventually redeemed. Instead, we tipped it upside down. We knew that in making the film, with the budget that we had, we couldn’t compete with the overall magnitude of a film like Saving Private Ryan, but we can compete with the way the audience responds to the characters.”

Though Panos acknowledges that he is not particularly religious himself, this is a film with lots of religious allegory and major themes of grace and redemption played against a background of courage and grit.

He said, “Every day on the set we did some deep soul searching.  We all took it very seriously. Every time we see the movie, we see more meaning in it than we saw before, things we didn’t even know we had put in.”

Panos, who is an expert in military history said, “Somewhere in the late ’80’s, we began to take a new pride in redefining our nation and looked back again at World War II.  It changed everything-geopolitics, history, science and culture.  It  and the Civil War were the defining events of our nation.

Before World War II, flying over the Atlantic was a rare event.  After we had trans-Atlantic flights, nuclear power, television, a powerful army, and a nation that looked beyond itself instead being isolationist.  Everything changed.  You look at the war again and again and its impact is staggering.  My goodness, they conquered the known world-or they could have-and then they gave it back.  What does that say about the American virtue and character?” 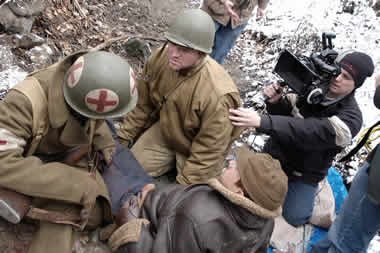 The script was not based on a particular true story, but vignettes and pieces of stories, many of them taken from a recent oral history project where LDS soldiers were interviewed on their experiences in World War II published as the book Saints at War.

“We all get emotional when we talk about making this movie,” said Corbin Allred who played Deacon. We all knew someone who was there.  The picture that my character carries in his scriptures was the same photograph my own grandfather carried when he went to war.”

Though the action of the film takes place in Belgium, the film was actually shot at Sundance in Utah, mostly with a hand-held camera.  It was bitterly cold during some of the thirty days of shooting, and the actors all but froze during 8 hours under the floorboards of a barn where a scene was shot where they hid from the Germans.

To create some of the fighting, war re-enactors from all over the country flew in at their own expense.  These are people who have made re-enacting battles from World War II a hobby-much like the Civil War re-enactors do.  They come with costumes representing both sides and other gear. 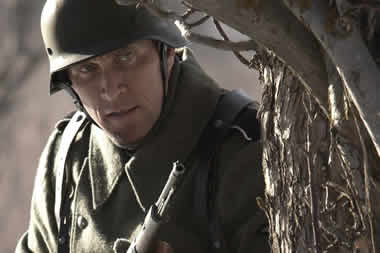 Allred said, “It is great fun to be around these re-enactors.  They made it seem so real.  For a few moments, the fog drifted in and it seemed that 50 years had been erased.  One man who came is building a Panzer tank from scratch.”

Saints and Soldiers will open August 6 in Utah and other regions across the United States, but has received considerable press already because of a surprising twist.  Director, Ryan Little and his team analyzed other war movies like Pearl Harbor to be certain that they could produce a movie that would receive a PG-13 rather than an R rating from the MPAA board.  They wanted to make a movie that had the realistic, gritty feeling of war without going into the R no-man’s land that would be the kiss of death for Latter-day Saint audiences and others.

The board is much quicker to slap a movie with an R rating for violence than for the most outrageous sexual immorality and indecency.  To their dismay, the MPAA stamped Saints and Soldiers with an R rating.  The producers were confused and dismayed, asking for some explanation since so many movies rated PG-13 were much more violent.

Corbin Allred said the MPAA’s explanation demonstrates its limitations as a guideline.  They said essentially, that if you are too attached to the characters who experience violence, then a film deserves an R rating.  All the bombed and bloodied bodies floating in the harbor in Pearl Harbor had no emotional attachment for the viewers.  That made the violence acceptable for a PG-13 audience. 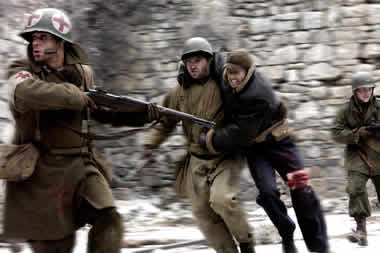 I found the movie intelligent and moving;  its plunging us into the stinging, violent Belgian winter a crucible of experience.  Yet, mostly what will remain with me for a long time is a character who took God seriously in a world turned upside down.  Unlike the paper doll cut outs that are too often the subject of today’s cinema, here is someone that represents the religious rest of us in a world where it is sometimes hard to pick out what is right and true.