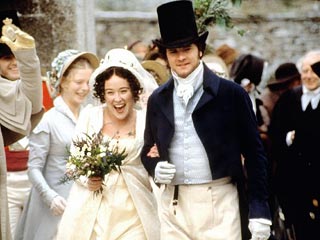 In the final scene of A&E’s Pride and Prejudice the camera pans a double wedding tableau: Elizabeth and Darcy and Jane and Bingley, both couples surrounded by family and community. Misunderstanding, pride, and prejudice complicated these courtships, but honesty, self-evaluation, and chastity accompanied them too. Few viewers doubt they’re watching stable, happy marriages in the making, in contrast to the interspersed scenes of Lydia and Wickham’s London escapade and stark forced wedding-complete with Darcy looming in the background to keep the groom from bolting.

Why don’t more young adults today want the type of wedding they still swoon over on DVD? The one where the vows come before moving in together and bearing children? The National Marriage Project’s recent report “Knot Yet: The Benefits and Costs of Delayed Marriage in America” examines the alarming tendency to delay marriage among our country’s twentysomethings, who “have now helped to push the baby carriage well in front of marriage for young women in the United States.”

Researchers Kay Hymowitz, W. Bradford Wilcox, Kelleen Kaye, and Jason S. Carroll offer two reasons for this delay. Economically, young adults are taking more time to finish their educations and find stable jobs, and culturally, they now view marriage as a capstone rather than a cornerstone: “something they do after they have all their other ducks in a row, rather than a foundation for launching into adulthood and parenthood.”

The “Knot Yet” authors point out that the costs of delayed marriage loom large, especially for the children of unmarried women, who now comprise 48 percent of first births and who are much more likely to experience family instability, school failure, and emotional problems than those born within a marital union. The couples themselves forgo the undeniable gifts of a stable, long-term marriage. Men and women with “good enough” marriages-not marred by abuse, but not necessarily ideal either-enjoy increased economic stability, greater emotional and psychological well-being, and physical health advantages such as greater longevity and quicker recovery from illness.

Even academic skeptics, in the face of decades’ worth of longitudinal, cross-national studies including data from economists, medical scientists, and sociologists, admit that the evidence is real and quantifiable. Interestingly, cohabitation and other options that approximate marriage not only fall far short of the benefits, but prove detrimental to these aspects of well-being.

One expert in the field, Scott M. Stanley, gets to the heart of why young adults eschew the blessings of marriage for the disadvantages of cohabitation: They’re oblivious to the meaning and power of commitment. They want to keep all options open, all desirable partners attainable, and ignore the reality, in Stanley’s words, that “commitment involves making the choice to give up some choices”-hence the marriage vow to “forsake all others.”

Stanley illustrates his concepts of commitment with pragmatic analogies that strangely hit the mark. Just because you buy a Toyota doesn’t mean that Honda goes out of business and you won’t notice any Accords on the road. But you still have to choose one car, and once you’ve made the purchase, you’ll be a lot happier exercising commitment and polishing, maintaining, and appreciating your Toyota than yearning for other cars whose engine and transmission problems you’re unaware of.

His yard analogy goes even further. The “fences” of marriage allow barriers between spouses to come down and foster an intimacy unavailable in any less committed relationship, creating a place of safety in which couples, like Adam and Eve, can be naked both emotionally and physically and “not ashamed.” Choosing not to dwell on greener grass means moving farther away from the fence. Taking good care of your own lawn requires commitment, dependency, and responsibility-all of which contribute to a relationship so beneficial that social scientists find even deep friendships and close-knit social circles can’t match it.

Unfortunately, according to Stanley, “These days too many people want all the most enjoyable parts of relationships without any of the hassles.'” I recently heard from a young couple who spent several agonizing months trying to decide if they should take what seemed like the ultimate leap of faith and get married. They had dated for over a year, all the while forgoing the immensely popular option of sleeping together, and were consequently able to take an admirably clear-eyed look at their relationship and its pros and cons. (According to another marriage expert, John Van Epp, author of How to Avoid Falling in Love with a Jerk, sex without commitment clouds vision in a relationship psychologically and even physiologically and increases your chances of marrying a jerk-but more on this in a future column.)

I still remember talking with these friends about their fears of commitment, of closing off other roads, of accepting the faults and weaknesses they’d discovered in each other through what Stanley calls “low cost” relationship building-talking, playing sports, doing chores, taking classes together-as opposed to the “high cost” relationship formation of premarital sex. The young woman, in particular, approached the whole prospect so analytically that I was almost surprised when they got engaged, set a date, and, within a month, exchanged wedding vows in a simple yet sublimely beautiful ceremony.

As someone who encouraged them to finally “go for it,” I obviously hoped their marriage (despite the inevitable early adjustments and sacrifices) would realize some of those research benefits early on and not become an exception to the generalities. Sure enough, less than a year later, I’m hearing reports of a “wonderful sense of stability.”

Just as the studies predicted, marriage has lowered anxiety and lifted depression, given their psyches and even careers a boost, and increased their financial stability. Thankfully this couple realizes that crises, along with garden-variety daily grievances, will coexist with the benefits. And roads not taken, just like the cars not opted for, will continue to exist and, perhaps, at times, create a sense of loss.

However, even cosmopolitan Edith Wharton, whose novels’ marriages smack of confinement, acknowledged the sanctuary that limitations create. “Under the dullness there are things so fine and sensitive and delicate that even those I most cared for in my other life look cheap in comparison,” world-weary Madame Olenska tells her married suitor in The Age of Innocence when he asks her to run away with him. He replies that he wants to escape to a country where “we are simply two human beings who love each other,” but Olenska rejoins that “I know so many who’ve tried to find [that country]; and, believe me, they all got out by mistake at wayside stations.”

Whether or not they realize it, today’s twentysomethings are entering wayside stations that, as the “Knot Yet” report makes clear, lessen their chances of ever entering the promised land of stable marriage. The marriage passport fee seems too expensive, and they can’t give up other choices. So instead they opt for locations that, according to Wharton and implied by Austen, are “smaller and dingier and more promiscuous.” It seems by not choosing to give up some things, it’s possible to give up everything.

Betsy VanDenBerghe is a writer specializing in family and religious issues and lives in Salt Lake City. She can be reached at [email protected].

Reprinted with permission from First Things: <a href="https://www.

John Van Epp, How to Avoid Falling in Love with a Jerk. New York: McGraw Hill, 2007.

Same-sex marriage is an oxymoron.