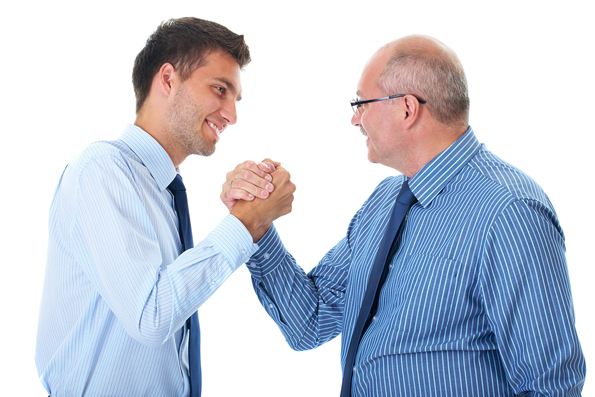 I recently had a booth at a giant Bridal Expo, handing out a page of marriage tips and hoping to promote my new call-in-for-advice radio show. It was great fun to meet so many happy, engaged couples (and to see the panic in the eyes of the dads who sometimes tagged along, and were just now getting a glimpse of the ka-ching! ahead of them). But the most interesting part was the mandatory training a few days before the big show. The people running the event had trade show etiquette down to a science, and offered dozens of tips on how to sell, no matter what kind of vendor you are.

One of the most important aspects of greeting a potential customer was the handshake. And this applies to more than just trade shows. We’ve all heard that a firm handshake is important, right? Whether rightly or wrongly, people have used it to judge others for centuries. And the handshake should convey as much as our smile does.

My husband is known for teaching this to young men in every ward we’ve lived in. He takes wobbly-armed deacons and shakes their hand so vigorously their whole body shakes, which makes them laugh, which makes their handshake even weaker. But he gets them thinking about it. And by the time they’re Priests, every kid knows to look you in the eye and offer a strong, confident handshake. It makes an impression, one that carries you through life. As a missionary, and as an employee, you want to express friendly self-assurance, not timid reluctance. Bob trains the girls, as well.

I recently coordinated the luncheon for a Zone Conference of 80 missionaries, and afterwards they sang to us, then filed by and shook our hands. I had the opportunity to see, firsthand, what 80 different missionaries thought about themselves. And it was very revealing. Some had clammy, nervous hands, some had almost no grip at all, and one nearly crushed my bones trying to show his strength, an unnecessary overkill that backfires when you want to make a good first impression. But most of them had been well trained, and came across as poised and appreciative.

Think how often you shake hands-when visitors come to church, when you Home Teach or Visit Teach, greeting others at social gatherings, meeting a stranger anywhere at all. What does your handshake say about you?

At the trade show training seminar, we were taught the Parson’s Grip, when you use both hands to enclose your friend’s hand. It’s often used to express sympathy at funerals, but politicians like it as well, in hopes of coming across as sincerely caring. Unfortunately, it often feels overly familiar, intrusive, and too quickly intimate. Unless you know the person-in which case it conveys warmth-a one-handed handshake is plenty. Likewise, clasping their arm with your other hand shows insincerity (unless you already know them), and makes people suspect your motives.

What about folks who shake only the fingertips? This can reveal insecurity, or the desire to keep others at a distance. Pulling the other person in shows a need to control. The “limp fish” handshake is probably the worst, and conveys an utter lack of self-esteem.

When someone is offended, it’s good to roll a handshake over to let that person’s hand rest on top; it gives them the power, and subconsciously apologizes for an offense. When you let their hand rest on top, you are being humble and giving them dominance.

A good handshake lasts just two or three seconds (and this varies depending on cultures). Any longer than that and you come across as needy or controlling.

But the best handshake of all is one that’s firm without clenching, keeps both parties’ hands vertical and thus equal, and is accompanied by eye contact and a welcoming smile. With a little practice (at Family Home Evening, perhaps?) even young kids can develop the habit of a good, healthy handshake that shows respect and puts others at ease. They’ll soon do it automatically, win points with teachers and leaders, and find it conveys the kind of confidence that opens doors for the rest of their lives.

And her latest three novels, “JUNGLE,” “SISTERS IN THE MIX,” and “PINHOLES INTO HEAVEN” are all available in paperback at Createspace.com, and on Kindle at www.mormonbooksandauthors.com.

Hilton has written 20 books, three award-winning plays, and is a frequent public speaker and a former TV talk show host. She is also the author of the “As the Ward Turns” series, “The Ten-Cow Wives’ Club,” and “The Power of Prayer.” Hilton is a frequent writer for “Music & The Spoken Word,” many national magazines. She is married to TV personality Bob Hilton, is the mother of four, and currently serves as Relief Society President in her ward in northern California. She can be reached at her website, jonihilton.com, Twitter:@JoniHilton, and Facebook: Joni Hilton.

I got a chuckle out of this story. My son is EQP in his ward and shakes many hands. Some people don't have the hard 'Missionary grip" because they are either non-members, or other reasons. His uncle met the missionaries at our house. When I told my son, he replied, Oh did Uncle Gary give his usual "fish " handshake? (That's when you shake hands and yours goes limp like a dead fish). I laughed as I knew my brother-in-law ALWAYS shook hands like a "fish" but thought nothing of it. He's still a non-member, but who knows, he may just increase his grip as his testimony grows.

I always teach the young men in our ward that the objective is to squeeze just hard enough let the other person know you're there, but not hard enough to hurt anyone. Nothing worse than a limp fish handshake.