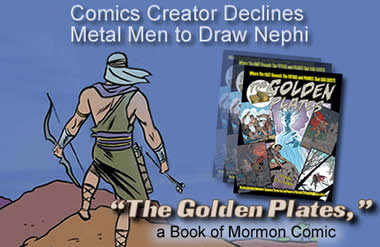 The past few years have been very good for comic book creator Michael Allred. With a sense of fun, innocence and flat-out oddity, his character Madman became popular enough to warrant a crossover team-up with Superman, and to be optioned for film by Spy Kids director Robert Rodriguez. Influenced by his friendships with Rodriguez and filmmaker Kevin Smith, Allred even wrote and directed his own independent film, Astroesque. Recently, Allred’s work became even more mainstream when Marvel Comics tapped him to draw a spin-off of the X-Men, called X-Statix, that focused on superheroes first exploiting their fame and then learning that they had a higher responsibility.

After X-Statix ended, Allred was due to jump over to DC Comics and help revive the light-hearted feature Metal Men, about robots that yearn to be human while fighting evil. Comic book fans were eager. His profile had never been higher in the industry. And then Allred did something that shocked everyone.

He put all of that mainstream work on hold to answer a higher responsibility. One weekend in July, Allred announced on his website that he would not be pursuing work from Marvel or DC for the near future. Instead, he would be following a still small voice and adapt the Book of Mormon into comic book form, under the title The Golden Plates. 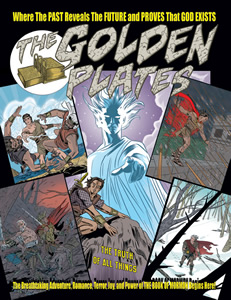 Though in hindsight some critics now claim they’d noticed an LDS influence, it had not been common knowledge that Allred was a member of the Church of Jesus Christ of Latter-day Saints. If it is not common knowledge now, it soon will be. At the end of October, he will release the first issue of The Golden Plates through his own publishing imprint, AAAPop Comics (www.aaapop.com).

Allred kindly agreed to answer a few questions for Meridian Magazine about his goals for the project, the Book of Mormon’s influence on his life, and the impact he hopes to make.

Meridian:  Your career may have never been hotter. So why now drop it all for The Golden Plates?

Allred:  Simply put, I was inspired. I will often listen to scriptures on CD when driving, and while listening to the Book of Mormon I could see how I could draw it, particularly images and moments that were previously beyond my understanding. It just kind of opened up to me.

Meridian:  What kind of reaction have you received from within the comics community?

Allred:  Mixed. Many people question my sanity. Many are excited to know exactly what this is and why I would make a 180 from commercial success to something “religious.”

Meridian:  Do you think that mainstream comics, specifically the superhero genre, are already making a moral statement?

Allred:  I don’t think that. I think there’s a perception of losing the “cool” factor as soon as religion is brought into the conversation. And so a deeper moral statement beyond “good versus evil” is rarely made.

We, the comic book biz, tend to think that pushing the envelope towards edgier and edgier material is being progressive. I’ve certainly been guilty of that, and the results have been a numbing cynicism. I want to be able to feel deeply and that requires an open heart. I feel like I’ve taken off my body armor and vulnerable to attack, but that’s a risk I’m now willing to take.

Meridian:  Is your goal missionary in nature, or does entertainment come first?

Allred:  My goal is clarity. I know that the Book of Mormon is the key to the universe. It opens the heart and mind to the truth of all things. But it takes a lot of intense focus and commitment to completely understand it and how it consistently supports, sustains and clarifies the Old and New Testaments.

I’m a visual person and learn best visually. So, the paintings of Arnold Friberg helped bring the Book of Mormon to life for me. And the Book of Mormon Reader and Book of Mormon Stories have been very helpful tools in understanding the events as well. But there is so much missing or skipped over. And the flashbacks and overlaps aren’t made simple like they could be. So, I’d always hoped there would be similar but far more inclusive projects. It just never occurred to me that I might do it myself someday.

The short answer to your question is that the Book of Mormon in and of itself is thrilling beyond anything I’ve ever read, so the entertainment takes care of itself.  That being the case, a clear visual missionary tool is my goal. It’d be great if even just one person turned to the full force of the scriptures because of this project giving a little push.

Meridian:  What inspires you to keep going on this project?

Allred:  It’s thrilling to bring the chapters to life. Drawing that last page is pulling me like a magnet.

Meridian:  What roadblocks have you faced in working on this project?

Allred:  Time and money. It’s a financial risk, especially when the DC and Marvel money evaporate. But we’re not worried.

Meridian:  Which elements of this project have given you the most satisfaction so far?

Allred:  The response has been very encouraging, but from the work itself, Nephi’s vision has been especially powerful to draw and see Laura’s (Allred’s wife and professional comics colorist) colors bring it to life.

Allred:  The work speaks for itself on both counts. Anyone interested in stories about human beings rising to their highest and most heroic potential will find that here and the care and intent will hopefully satisfy the faithful.

Meridian:  You described this as a great adventure story. With the Book of Mormon telling so many narratives, what have you done to give it a cohesive through line?

Allred:  Telling it straight with visual cues that make everything as clear as we’re able to make it.

Meridian:  How available is this going to be? You are distributing through your own company, AAAPop (www.aaapop.com), so comics shops are covered . but what about places like the Deseret Bookstore?

Allred:  We’re setting that up right now so that any store or individual will be able to purchase directly from our company including bulk rate discounts. All that information should be up on AAAPop (www.aaapop.com) by the end of October.

Meridian:  Were you born in the Church, or were you a convert, and in either case, how has that affected your faith?

Allred:  I was born in the Church, but very much consider myself a convert. As President Kimball once asserted, everyone must discover the scriptures for themselves. And I have. I looked everywhere for truth throughout my life. I couldn’t accept on face value that the Church was true just because my mom said it was.

The beauty of the gospel is that when you finally turn to it and its truths, the more you learn and the more certain it is. It’s a blessing that we’re encouraged to study and pray for our own revelations. No one should build a testimony of truth on someone else’s say-so. We learn by example and inspiration and will have a powerful testimony of our own by simply reading and praying with an open heart. Moroni’s promise is real.

Meridian:  How has being LDS influenced your earlier work?

Allred:  Because I was a member of the Church, I was always keeping certain standards. There were lines I was never willing to cross. But in retrospect, looking over some of my work, I think my standards could have been a lot higher.

Meridian:  What have you done when faced with projects that might have conflicted with your beliefs?

Allred:  I passed on them. And I have. But honestly, there were some I probably should have but didn’t, including work of my own. We live and learn.

Meridian:  Once you’ve finished The Golden Plates, how do you think this will affect your artistic future? For example, how close an eye are you going to keep on the film adaptation of Madman? 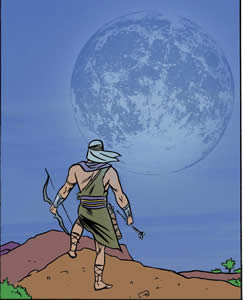 Allred:  I originally had planned on doing A Man Named Smith, a graphic novel on the life of Joseph Smith, before I was moved to The Golden Plates, so I still want to finish that, as well as a chronological account of Christ. Imagine a visual counterpart to James E. Talmage’s Jesus The Christ.

I jump in on the Madman movie whenever I’m asked, but Robert Rodriguez still has other distractions to attend to before Madman rises to the top of his “to do” list. The success of Spy Kids put him on an arcing detour, but he thinks we might be shooting this time next year.

Meridian:  Any words of inspiration to those trying to put their faith in their artistic life?