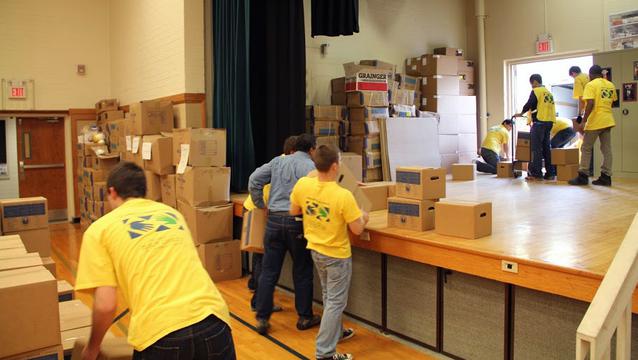 To date more than 28,000 MHH volunteers have given of their time, totaling over 275,000 hours, to the recovery efforts and in assistance to victims of Hurricane Sandy in New York and New Jersey.

Thousands of boxes of food were given to the Red Cross, and the Church donated $50,000 to the American Red Cross of Greater New York. In addition, nine semi-trucks full of cleaning supplies, including shovels, generators and water pumps, were sent to a central support center in Emerson, New Jersey, and 10 truckloads of blanket and clothing donations have been distributed throughout the region.

During the six-week-long cleanup effort, volunteers traveled from as far as Canada, New Hampshire and Virginia. Thousands of volunteers from neighboring states even spent the night in local Mormon church buildings over the Thanksgiving weekend in order to spend more time assisting with recovery efforts.

Elder Donald L. Hallstrom of the Presidency of the Seventy visited in December the affected regions in New York and New Jersey to meet with residents and thank the volunteers.

Latter-day Saint missionaries brought the Christmas spirit to hard-hit communities with a series of musical firesides in New Jersey, Staten Island and the Rockaways.

Additional MHH work will continue to be provided throughout the impacted areas.