THE UNLIKELY GIFT OF TREASURE BLUME by Lisa Rumsey Harris 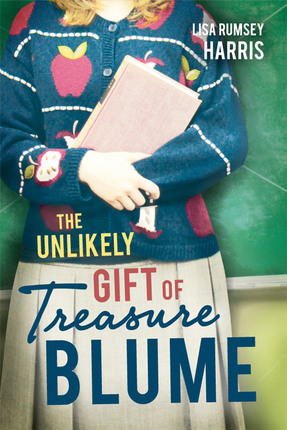 There are some people who just rub a person the wrong way. Treasure Blume is one of those people. Her grandmother assures her it’s a gift, but it feels more like a curse to Treasure. The Unlikely Gift of Treasure Blume by Lisa Rumsey Harris is the story of a young woman who for some mysterious reason people see and they automatically intensely dislike her before she has a chance to even say hello. There are exceptions. Old people and small children seem to be immune.

Treasure and her “grammy” share this gift and are close and supportive of each other. Grammy belongs to a senior ladies dance group called Ruby’s Red Hot Chili Steppers. Treasure acts as a support person for the group and is loved by the elderly women. Growing tired of her family’s protectiveness and spending all of her time with the elderly Steppers, she accepts a teaching position in Las Vegas. She was only offered the job because the interview wasn’t in person and the school district was desperate.

Treasure loves having her own apartment and her first grade class in spite of the negative remarks and treatment she gets from the school secretary and most of the other teachers. She gets off to a bad start with the father of one of her students, a divorced chef who takes a job as a “lunch lady” at his daughter’s school to be near her. As his daughter makes it impossible for the two to avoid each other Dennis’ attitude begins to change.

Another change happens when Grammy gets evicted from her retirement center home because of her aggressive fighting with another elderly lady. The only solution seems to be for Grammy to move in with Treasure which brings an array of problems, but numerous opportunities to support each other. For Grammy to continue to dance with the Steppers, Treasure winds up chauffeuring her from Las Vegas to St. George for practices and performances. Since she’s there anyway Treasure goes back to serving as the group’s manager, leaving her little time to pursue romance.

Treasure is so astonished and awkward at finally having a boyfriend, but she is vulnerable too and when Dennis avoids introducing her to his mother and friends, she suspects he is ashamed of her. That hurts a lot.

Treasure not only leaves a terrible first impression, but she has a knack for saying and doing the worst possible things. Some of her gaffes, though embarrassing for her are delightfully funny. No one has ever had such a severe problem with foot-in-mouth as poor Treasure.

The Unlikely Gift of Treasure Blume is great humor, some obvious and other points more subtle, but under all of the funny lines and situations there are some serious messages concerning first impressions, judging others, loyalty, true heroism, and the marvelous ability some people have of turning difficult matters into positive ones. It’s a good example of being true to those you love and to yourself. Though there are a couple of low key romances in this book and they along with Treasure’s personal goals provide an interesting plot line, the strength of the story is in the characters and their personal growth. The emphasis on character development, the almost hidden messages, the clever use of words, all tend to give this novel an almost literary quality except I’ve never before found a literary novel quite so funny.

Originally from Southeastern Idaho, Lisa Rumsey Harris now lives in Orem, Utah and teaches English at Brigham Young University. She lives with her husband and two daughters. She has won honors for short stories and essays, but this is her first novel.