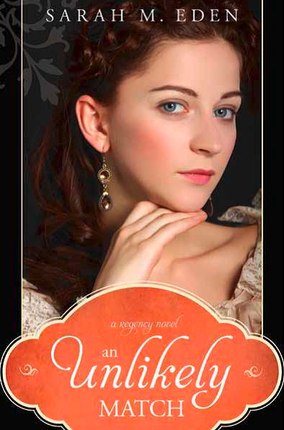 For those shopping for a reader on your list who would like something different, may I suggest Unlikely Match by Sarah M. Eden. Eden is known for her exceptionally fine Regency Romances and technically Unlikely Match is a Regency, but it’s also a most unusual ghost story. History buffs might count it as historical since it is a well-researched novel that takes place in Wales during the early nineteenth century. Anyone intrigued by Welsh customs and language will also find this novel a rewarding read. Sian Bessey, a highly respected LDS novelist, who was born and raised in Wales, assisted Eden with Welsh terminology and customs to give the story the authentic feel Eden desired.

Nicholas Pritchard is orphaned young and barely manages to scrape through school. Anytime not at school he was farmed out to various relatives for varying lengths of time. He has no money, no estate, and is looked on with suspicion if he pays attention to any of the young ladies making their come out. Then a miracle occurs and he finds himself heir to an estate in Wales along with a comfortable living. He immediately adores the house, the estate, the staff, but there is one slight drawback. The house comes with a ghost, a very particular, choosy, take charge young lady who has been brow beating the estate’s masters into doing things her way for 400 years. Unfortunately Nicholas doesn’t believe in ghosts.

Nicholas befriends the local vicar and one day a discussion leads to a bet with the loser to spend a night in the house’s old castle tower. Of course the bet concerns whether or not the ghost is real.

One of Nicholas’s first acts is to host a house party. He invites an old friend from school whose family was always kind to him along with the young man’s parents and sister. He also invites a young lady whom he fancies would make a perfect wife and, of course, the invitation includes her parents. The vicar is invited to dine with them each night of the party and remain for entertainment afterward. The numbers are uneven, but the party is lively. It gets livelier when Gwen, the ghost shows up.

Though Nicholas and Gwen vie over just who is in charge, when Nicholas spends a night in the tower, he begins to learn something of the ghost and her unhappy situation. As feelings for each other begin to grow, they face a terrible quandary. A real relationship between a twenty-five year-old man and a four hundred year-old ghost just isn’t going to work. They can’t even touch each other. How can he give up his dream of a family of his own for her? How can she see him every day in the arms of another woman, watch him grow old, then die, leaving her to continue haunting the old castle alone? What is the terrible secret that keeps her frightened and tied to the estate; why can’t she move on as others do after death?

Eden’s style is remarkably readable. Though she’s a fan of Jane Austen, her voice is distinctly her own and a great deal more fun. She’s adept at creating both humor and pathos. Her characters feel real and show a great deal of growth as the story progresses. Though this book is not literally an LDS novel, it shares the standards and philosophies of members of the Church. The plot is well-executed. It builds in a satisfying manner with a nice balance of humorous situations, serious moments, a touch of mystery, and a charming romance. She handles the gripping denouement in a way that is both sensitive and realistic.

Sarah M. Eden has been a Regency fan almost since childhood and was a Whitney Award Finalist for Seeking Persephone in 2008. She’s a Northern Utah transplant from sunny Arizona.