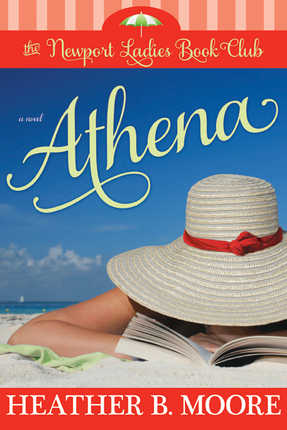 Heather B. Moore departs from her Book of Mormon based novels and more doctrinal works to pen the fourth volume of the Newport Ladies Book Club, Athena. This series has proved popular with fans of “slice of life” women’s fiction. The same story is told four times in four different volumes, each by a different author and from a different point of view.

Athena appears as a very put together woman, one who owns her own business, dresses well, drives a nice car, owns a great condo, and always appears in public poised and well-groomed. Beneath her perfect exterior, she’s a basket case, afraid to commit to a relationship with a man, so micro-managing she’s reluctant to hire help to deal with her tremendous work load, and unable to put a stop to her family’s matchmaking. She’s afraid of not looking or acting perfect and in control at all times. Her mother wants her married to a nice Greek man, but Athena wants nothing like her parents’ marriage where she perceives her mother as a woman totally dominated by her husband with no life or dreams of her own. And now that Athena’s father has Alzheimer’s her mother has even less of a life.

The man she’s currently dating only arrives in town once a month. They go out to dinner, enjoy each other’s company, and end the evening with a light kiss. It’s bad news when she learns he’s going to be around more and wants to see more of her. When she refuses to take their relationship to the next level, the man she considered the perfect boyfriend leaves her with a taunt about her inability to be spontaneous. Determined to prove him wrong, she drops in on a used book store where she is given a flyer concerning a book club. She’s intrigued by the idea of joining a book club, but it’s the store owner she can’t quite get out of her mind.

Though she’s nervous and scared, she attends the club’s first meeting and thinks she has nothing in common with the other women, yet a conversation with one woman leaves a lasting impression. One of the strong points of this novel is the introduction of the stages of the Alzheimer mental deterioration suffered by Athena’s father and the impact it has on her. Also this book is the only one in the series that has a solid romantic sub plot and a conclusive ending.

The first book in this series, Olivia by Julie Wright, showed the impact the various books the club read had on Olivia’s life. The second through fourth have dwelt more on the importance and value of the friendships formed by the women. There isn’t much of a plot that develops through the series, leaving each book, especially the first and fourth, possible stand alone books with satisfying endings. All four of these authors, Julie Wright, Josi Kilpack, Annette Lyon, and Heather Moore are outstanding writers and this has been an interesting experiment they’ve played out with this series, but on a personal note, I hope they go back to writing the kind of books they’ve written before. I don’t like knowing what is going to happen in a story before I get to it even if it is told from a different viewpoint. Readers who enjoy a strong plot oriented story will probably feel the same, whereas readers who enjoy slice-of-life with strong character development will likely hope for more of this series from this talented quartet.

Heather Moore is a two-time Best of State and Whitney Award winner. She has nine other novels and two non-fiction books to her credit. She is also a freelance editor. She and her husband live in Utah with their four children.