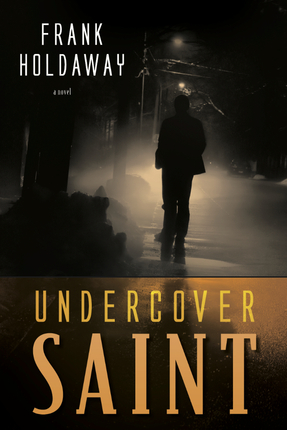 Matthew Knight isn’t the usual undercover agent and his assignment isn’t exactly typical. He’s a guy with a few psychological monsters of his own, a smart mouth, and he’s in love with his best friend’s wife. He’s being sent to live in an apartment complex in the heart of an LDS singles ward and he’s not even sure if he’s a Mormon or not.

Frank Holdaway’s different hero tells the story in first person, which usually doesn’t work too well in mystery/suspense novels, but in Undercover Saint it works very well. He’s quite adamant that he doesn’t want to accept an assignment that takes him back to Salt Lake City, a place where he lived for a short time as an eight-year-old kid, the place where his mother was murdered and he’d run from the murderer in terror. He’d looked the murderer in the face, but had blocked the face from his memory and been unable to tell the police anything.

To make matters worse, his handler is his bishop, a huge black man who had been one of his instructors when he was training to be an agent and someone Matthew isn’t too fond of. He tries to explain that he’ll stand out like a sore thumb in an LDS community because he and his mother had only been baptized a few weeks before she was killed and he was sent to live with relatives who wanted nothing to do with the Church. He has no idea what Mormons even believe.

When he can’t wiggle out of the assignment, he meets his new roommates who also happen to be the number one suspects in a case involving a threat to poison a water supply. The roommates are skinny, distracted Roger, a science major, who wants nothing to do with women and who has invented a compound that makes it possible for fresh water fish to live in salt water. The other roommate is Joseph, a dark Mediterranean, whose only interests seems to be running and avoiding people. He’s also the son of a man Matt has idolized for years.

Matt develops a plan to get to know all of the people in his apartment building. They all happen to belong to his ward as well. There’s a loudmouth bully who works at Dugway, an angel so beautiful she has all of the young men trying to score a date with her, an insecure young woman who dresses in drab clothing and hides behind over-sized glasses, a seventy-five-year-old woman who dresses like a teenager and asks him out on a date, and dozens of returned or would-be missionaries.

The characters are a parody of people found in any ward, yet strikingly individual. There are some outrageously funny inner thoughts and dialog, yet the book is not a comedy. The hero is both obnoxious and loveable. The mystery is very real and the suspense keeps the reader turning pages and sitting on the edge of his seat. There are quite a few LDS doctrinal references, but the book never feels preachy. It contains a lot of inner soul searching and Matthew has to face his inner monsters and take a good look at who he is and what his future holds. This is a hard book to describe. It’s different. It’s riveting. It’s funny. It’s serious. And I liked it.

Frank Holdaway describes himself as a fan of action thrillers. He travels a lot and depends on gripping novels to help him get from one place to his next destination. He lives with his wife and two kids near the mountains in Pleasant Grove, Utah.