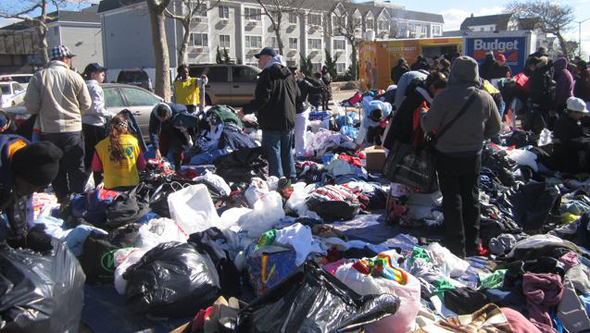 Members and missionaries from The Church of Jesus Christ of Latter-day Saints  along the East Coast are organizing projects to help those affected by Hurricane Sandy. Church members in areas hit by the storm have worked to help neighbors with immediate needs, including clearing trees and debris. In areas less affected by the storm, members organized clothing and supply drives in their communities.

Missionaries and Church members in New York have been out in force since the storm subsided, providing assistance in all five New York City boroughs and beyond. In the first five days following the storm, more than 3,800 volunteers worked over 37,500 hours.

On Long Island, Church members have been organizing crews to look for neighborhood homes with fallen trees and help to clear them out. They have also delivered fliers to neighbors. “We want them to know we are willing and able to help,” said Mark Hardman, a local leader in the area.

On Saturday and Sunday, 200 missionaries and 300 Church members worked to clear debris from some of the thousands of flooded homes in the five boroughs. New York New York South Mission President Kevin Calderwood said debris was stacked 10 feet high on some streets, and missionaries helped sanitation workers load trucks where they could.

Rockaway, an area home to many first responders, was particularly hard-hit. About 450 volunteers worked to clear debris in that area, and they plan to focus future efforts on 105 homes of first responders.

President Calderwood said it was especially difficult to see first responders and their families so deeply affected by the storm. He asked one firefighter what damage his home had, and the man was too choked up to reply. He told the firefighter, “We’ll take care of it.”

This weekend, 1,000 missionaries and members will continue work in Rockaway and Long Beach to muck out basements full of dirt and debris, remove water-damaged sheetrock, and spray bleach to prevent mold. Church volunteers will be bused in from Boston, Washington, D.C. and Pennsylvania to help.

Church volunteers have been working closely with the American Red Cross to assist in shelters. “The Red Cross calls us pretty readily; we’re at their beck and call, whenever we can help,” Hardman said. Members have been helping with both the set-up and running of shelters, as well as contributing supplies when needed.

In Brooklyn, members have gathered 500 cleanup kits for residents to use once larger projects are completed. The kits consist of bleach, garbage bags, goggles, brushes and other similar items.

Missionaries, Church members and Catholic Charities volunteers in the area worked to get a Catholic church in Red Hook back up and running this past weekend. Local leader Jeff Nelson was amazed to see how quickly the Red Hook church became a community outreach center for the area once again. “The place was just hopping,” Nelson said. “It became a center to provide for the needs of that area. Our work with Catholic Charities has an exponential effect.”

Hundreds of Church members will head to Staten Island, Coney Island and Red Hook to continue cleanup efforts this weekend. Local leader David Glick said that so far, members and missionaries had cleaned up more than 60 homes on Staten Island.

The Church also provided six trucks of winter clothing from drives conducted over the past weekend to residents in the area. Items were distributed to 500 children near a local elementary school that was so damaged by the storm it will likely be demolished.

Hardman said neighbors on Long Island have been thankful for the assistance. “Those we’ve helped have been very grateful and amazed that people would be willing to come out and do so much,” he said.

Volunteers wearing yellow Mormon Helping Hands vests and shirts have been dubbed by some community members they have helped as “the Little Yellow Army of Happiness.”

Mission President Calderwood smiled when he heard the nickname, and agreed that Church volunteers do resemble an army of “little yellow ants going from house to house.” He said he wants his missionaries and Church volunteers to help “as many people as we can.”

President Calderwood was deeply gratified by one neighborhood’s reaction to his missionaries: “A group of our missionaries were posing for a picture after working, and I looked down the street and saw neighbors standing, cheering and clapping for what the missionaries had done for them-so touching.”

Near Paterson, 50 missionaries and 150 Church members have been assisting residents of a local mobile home park that sustained severe damage from the storm. Nearly all of the 270 homes were affected. Local leader Jeff Mathusek said the yellow shirts and vests worn by Mormon volunteers have become well-known in the area. “They say ‘We want the people in yellow back,'” Mathusek said. “Everybody is very grateful.”

About 200 volunteers from the Paterson and Caldwell areas will partner with a Catholic group this weekend to clean out basements, removing damaged furniture, carpet and other items, as well as do general cleanup in the area.

The Church has been working closely with other organizations to help residents in Bucks County. The American Red Cross coordinated efforts by volunteers from the Church, St. Luke’s Lutheran Church, the Southeast PA chapter of Voluntary Organizations Active in Disaster (VOAD), Palisades School District, Philabundance, the Nockamixon Township, and others to contribute food and thousands of man-hours to help people displaced by the storm.

“It is truly a coordinated effort and one of the best I’ve seen in over a decade of volunteer work with the Red Cross,” said Shelli Dunn, an American Red Cross shelter manager. “I’ve worked many emergencies from Katrina to Irene, and it’s always incredible to see how communities come together to provide for others.”

Last Tuesday after the storm, the shelter provided meals and showers to 311 individuals. That number grew to well over 1,000 per day by Sunday.

“Everyone is so nice,” said Nikki Hann, a shelter resident. “I’ve lived here for 20 years and have never seen so much devastation. At the same time, this shelter has been one of the greatest places I’ve ever been, and even the school kids have been helping since they’ve been out.”

Mormon volunteer Leisha Atkinson helped serve food at the shelter on Sunday and said she was touched by the strength of the community. “I particularly enjoyed hearing everyone’s stories that showed their determination and resilience,” Atkinson said. “Each of us has our own jobs, family situation, political views and opinions, yet when it comes time to pitch in and help, people gladly do so.”

The shelter remains open as long as so many are out of power and water.

On Saturday, missionaries from the Philadelphia Pennsylvania Mission and members from the Church’s Reading, Philadelphia and Valley Forge Stakes spent over 450 hours combined helping neighbors remove trees felled by the storm.

The Church’s Baltimore Maryland Stake collected clothes, coats, shoes and blankets for victims of Sandy in New Jersey and New York. Local leader Craig Halsey asked members to bring items to church on Sunday, 4 November and to enlist neighbors and friends to do the same.

The group collected over 400 boxes of clothing and enlisted 250 volunteers. The winter clothing was delivered to victims the following Tuesday.

Church volunteer April Robinson worked to help sort clothes this weekend. “I’m amazed at the amount that came together in such a short time, and I’m humbled by the feeling of giving service,” she said. “On Friday I was at the temple, and I asked for opportunities to serve. I am grateful that I had this opportunity today.”

One neighborhood resident heard about the drive and decided to add a surprise to the items she donated: She put a $5 bill in the pocket of every winter clothing item.

Church member Tiffany Rueckert, in the Jones Falls area, said her neighbors have been very willing to contribute to relief efforts. “Our family walked around Sunday afternoon with our three small boys and put fliers on the doors of our neighbors,” she said. “Within half an hour of being home, I received an email from a neighbor saying that the Fallston Rec Football League would like to donate all of their leftover water and Powerade from this year’s season. Cases and cases were piled into the back of my van on Monday morning by a young teenage football player and his two younger sisters.”

Rueckert said seeing the generosity around her has been moving. “I have a great testimony of the power and greatness of people,” she said. “People are good.”

Volunteer Trina Neel said the whole community is eager to join in to help hurricane victims. “Once we put the word out, the enthusiasm went everywhere,” Neel said. “People were so happy to help. In church, I could feel the growing momentum. I feel like it’s Christmas Eve and I can’t wait to see what tomorrow brings.”

Ken and Patty Lee, in Oakton, Virginia, arrived to pick up some donations from a friend who had sent out word to her neighbors about the need for coats. They came home with 350 coats.

Jane Auker, who lives in the neighboring town, came by with her van completely stuffed with donations from her neighborhood. Jane grew up on Long Island, New York, and still has family there. Auker was grateful for the chance to contribute to relief efforts. “Finally, something I can do!” she said. “I love your church for doing this, and I’m so happy to have something to do to help.”

Church member Tamara McMurdie organized an effort to collect items in her Manchester neighborhood. “I couldn’t do nothing; I had to do something,” she said. McMurdie, her husband, Neil, and other volunteers collected more than 110 coats, as well as sweaters, hats, gloves and other warm clothes, personal hygiene items and over $3,000 worth of food in their three-hour drive.

McMurdie said she was touched when a woman in a wheelchair arrived with her guide dog to bring a donation. “The rest of the world stopped for me for a moment as they made their way up to contribute,” McMurdie said.

Church volunteers along the East Coast will continue to provide assistance to hurricane victims in the coming weeks and months.