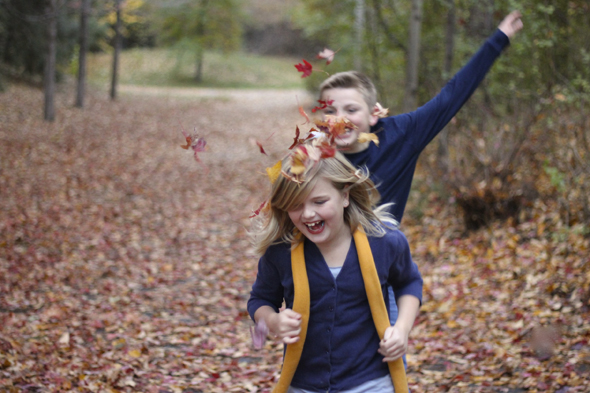 “Okay, everybody smile and say CHEESE!'”

If only it were that simple.

We took our family Christmas card photos over the weekend. Do you know how difficult it is to get five young children to smile all at the same time? Even longer when their own mother is the photographer. Let me tell you, no amount of cheese could do the trick. “CHEESE! Come on! I said CHEESE! Hey you! Stop making that weird face!”

So like any good mother, I tried guilt. “We all love each other don’t we? So cozy up nice and tight–that’s right– and smile! Feel the love! We’re a happy family, right? Right??” I demanded through clenched teeth. “Now say, FAMILY'” Click. No dice. Nothing but two-finger rabbit ears, eyes glancing sideways and bared, ferocious looking teeth. Ugh.

I finally wised up and appealed to their more visceral natures. “Okay! Everybody who smiles nice and normal in this picture gets ice cream! Who wants ice cream? Ya? Now say, COOKIES N CREAM!'” Click. Hmmm, better…

But remember, I still have an 18 months old who doesn’t respond to guilt or the idea of an ice cream cone that’s still 45 minutes away from becoming a reality. She likes gum so we tried that, but I can only airbrush so much blue wad out of her mouth with my photo editing software. So we had to take the gum away which was like watching an addict sober up, day one. Not a pretty picture. Pun intended.

Then suddenly, like the sun briefly peaking out from behind the clouds on an overcast day, she was in a good mood. No tears, no hands in her mouth–she was finally responding to the slapstick comedy and endless games of peek-a-boo being played out behind me! With her in a good mood, and what with ice cream on the horizon for the older kids, I swung into full photographer mode. I knelt down on the carpet of leaves, anxious to zoom in on the action and preserve those cherubic cheeks all rosy and bright, punctuated by twinkling eyes. Click, click, click! Precious. Just precious!

And that’s when I realized I had knelt down directly into doggie doo-doo. New jeans too. Yes, somebody had failed to observe basic public park courtesy and what’s worse, my baby followed suit not 30 seconds later. That’s when the sun went behind the clouds both figuratively and literally.

We were losing light and I still wasn’t sure if we’d captured “it.” And coming back for a reshoot wasn’t an option. Are you kidding? It was like pulling teeth just to wrangle them all into their color coordinated outfits, comb through their snarls and convince them that driving an extra 15 minutes up the road so we could shoot at this beautiful location instead of our boring backyard was well worth it! This was it! It had to be today!

That’s when a leaf fight broke out.

Turns out the phrase “LEAF FIGHT!” is a very effective way of getting children to smile genuine smiles. Much more effective than plain old “CHEESE.”

We all got ice cream. (And the luckily, the doggie mess airbrushed right out.”)