Gallacher and Robinson Deliver Excellence with “A Banner is Unfurled” 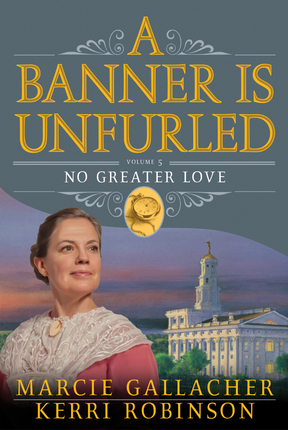 A Banner is Unfurled, an early Church history series by Marcie Gallacher and Kerri Robinson began eight years ago and concludes this fall with Volume 5, No Greater Love. The story follows the conversion and trials of the real Ezekiel Johnson family as their family loyalty and their faith in the newly organized Church of Jesus Christ of Latter-day Saints is tested when some of their large family joins the Church and others do not. It portrays the various expulsions from their homes as they are steadily driven west with the Saints, the construction of the Kirtland Temple, the persecution of the Mormons, and the dreaded diseases that took the lives of even the faithful, including members of the family.

No Greater Love begins in 1838 with Julia and some of her children living apart from Eziekiel who remained behind in Kirtland where he still struggles with alcoholism, but is a stalwart support to Almera who has her own struggles with her abusive husband. Julia and her children, who are nearly all grown now, face their own nightmares of poverty and the hardships brought about by Governor Bogg’s extermination order and the imprisonment of young Ben.

Almon, Julianne’s husband, struggles with pride throughout the book. He has a difficult time following the prophet’s instructions at times when those instructions run contrary to previous decisions or what seems to him to be the most logical and practical means of dealing with a matter. He is hurt at times when given a calling by the prophet, then publically replaced in that calling without notice. He often feels hurt, humiliated, and suffers financial loss which causes him to examine his faith very closely.

The youngest daughter, Esther, is determined to return to her father in Kirtland. She’s strong-willed and determined both on this issue and in her determination to marry at an early age.

This novel takes the story through the martyrdom of the Prophet Joseph Smith, the trials that followed, and the mob violence that led to the Saints crossing the river to build Winter Quarters and begin their trek west.

Because this series has been strung out over such a lengthy period of time, it is difficult at times to keep all of the characters and various story lines straight. I would recommend, if possible, for readers to go back and skim through the earlier volumes before beginning this one. Perhaps because the characters in this series were real people, ancestors of the authors, and in many cases familiar as well to any who have studied the history of The Church of Jesus Christ of Latter-day Saints, it is easy to become emotionally attached to them. Their feelings and reactions are real. The persecutions they suffered hurt even today. And perhaps most importantly, their testimonies still shine through after almost two centuries. In my estimation this is one of the major and best written fictional series dealing with the real events of this tumultuous period of Church history.

Another strong factor stressed in this final volume is the power of love; love within a family, between husband and wife, between parents and children, and also the love members of the Church have for their prophet and the deep abiding love of the Savior for those who follow him at great sacrifice.

Both authors are graduates of Brigham Young University. Marcie Gallacher has published four previous novels. She, her husband, and four children live in California. Kerri Robinson is a psychotherapist. She has published a book in her field. She and her husband live in Utah and have a large blended family. Both authors are descendants of Eziekiel and Julia Johnson who were their third great-grandparents.