What Columbus Discovered 520 Years Ago: Geography Made America Exceptional

A few months ago, visiting family, I flew from Boston on the northeast coast of the U.S. across to the West Coast. Usually there is little to see on such a flight, but on this day the weather across the country was especially clear. For several hours I sat entranced, just watching the changing landscape below. After skirting the Great Lakes seemingly endless lush farmland eventually gave way to grassland. A myriad of smaller lakes and rivers crisscrossed the land before prairies, mountains and finally the green coastal valleys of California. Cities and towns came and went, all insignificant against the immensity of the land.

Although Christopher Columbus never set foot anywhere in North America and was not even the first to cross the oceans and arrive in the Americas, his landing in the Bahamas on October 12, 1492 is generally regarded as the beginning of regular colonization between the Old and New Worlds. Over the next several hundred years the modern republic of the United States of America expanded, achieved independence and thrived. Today, while we may despair at its current challenges and its direction, the USA remains the world’s largest economy.

Within its borders the final restoration of the Gospel began in 1820; a decade later the church was organized. The first Temples were built within its borders and the first missionaries went forth into the rest of the world. With church headquarters now in Utah and the promise of Missouri as the eventual hub of a much larger area to be called Zion, it is clear that the USA has a primary role in God’s purposes. As far back as Old Testament times God’s prophets knew of a special far-off land where God’s promises would find fulfillment in the latter days.

Ever since Jacob lay his hands upon the head of his son Joseph, promising that the greatest of blessings would come to his descendants who would inherit the utmost bounds of “the everlasting hills” (Genesis 49: 22-26), it has been clear that certain places on this planet were prepared long ago to play key roles in the unfolding human story.

None of this is new to most members of the church today. But how did the wealth of the land we now call the USA come about? Why did other great land masses such as Canada, Russia or Australia not achieve a comparable degree of wealth? What distinguished it from them?

The answer can be summarized in a single word – geography.

The size of the land is not itself the answer; for example, the Russian Federation is nearly twice the area of the continental US. Canada and China are also larger. The island continent of Australia is only a little smaller than mainland US. However, anyone who flies over these other lands will find the difference from the US very obvious. While places of great beauty are found all over the world, these other lands do not present the vast swathes of fertile land and frequent rivers that I saw on that recent flight. Much of these other lands is either permanent desert or tundra, or else is unusable for much of the year.

In contrast, because of its mostly temperate climate, resulting in good soils that can grow crops most of the year, the US has the largest amount of arable land on the planet. Even today, when agriculture has dropped to only about 2 percent of its economy, the US still exports more food than any other nation.

But there is much more to the answer than climate. To begin with, geography has ensured that the U.S. has little economic competition from other countries in North America. To the north lies colder and often mountainous Canada; to the south vast deserts lead to Mexico which has never been able to develop agriculture in significant ways. And to the east and west, oceans cushion the US for thousands of miles. However, perhaps the largest single factor contributing to the economic stature of the U.S., is rivers.

Almost all countries have rivers, of course, but America’s have some unique characteristics. Firstly, there are an astounding number of them, over a quarter of a million, flowing for a total of more than 3.5 million miles. More importantly, most of them – led by the mighty Mississippi – link with other rivers, thus providing all the various agricultural areas easy transportation to markets. Other countries have significant rivers also, but none of them intersect with others to the extent America’s do. To use Russia as an example, its major rivers rarely link with each other and its largest rivers flow northwards into the barren Arctic wastes. The river Volga flows south, but it arrives at the Caspian Sea, which is not only landlocked but freezes over for months each year. 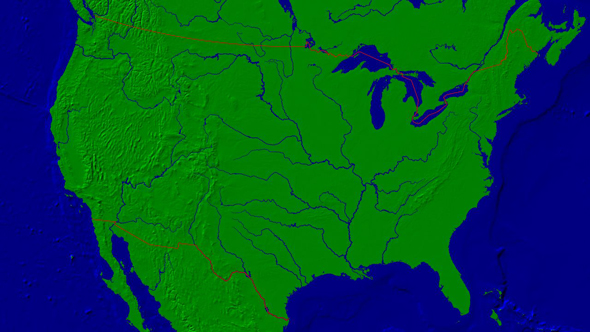 America’s immense river system, the largest of any land, is aided by another fact – the US has the three largest natural harbors in the world: Chesapeake Bay and New York Bay on the East coast and San Francisco Bay on the west. These, and the many other smaller harbors, facilitate shipping in all directions to all regions of the world. This built-in advantage of frequent, intersecting rivers and natural harbors allowed America to develop rapidly without it being necessary to invest huge amounts of capital in the basic infrastructure of any economy – transport facilities. It ensured that the agricultural output could be shipped to markets from the outset, not just after long and expensive development.

And without enemies on its borders, no large standing military force has ever been necessary, a severe economic drain in many other lands. Using Russia again as an example, its land borders with 14 other nations, many of them hostile, require a hugely expensive permanent military presence. But, with its resources freed up for expansion in other spheres, the US quickly became what has been called “the inevitable empire.” 1

Thus, there are reasons why the land we now call the United States, and not Russia or China or some other place, was prepared for a great destiny in our day. Eons ago the Lord prepared it and separated it, keeping it mostly unpopulated and undeveloped until its unique geography and abundant resources were needed. They became the seed-bed that made it possible to both nurture and promote the Fullness of the Gospel. 2

1. Anyone wishing a fuller analysis of these factors should consult “The Geopolitics of the United States, Part 1: The Inevitable Empire” available at www.stratfor.com/analysis/geopolitics-united-states-part-1-inevitable-empire

2. Of course, I do not mean to imply that the US is the only land of promise and the only place of great importance in God’s plan; clearly others including lands in the Near East are also pivotal. This article seeks to show that characteristics we would normally consider as “natural” have contributed to the stability and prosperity of the US to facilitate its prophesied role. We must also never forget that the inhabitants of all lands are blessed with promises that are predicted upon righteousness. As the Book of Mormon repeatedly and vividly illustrates, we neglect this principle at our peril.