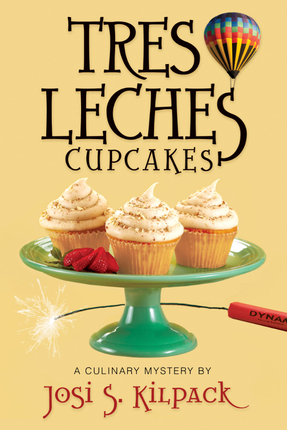 It’s been fun watching Josi S. Kilpack grow from a good writer to one of the top writers in her field. Much of that growth has been evidenced in her culinary mystery series starring middle-aged sleuth, Sadie Hoffmiller. There are eight books so far in the series and though each one can stand alone, it’s more fun to read them in order. The first books in the series were good, the middle ones were better, and the past three are exceptional. Tres Leches Cupcakes is her latest offering and certainly one of her best.

In Pumpkin Roll, two volumes back (and my personal favorite in this series), Sadie was seriously injured physically, but also emotionally, and her life was threatened by an enemy who got away. There’s reason to believe the threat is still valid, so Sadie’s boyfriend, Pete, arranged for her to recuperate in Hawaii. Of course that led to another mystery, Banana Split, but now in Tres Leches Cupcakes, she’s still hiding out. This time in New Mexico. She was welcomed with open arms by her dear friend, Caro, but Caro’s husband, Rex, isn’t too happy with the arrangement. Understanding her need to be doing something, Pete arranges for Sadie to work on an archeological dig and to be an undercover investigator for the BLM. She’s only supposed to create profiles of the other workers and keep her ears open for any information that might be passed on to the BLM that might concern antiquities theft. When two recently deceased bodies are unearthed at the dig a full scale mystery erupts and Sadie finds herself right in the middle of it.

In earlier books Sadie was a nosy busybody who seemed to invite trouble through her own naivety and presumptuous arrogance, but she’s more cautious and humble now. She follows the rules, with one small exception, keeps in close contact with Pete and the police, and really tries to avoid trouble. However when a drunk lunges at the friend whom she’d accompanied to a sleazy bar in hopes of gaining a little information, she manages to start a brawl that results in Sadie’s arrest and an overnight stay in the Santa Fe jail.

Rex wants her to leave his home, so she does, but in the process hurts her friend, Caro’s feelings. She travels to Albuquerque, where she gets a hotel room, and plans to stay for the annual balloon festival where both she and Caro have committed to help another friend with her cupcake booth. Working in the same booth is awkward, but Sadie is impressed by the festival with its hundreds of colorful balloons. She even accepts a ride on one of the balloons with a man she suspects has some connection to the antiquity theft case.   Soon the action is fast and furious and judging who is an ally and who is the enemy becomes a major challenge.

I like this more mature and caring Sadie the heroine has become. She feels much more realistic and likable than the Sadie we first met in the early books. Her character has more depth and the reader can see the strides she makes in becoming a better person. The background of this story is interesting and works well with the sharp contrasts between the dry, dusty desert and thousand year old artifacts and the modern New Mexico that presents art shows, holds a world famous balloon extravaganza, and equips their police department with modern technology. Kilpack’s research into the black market antiquity trade is fascinating and she does an excellent job of explaining the various points of view concerning these remnants of an ancient civilization.

Being that Tres Leches Cupcakes is a culinary mystery, Kilpack has added a generous number of recipes popular in New Mexico. I usually skip the recipes in this type of mystery, but I did scan a few of these because I like Mexican food and they looked interesting. Of course there are several cup cake recipes, including the title one featured on the cover which is a sticky, filled cupcake topped with white chocolate and cinnamon.

Josi S. Kilpack has seventeen published novels to her credit and has received several awards for her writing. She was recently released as the chairman of the Whitney Awards Academy where she served for two years. She lives in Willard, Utah with her husband, children, and dog.