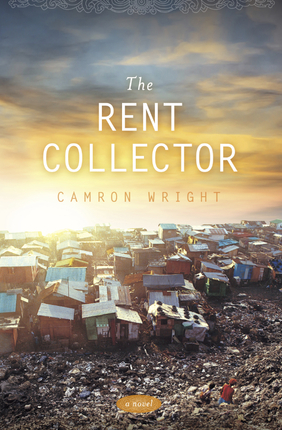 The Rent Collector by Camron Wright is one of those rare books that stretches beyond a great story to touch the reader’s soul. It’s based on a real family living in a garbage dump in Cambodia. It is not a depressing book as one might expect. There is much that is sad or deplorable, but the theme is based more on hope, the human drive to move beyond the negative, and the belief that there is always the possibility of a second chance.

Ki Lim and Sang Ly live in a shack inside the largest city waste dump in Cambodia, Stung Meanchey, with their infant son who is ill and often requires treatments the young couple cannot afford. Ki spends from dawn to dusk digging through the dump, searching for anything recyclable to earn enough coins to buy rice and a few vegetables for that day’s food. If he’s lucky he puts away a coin or two to pay the rent on their miserable shack. Sang Li picks through the dump as well when she can, but most of her time is taken up with caring for her small ill son. An ornery, cranky old woman comes once a month to collect the rent.

One day Ki Lim finds a picture book in the dump and brings it home, thinking his son might enjoy looking at the bright pictures. While Sang Li is showing the book to the baby, the rent collector arrives and threatens to evict them since Sang Li doesn’t have enough money to pay the rent in full. She spent part of the money on medicine for the baby. The rent collector sees the book and grabs it; it seems to make her emotionally distraught, but watching her, Sang Ly realizes the old woman can read. As the two wrangle over the rent and the book, a plan is eventually worked out whereby the old woman will teach the young mother to read and the rent collector will keep the book. Sang Li will also provide the rent collector with a bottle of the best rice wine at each lesson.

Slowly Sang Li learns to read and is firm in her belief that if she can read, she can teach her son, and it may be his only way to a better life beyond the trash dump. In time she learns her previous thoughts concerning the old woman are not true. She isn’t just a drunken old crank, but a former college professor who lost everything at the hands of the Khmer Rouge during their vendetta against anyone educated, and she is terribly ill.

The people living in the dump are harassed by gangs and at night they don’t dare leave their shacks for fear of being run over by the bulldozers that bury the day’s refuse and stir up the fires that burn constantly beneath the surface. Ki Lim is robbed and nearly killed one day when he is particularly successful. He carries a huge knife with him after that and he and Sang Li often argue between them about whether the knife or learning to read is their son’s best defense.

Learning to read changes Sang Li’s life during her quest to save her son’s life. It also builds a bond between her and the rent collector as the old woman teaches her not just to read, but to see literature and stories all around her. She learns of the links between cultures as she learns of the classic stories that are repeated with cultural changes, but with the same message, told around the world. Through the lessons, she learns to see meaning in every story and every life. The old rent collector who knows she is dying gains a kind of redemption for a long ago failure by omission which has haunted her most of her life.

The characters, even the minor ones, are drawn with exquisite care and their growth is touching and real. The plot moves forward at a satisfying pace with surprises hidden in unexpected places. This story is not a tear-jerker, but it delivers an emotional impact that will not soon be forgotten.

I like this book; a lot! I think it will appeal to teens as well as to adults and to both men and women. It will be of particular interest to those who love to read or write and who feel an affinity to world literature. It will have an impact, too, on those who understand that happiness, hope, and compassion are not bound by geography or wealth, not even when home is a three story mansion or the city garbage dump.

Camron Wright holds a master’s degree in writing and public relations. His first book, Letters for Emily, was the recipient of numerous honors. He lives with his wife, Alicyn, in Utah. The Rent Collector is scheduled for a September release.