They Did Not Doubt- 2,000 Stripling Warriors March in Bountiful | Meridian Magazine

They Did Not Doubt- 2,000 Stripling Warriors March in Bountiful 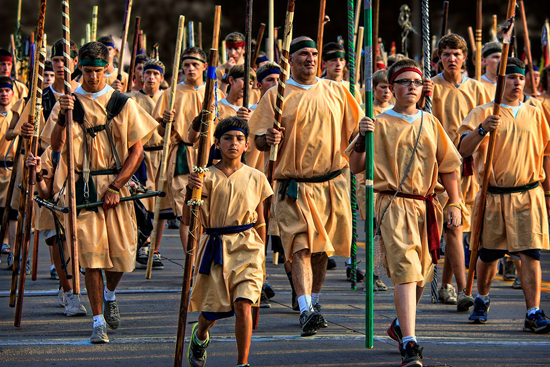 Have you ever wondered what 2000 stripling warriors look like? President Cory Hanks of the Bountiful South Stake wondered.

For years President Hanks has been asked visit youth groups to tell the story of Captain Helaman and his 2000. He would, on occasion, come into their camps dressed as the ancient warrior while the young men were having an activity. Slowly, a hush would come over his audience as they turned to see the rather strange sight. Captain Helaman would then begin telling them of what was going on just over the hill. He would tell them about his young sons and the protection of the priesthood that they had been promised them by their mothers.

At the end of his story he would always tell them the same thing: they too were in a battle, right this day, in enemy territory. He would tell them that the enemy is all around them, and the fight is urgent.   Then the question would be, “will you come with me to fight? Will you be one of my sons?” Tears would fill the young men’s eyes as they anxiously would volunteer to be a warrior as well.

One night, after speaking at one of these youth groups, he turned to his friend, Danny Brock and asked what he thought that 2000 warriors looked like. Brother Brock tried to imagine. It was then that President Hanks told him that he wanted to try to gather 2000 young men together, perhaps to march in a parade. That was 12 years ago. President Hanks was then Bishop Hanks. Finally when he was called as a stake president, his wife, who knew of his dream, told him, “If you are ever going to do this, now is the time!”

In 2011, President Hanks presented the idea of the 2000 young men dressed as Helaman’s sons to the 13 stake presidencies that sit on the Board of Directors for Bountiful Handcart Days and they accepted it for 2012. So come January, they went to work. Danny Brock was in charge, since President Hanks had heavy responsibilities as Stake President and he knew that Danny Brock had the vision of this idea. They called a wonderful committee that also had the vision. Costumes, wood staffs for the warriors, communications, publicity, logistics, even porta-potties and water for the 2000 boys waiting 3-4 hours for their parade entry to start. It was difficult, but they never doubted that heaven was watching and waiting for this to happen.

President Hanks made it clear that it wasn’t about the march. He suggested that every boy and young man write his testimony in the cover of a Book of Mormon, tell the story of Helaman and his stripling warriors, give it to a non-member or less-active friend, and then invite them to come march. Several wards followed those instructions and one ward had 3 non-member boys march, one of whom asked for the missionaries. 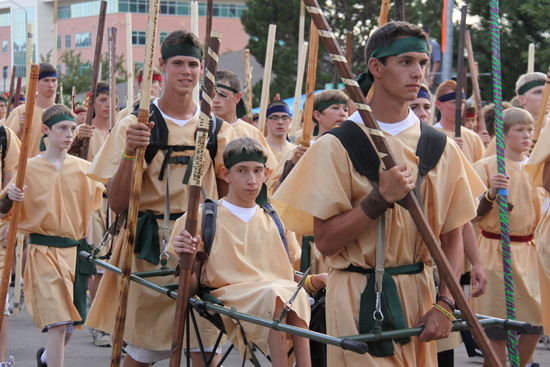 Jonathan Knudsen and Spencer Fennemore also caught the vision of what was to be a one time only opportunity. Spencer has a brother named Mitch who has Spina Bifida. Mitch is beloved of his family. He is always happy and never complains. For that matter, he is beloved of his ward and community. When Mitch turned 14, he was old enough to go with the scouts on their high adventure outings. Mitch wanted to go, but with his disease, it would be impossible to be with his friends. It was then that Jonathan decided that Mitch would come with them. They would make a portable carrier for Mitch that would allow him to hike, and even rappelled with his scout troupe. Jonathan decided to do it for his Eagle project. They enlisted the help of the community. The steel was donated as well as other materials. When he finished, he named it the Mitch Mobile. It was made to be donated to the Spina Bifida Association. This year, Spencer and Jonathan decided that Mitch would not only use the Mitch Mobile for hiking, but that they would carry him in the parade with the other 2000. It was a thrilling, touching sight. Surely heaven was watching.

Along the parade route the boys, who walked the route with staffs, would occasionally stop and begin a slow pounding on the pavement. The pounding would increase in speed and intensity until finally the whole 2000 would yell with one voice that would quake buildings, “We do not doubt!” The Sunday after the parade, a young Justin Maxwell spoke in sacrament meeting. He told his audience that when they first stopped and hit their staffs on the ground and yelled, “We do not doubt!”, that it was so powerful that the very buildings around them shook. The audience became emotional and laughed, cried and cheered. He almost cried because the spirit was so strong. His mother, Kristy later said that the march of the 2,000 had changed her two sons eternally. 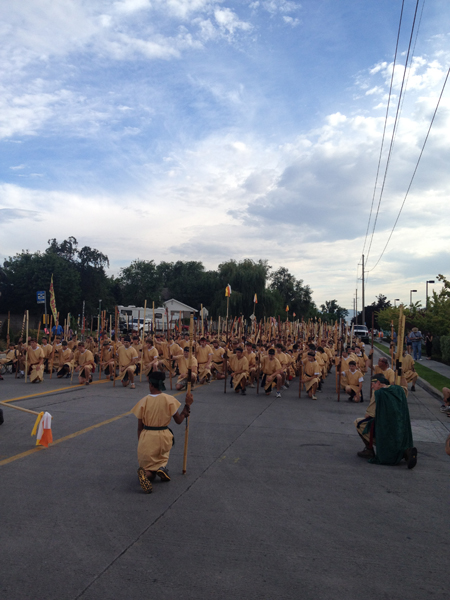 Two weeks before the parade, the call was given for everyone to fast and pray that the hot weather might be tempered. They were concerned that the boys would be so hot, that it would distract from their experience. Everyone who was involved with the parade, all of the many committees, bowed before the Lord and prayed for the weather to be tempered that the boys would be able to feel that great spirit that was to be present.

The day of the parade was to be hot. Some of the weather reports suggested a temperature of 97 degrees for that day. It was quite warm in the morning as the day began, then at about the time the parade was to begin, a cool breeze began to blow. Clouds began to form and cover the sun. The temperature dropped and as the boys began to march, people were wondering if maybe we were going to have a storm instead. The storm did not break loose until after everything planned for Bountiful Handcart Days was over for the evening. Then the skies opened up and the land was blessed with moisture. Truly heaven was watching. We believe in a powerful God!

It was a blessing both to be a part of this even as well as participate in the parade. This was a never before and never again event that changed and blessed many lives.

Check out Bountiful Handcart Days .org, for a video of President Hanks dressed as Helaman and telling the great warriors story (see Sons of Helaman).