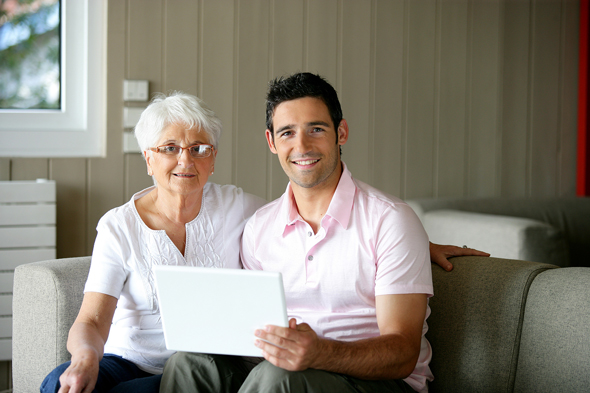 I’ve always told my kids, when they choose a mate, to pick someone who’s already a good home teacher or visiting teacher.  From my perspective, locking in this one attribute ensures a host of other linked traits: Love of the Lord, compassion for others, willing service, selflessness, even the mastery of time management.

And then during the recent Olympics, I was so impressed with the humility and sweetness of one young man that I said to my daughter, “He’d make a good home teacher.”  She nodded and observed that he had none of the cocky self-centeredness of another athlete we had just seen interviewed. You could really picture him determinedly knocking on a door, smiling, and trying to offer sincere help.

And thus it began.  We started a game of watching not only these sports celebrities, but their coaches and interviewers, and trying to guess how they’d be as home or visiting teachers.  Some people just seem as if they’d be dedicated visitors who truly care, and others seem so self-absorbed or flaky, that they wouldn’t be reliable or even kind enough to engage in charitable service.

It’s a silly game, even wildly judgmental-after all, who really knows how dedicated these complete strangers would be in reaching out to a struggling widow down the street?-but it made us think about our own efforts to eradicate pride and selfishness, and go the extra mile to help another.  Quite honestly, consistent home or visiting teaching can take as much dedication as training for the Olympics, especially if you have a huge list to see each month, or if some of your people are especially resistant.

Yes, I know a person can be a less than stellar home teacher for other reasons, too. Some people care, but are so painfully shy that they hesitate to make appointments. Others have impossibly busy schedules, or companions who simply won’t cooperate.  So I know it’s more than a good heart that can affect the outcome here.  But this little exercise isn’t about those extenuating circumstances-it’s about how well someone would do if the only obstacle to their success was their own willingness to do it.

And we also realize that a snippet of time on television can present a skewed view of one’s personality.  Someone can nervously come off as an arrogant know-it-all and then cringe backstage later, as they realize how false this image is-maybe that person is actually generous and giving.  Likewise, someone can appear very tenderhearted for a few minutes talking to Jay Leno, and then go off in private to be a raging egomaniac.

So we know our hunches are probably miles off the mark, and that’s why we don’t take it that seriously.  But weren’t you impressed with the sincerity and the work ethic of the some of the Olympic athletes recently interviewed?  They were only on camera for a few moments, but we judged them.  We either liked them and thought they seemed like genuinely good people, or they rubbed us the wrong way.  It’s human nature to draw assumptions and make snap judgments.

And so we evaluate as we watch someone on the news, posturing in anger, convinced they’re a victim.  Would this person be able to set aside their entitlement issues and focus on somebody else’s problems, maybe give them a hand?  It’s hard to reach out to someone else when your arms are crossed and you’re mad that nobody’s reaching out to you.

How about the famous actors, talk show hosts, news anchors, rock stars, and athletes whose personalities are well-defined in our minds?  Who comes across as genuine and likeable, and who seems full of himself and unable to form happy relationships?  And which, of all these qualities, do we ourselves have or need to work on?

I suppose that’s the value of the game-it makes us analyze ourselves the most of all.  Does our public persona match our private beliefs?  Do we practice what we preach?  Do the folks who know us, like us?  If someone analyzed our personality, would they conclude that we would be a caring, dedicated Home Teacher or Visiting Teacher?

In talking to my daughter, and noticing how easy it was to imagine various people in the role of home teacher or visiting teacher, I asked her what the key trait was, that seemed to tip the scales and make someone seem unable to rise to the task.  She spotted it instantly.  “Selfishness,” she said.  That’s the trait that made it hard to picture someone succeeding in this form of service.  And sure enough, it’s the chief obstacle in real life, as well.