Mormons in the Olympics: Jake Gibb 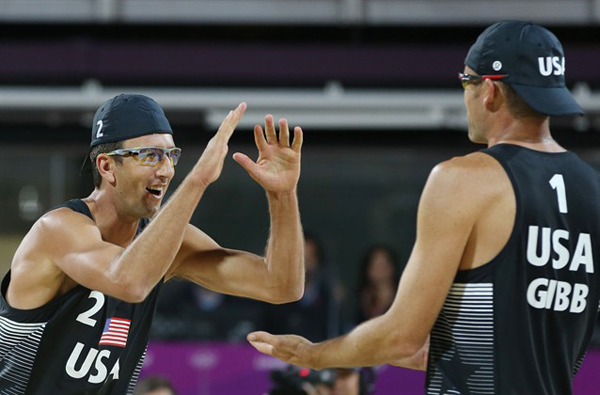 American beach volleyball players Jake Gibb and Sean Rosenthal beat Latvia in straight sets on Wednesday to win their Olympic pool and advance to the knockout round of the tournament.

After finishing fifth at the 2008 Olympics, Sean Rosenthal makes his second Olympic appearance in London with Jake Gibb, his partner since 2006. The duo clinched a spot in the London Games at the FIVB World Tour Rome Grand Slam,. Rosenthal and Gibb secured enough points by reaching the event’s semifinals, but they also went on to win the tournament, dominating reigning world champions Emanuel Rego and Alison Cerutti of Brazil in the final (21-13, 21-12).

At the Beijing Games, the No. 7-seeded Rosenthal and Gibb won their group and advanced to the quarterfinals before losing to Emanuel and Ricardo Santos, the 2004 Olympic champions.

Rosenthal and Gibb teamed up in 2006, a year after Gibb finished No. 1 on the AVP Tour with Stein Metzger. After the 2005 season, Metzger’s childhood friend, Mike Lambert, approached him about teaming up to go to the Olympics together. So despite being on the AVP Team of the Year, Metzger dumped Gibb to join Lambert. Gibb’s first choice as a replacement was Rosenthal.

“Before I played with him he was the kind of guy that I would go watch when I wasn’t playing in my matches because he’s super exciting and fun to watch,” Gibb says of Rosenthal. The duo won their first tournament together, the Fort Lauderdale Open in March 2006, defeating — who else? — Metzger/Lambert in the final. Rosenthal was selected as the FIVB Tour’s top rookie in 2006 and the AVP’s best defensive player in 2007.

In 2009, Rosenthal and Gibb played only six international tournaments, winning just one bronze medal, because they spent most of their time stateside on the AVP Tour. They made it to five finals that year but won only once, albeit in the most prestigious American tournament, the Manhattan Open. They didn’t win another tournament until Rome in June 2012, their first career Grand Slam title. Rosenthal and Gibb competed in six AVP events in 2010 before the tour collapsed, placing second once and third twice. On the World Tour that year, they failed to make the semifinals in 10 appearances. The duo appeared 14 times internationally in 2011, with its best finishes being a silver and bronze. At the world championships, Rosenthal and Gibb placed 17th, their worst showing after taking ninth in 2009 and fifth in 2007. But Gibb and Rosenthal improved dramatically in 2012, winning medals at five of the 10 tournaments they played before the Olympics (two gold).

The reason for their resurgence in 2012 could be related to 1996 Olympic silver medalist Mike Dodd returning as their coach. He led them in 2008 and 2009, but then left to become the AVP commissioner in 2010 and the Italian beach volleyball coach in 2011. Neither Rosenthal nor Gibb had traditional volleyball training growing up, as neither played for high school or college indoor teams like many beach volleyball pros. “We’re both kind of these unschooled athletes and we come in and get taught by this master (Dodd),” Gibb says. “It’s really a cool thing where we both kind of learn together.” While both players say they may be physically healthier now than if they’d played indoor volleyball growing up, they both say they had bad habits that could’ve been eliminated by coaches earlier.

Gibb got an especially late start in the sport, as he didn’t begin playing regularly until he was 21 years old, after he returned from his mission to Costa Rica. He originally thought volleyball was a girl’s sport, but after playing in a recreation league his senior year of high school, he began to like it. While on his mission, Gibb grew about four inches to 6-foot-6, and started playing extensively in his backyard with his twin brother, Coleman, (6-foot-1) when he returned home.

Gibb never took up volleyball while he attended the University of Utah. In 2000 he competed in some AVP events with a friend who paid his expenses to help him qualify for the AVP Tour, which they did. However, Gibb returned to school, graduated in 2002 with a degree in business and was working at a bank training to become a commercial loan officer before he decided give beach volleyball a real try. With $1,600 in his pocket, Gibb and his wife, Jane, moved to California later in 2002.

Gibbs’ wife, Jane, is a former volleyball player who also graduated from Utah in 2002.

The youngest of 11 children (six boys, five girls), Gibb’s legal middle name is Spiker, which was the maiden name of his mother, Saundra. A huge Utah Jazz fan, Gibbs grew up hoping to use his height to play basketball. But as a 6-2 senior at Bountiful High, he was cut from the team. Gibb golfed a lot growing up, and now plays frequently with Rosenthal.