One Ring to Rule Them All… 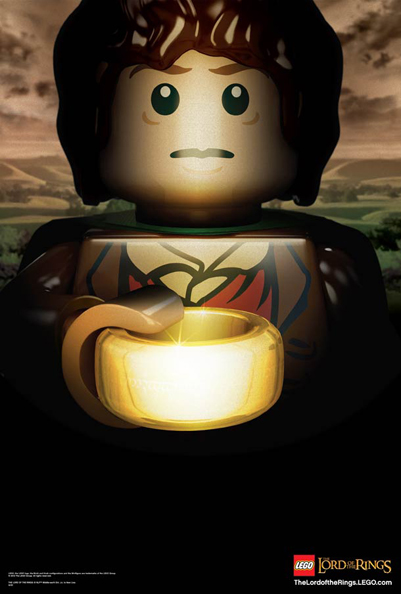 “Andy, put that away!” I hissed. “Church is not the place to pore over that darn Lego catalog for the hundredth time! I’m serious. Put it away.”

He shot me a horrified glance, surprised by my brazen blasphemy. He clutched the pages to his heart as if to say, Sacrilege! Surely it’s only days now until this particular issue is canonized.

“But it’s practically a sacred book,” he stage whispered back.

“Nice try. Put it away.” He finally did, and then promptly slumped his shoulders and bowed his head, more reminiscent of a disappointed Charlie Brown than a penitent congregant.

I didn’t even know it was possible to combine two true loves like that. The Lord of the Rings Lego debut was like…like…. chocolate and peanut butter. No, marshmallows and campfire? No, more than that. Winning the lottery on Christmas morning? You get the idea.

Anyways, that was the level of excitement standing there in the Lego aisle of Target looking at the Lord of the Rings Lego sets. There we stood, all six of us, hand in hand, babe in arms, mouths agape, only daring to whisper as to not upset the reverent tone of the moment. “Wow,” we exhaled. “They’re here. They’re finally here.”

Then when the catalog came in the mail featuring the 1 1/2″ Frodo and Aragorn figurines and all of their accompanying mind-blowing expensive sets, well, my first thought was, “It’s going to be a long summer.”

Or is it? At first I thought there would be a lot of whining and begging and gnashing of teeth. But there hasn’t been. I’ve concluded there is a distinct advantage to there being something your children desperately want to buy but is too expensive for you to just dole out. Money finally becomes a motivating incentive for them. Just the other day, that same 10 year old who wants a scripture case large enough to accommodate his catalog asked me if I would please make a list of “extra” chores that I would be willing to pay for and their rates. Okay!

Does he really want to clean out the refrigerator, soaping down the crisper drawer and all? Will he really get down on his hands and knees with an old toothbrush and a bucket and scrub the baseboards? Will his desire to build the Mines of Moria be enough to compel him to clean up the vomit catastrophe in the back of the van? (Note to self, those will be our last hot dogs of the summer.)

Last night, a darling 12 year old boy rang our doorbell after dinner. He was going door to door selling cookies he had baked himself. 25 cents a pop. “I’m trying to earn enough to buy my own airsoft rifle,” he mumbled in the same breath as their flavor, chocolate chip. I was so impressed by his entrepreneurial spirit, I, who normally loathe solicitations, bought cookies all around, even if they were a bit burnt around the edges. Good for you, I thought. And good for your mother for teaching you a thing or two about earning!

So here we are, just days into our summer vacation and I’m reveling in my worker bees. They are mowing lawns, washing cars and finding latex gloves very handy. There’s even talk of a lemonade stand later this week. Exactly how many LOTR sets are there again? I don’t think we’ll run out of proverbial carrots for while. I’d better consult the catalog again.

Whose the Lord of the Ring now?