Romance, Snow Storms, and Spiritual Growth in My Lucky Stars 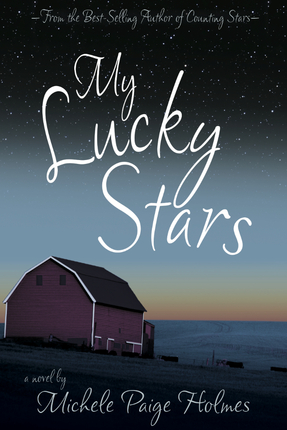 Not wanting to spend Christmas alone, Los Angeles real estate executive Tara Mollagen, makes last minute plans to spend the holiday with friends (more like acquaintances) in Denver. Unfortunately the airline’s first class seats are taken and she has to settle for coach, an obnoxious preteen seatmate, and a major snow storm that leaves her flight diverted to Salt Lake City. Her claustrophobia kicks in, placing her in the awkward position of dealing with a panic attack and an embarrassing vomiting session. When the rerouted plane lands, more trouble awaits her; her wallet and credit cards are gone from her purse, her luggage is lost, and her cell phone battery is dead.

My Lucky Stars by Michele Paige Holmes begins with a litany of woes, but as the reader gets to know Tara it’s hard to feel too sympathetic. She’s spoiled, bratty, and expects everyone to jump to do her bidding. While she’s indulging in a pity party and screaming at airline employees, Ben Whitmore takes pity on her and offers help. He only means to find her a hotel room to tide her over until she can access her bank account, but his sister and six-year-old niece join in the conversation, offering her dinner and a couch at their house for the night even though they’re almost packed for a move to Denver. The next morning Ben is coerced into taking Tara shopping since she doesn’t have so much as a change of underwear. She turns up her nose at Sears so he takes her to D.I.

Without quite knowing how it happens he finds himself driving his sister’s U-haul to Denver in a snowstorm, Tara seated beside him, with his sister and her three children following in a van. Even before Tara arrives on the scene he wasn’t anxious to make the trip because he doesn’t want to have any contact with his brother-in-law whose sister is his former fianc. Tara and Ben spend most of the trip sniping at each other, but there’s that one magic moment . . .

Once Tara is back in Los Angeles, she finds some of Ben’s words and his actions sank in deeper than she realized. When she is ordered to fire most of the staff at the agency where she works, she quits and heads for Seattle for a reunion with an old college friend. She arrives to find her friend is expecting twins and has been ordered to complete bed rest. Her friend considers Tara the answer to her prayers, but Tara thinks she has dropped into her worst nightmare. Tara’s friend and her young daughter pick up where Ben left off; cleaning up her vocabulary, putting her to work, teaching her about serving others, and she even goes to Sunday School.

Tara is a great character who goes from extremely unlikable to a truly sympathetic character, working hard to change her life. Ben does some changing too, but he doesn’t play as prominent a role as Tara in the book so we don’t see his problems or his changes taking place as up close as we do hers. Holmes shows more of her religious convictions in this book than we’ve seen in her previous books, and though Tara does some soul searching concerning spiritual concepts, these scenes are handled well and don’t become preachy.

My Lucky Stars is a romance novel and the development of the love story follows the expected formula, but the twists and turns, the bumps and misunderstandings, are fun to follow. Romance and general fiction fans will find this book a satisfying read.

Michele Holmes grew up in Arizona and northern California. She graduated from BYU with a degree in elementary education. She has three previous novels to her credit, all of which won awards or were finalists in writing competitions. She and her husband are the parents of five children.