SANDY, Utah – Whitney Awards were presented to seven “Best of Category” authors along with three Lifetime Achievement honorees at a gala ceremony Saturday evening. The awards ceremony capped off the LDStorymakers conference held at the Cottontree Inn in Sandy, Utah. 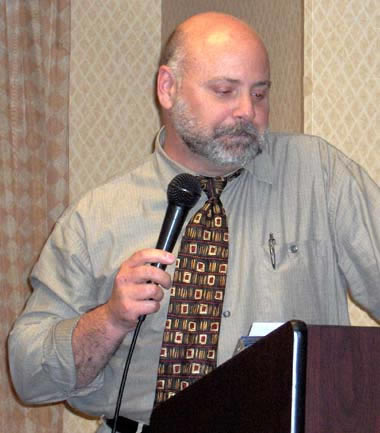 Coke Newell, winner of the Novel of the Year Award.

Novel of the Year went to Coke Newell for On the Road to Heaven. Best Novel by a New Author went to Jessica Day George for Dragon Slippers. 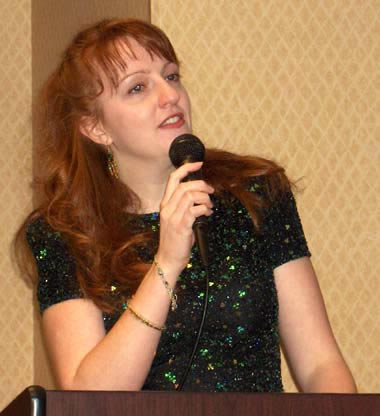 Jessica Day George, winner of the award for Best Novel by a New Author.

Lifetime Achievement Awards were awarded to Jennie Hansen, Dean Hughes, and Anita Stansfield for their bodies of work and their contributions to bettering LDS fiction. In addition to the long lists of books each has authored, they have all three been pioneers in the industry and have worked toward establishing high standards for LDS fiction, being first in creating trends, critiquing, proving the marketability of LDS fiction, and in encouraging new writers.

The Whitney Awards are named for a statement by Orson F. Whitney who said:

God’s ammunition is not exhausted. His brightest spirits are held in reserve for the latter times. In God’s name and by His help we will build up a literature whose top shall touch heaven … We will yet have Miltons and Shakespeares of our own.

Winners were selected first by a nominating process in which anyone who read a novel by an LDS author and liked it was invited to nominate that book and author. There were more than 600 nominations, which were then whittled down to five nominations in each category by the Whitney Awards Committee.

Members of LDStorymakers and representatives of the industry such as bookstore people, editors, publishers, reviewers, and bloggers made the final decisions.

Nominations are now open for nominees for 2008. Any fiction novel published in 2008 and written by an LDS author is eligible. Many fine novels in 2007 were rendered ineligible because they failed to get the requisite five nominations. This award has nothing to do with highest number of sales or academic excellence, but is awarded to those authors whose fans think they deserve recognition.