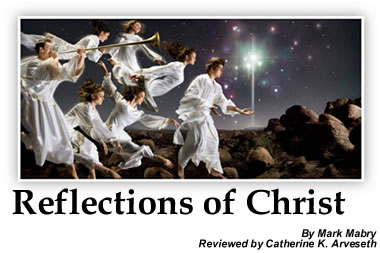 (Click on the book cover to purchase your copy today.)

A Compilation of Witnesses

Months ago I received an email from a friend inviting me to view a new art exhibit online. It was a slideshow of Mark Mabry’s photography – Reflections of Christ. Mabry is a professional photographer who focuses mostly on family and commercial portraiture. As I watched the slideshow of images, I was quickly drawn into the scenes. One of my favorite hymns played in the background – “Come Thou Fount of Every Blessing.” Mabry’s work was stunning, fascinating – a form of realism depicting the life of Christ unlike anything I had seen before. Some images spoke to me more than others. But in the end, I was genuinely touched – and intrigued, wondering how he had accomplished such a project.

The photos were first displayed in Mesa, Arizona, where they were seen by more than 100,000 people. Since then, over 1.3 million people around the world have clicked online to see Mabry’s images. (You can see a slideshow of the images at www.reflectionsofchrist.org under “multimedia”.) Currently, the exhibit is touring Canada and the U.S., with stops in California, Utah, Idaho, Texas, Massachusetts, Louisiana, and Washington D.C.

Mabry’s book, Reflections of Christ, is a collection of full-page photographic images that begins with the angelic message of Christ’s birth and ends with the Lord’s ascension. It is complete with artist notes and an inspiring telling of the story behind the project. When Mabry was asked to explain the project, he described it as a “compilation of witnesses.” It is this facet of the work that I found most moving. Mabry’s lone witness of the Savior is powerful. But it is the collective witnessing of all the artists and actors involved that makes it so worthwhile. Mabry’s compilation creates, as the title implies, numerous “reflections” of Christ – not just in the 26 images themselves, but in the testimonies of those who participated and their devotions to the Lord for his unparalleled mercy.

The Making of Mabry

Am I where I can do the most good? As a twenty-nine-year-old portrait photographer with a relatively successful studio, Mabry knelt to ask God this question. He wondered if photography was where he could do the most good. He contemplated changing careers. The nearer it came to his thirtieth birthday, the more nervous he became about his future. He writes,

The prayers continued, quietly, so as not to upset my wife with the news that I was entertaining different career options. I never got the brilliant, one-shot answer that I anticipated and sought. Instead, I was given a year-long series of step-by-step, life-changing promptings.

Mabry received instructions from the Spirit that were simple and direct. “Change your music.” So he cleaned out the music storage on his iPod and began listening only to music that was worthwhile and uplifting. This helped him “go in and out of mental prayer without much white noise.” He said he could, “love deeper and communicate better” while his command of language improved.

Instead of a warm “Yes, son”, I felt the incredulous stare of a loving Father. After the meeting, I drove straight to my studio, gathered my art collection, and dumped it in the recycle bin outside. I felt liberated and closer to God. The experience made me pause to evaluate the power of my chosen medium. I had to ask the question again: How can I be righteous in a field where most of the legends are not?

These are just two examples of the fine-tuning Mabry experienced as the Lord prepared him to take on the “all-consuming” project of Reflections of Christ.

I was touched that Mabry would share this part of his “making” so openly. It is a fitting preface to the display of his work. Mabry received guidance with respect to small things in his life, yet changing those small things yielded a significant rise in his spiritual sensitivity. Change improved his relationship with God. All of us have “small things” in our day to day living that could use some attention, submission, or sacrifice. If we would seek to know them and then act, imagine what we could accomplish. We could be used more effectively by the Lord.

Behind the Scene Stories

When you know the story behind any art form, it is enhanced, amplified, and more profound because you, the receiver, understand, if only in part, its meaning.

Mabry wanted to recreate the most awe-inspiring moments of Christ’s life so that viewers would feel as if they were witnessing them first-hand. This attempt at authenticity led Mabry to carefully select his group of actors, and with the help of a fellow photographer, Steve Porter, scout locations that would resemble the Holy Land. They chose much of the deserts of Arizona, as well as some places in Mexico. Often the weather, natural lighting, and clouds, were just how Mabry needed them, or had prayed for them, and miraculously, in most backgrounds, no “photoshopping” was required.

One of my favorite images is simply titled, “Angels” (see slideshow). Maybe it is the Christmas season and our focus upon the nativity that draws me so strongly to this photo. It is breathless, magical, and full of joy. One moment in time – stilled.

“Angels” was Mabry’s first photograph. He thought it would be the most involved because he wanted to make his angels fly. Mabry recalls,

My first thought was to harness the actors and hoist them into the air, but for me, that wouldn’t allow for enough movement and flow…How could I put several angels in one frame without them stumbling all over each other?

One night I knelt, with a pencil and pad, determined not to get up until I had a solution. I prayed, fell asleep on my knees, woke up and prayed more. It dawned on me – use a trampoline.

It was a risky decision, not just for the health of my actors but for the photograph as well. On a trampoline, I would only have about a tenth-of-a-second window to get the shot…when the actor would be at the top of the jump, but not yet falling – just right in the middle. Weightless. Unchained. Moving like an angel through air and space.”

It worked. And the shot is amazing. I love Mabry’s concluding thoughts.

In the end, even though the angels appeared to the shepherds, I decided to leave them out because I wanted the focus to be on the joy of the message. It doesn’t matter who’s receiving the message because the message is the same to all of us – Christ was born. For me, this picture captures that moment of power – the delivery of that amazing message.

Mabry asked Robert Allen to play the part of Jesus. I don’t know much about Allen but I do know that anyone asked to portray the Son of God must feel inadequate and challenged beyond anything they have ever done.

Most recent film endeavors have left me turned off when it comes to the Jesus they chose, but I liked Allen. He looked to me how I would imagine the Savior to look and as I read Mabry’s notes, it became apparent that Allen did much spiritual preparation to play this sacred part. He memorized scripture, prayed, and did all he could to be as the Savior would want him to be. Often, other actors in the picture would catch his eye or connect with him on some level and feel as if they were interacting with the Lord himself.

One of my favorite shots of Allen during the Savior’s ministry is called “Wonder.” It shows Jesus crouched down next to a little boy. Jesus is holding a rock in his hand, talking quietly. The boy is looking at him, listening with love and admiration. I liked this photo, even before reading Mabry’s notes. I loved the lines – the sloping mountain behind, and the fact that Lord of All would humbly bend below this little boy who was standing at full stature. To me it showed the Savior’s reverence and love for little children. I thought of my own little ones and my role as a mother. Often, I ask myself if I am loving my children as Christ loves them.

Then I read Mabry’s notes.

Toward the end of the project, I began to feel disconnected from my family. I pulled my son, Marky, out of school for a few days and brought him with us on our last Mexican road trip to shoot the last few images. Knowing that this would be a unique chance to spend time with my son, we made some ground rules. The main rule was that when Robert put on the robes, we would pretend like Jesus was there with us. When we were set up to shoot…I got out a costume for Marky and brought him out for this picture. Robert spent time teaching him about the creation by showing him a rock on the ground and asking Marky if he knew where it came from. It was a unique chance for me to view my child in that setting, forcing me to assess my job as father. Do I look at my child as Christ would?

I will mention one final image – “Lovest Thou Me?” – taken from the Lord’s injunction to Peter in John 21. It depicts the Savior and Peter in silhouette, sitting across from each other over a small fire built on the sand. The sun is setting behind them just above the Galilee. The fiery sky is a stark contrast to the quiet exchange Peter is about to have with the Savior. I’m not sure where this shot was taken but it has a realness about it that I loved. I have always appreciated this teaching of the Savior – that if we love Him, we must feed His sheep but Mabry’s insights and self-examination go deeper. He writes,

I had been pondering the relationship of Christ and Peter. What did Christ mean when He asked, “Lovest thou me more than these?” I felt the Savior asking me the same question He asked Peter on the beach. Only the “fish” He was referring to were, for me, the entire creative process and photography itself. Do I love Him as much as I love creating the images of Him? For the first time, I had to make an effort to separate Christ the Savior from Christ the man in my pictures.

The rest of the stories behind the scenes I leave for you to discover – the testimony of the woman who played the adulteress, the Roman soldier who couldn’t refrain his weeping while they re-enacted the scourging of Jesus, the rain during the team’s shooting of the Crucifixion, and the man who played John the Baptist – how unworthy he felt. Each is a reflection – a witness of Jesus Christ’s divinity, ministry, and Atonement.

Mabry’s project is beautifully titled for the many levels on which it reflects the Savior. The pictures reflect Christ, the contributors reflect Him, and you, as the reader or viewer, will be moved to reflect upon Him in a way personalized for you. Reflections of Christ will make a wonderful gift for anyone of any faith who loves the Lord.

In addition to Mabry’s book of full-page photographs, a DVD documentary is also available that includes the story behind the making of Reflections of Christ. Mabry and his wife, Tara, live with their three children in Mesa, Arizona.