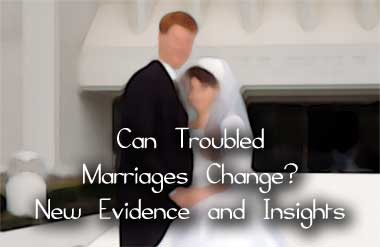 I like the lighter side of family life. Rubbing noses with a two-year-old. Watching a taped version of “West Wing” with my wife (we tape and watch it after Scouts and youth activities). Visiting with a sister or brother on the phone to catch up on the latest family happenings. I like it when family life is good.

Am I a pessimist about marriage? No. I am an optimist. I believe in marriage and its eternal significance. I embrace its opportunities for happiness, love, and fulfillment. But I know it can be hard. And I hear often, very often, and frankly too often, of disappointment that has turned to despair that has turned to divorce.

I think there are other answers. I am trying to learn what they are. Here is the intriguing question: Can troubled marriages change?

What Happens in Troubled Marriages?

Let me share just one thought from a recent study on marriage I want to highlight. The report states: “The kinds of marital troubles that lead to divorce cannot be sharply distinguished from the marital troubles that spouses overcome. Many marriages of middling quality end in divorce. Many marriages that experience serious problems survive and eventually prosper.” [1]

President Spencer W. Kimball, during his tenure as an Apostle, counseled literally thousands of couples on matters related to marriage and divorce. Much of his counsel on marriage has been printed and shared widely. But I want to share a seldom-heard experience on this topic from his biography. It is frank and pointed. It reads:

“[Elder Kimball] urged couples to cement their marriages with continual expressions of love, yet he knew that some, now obviously in love, would end their marriages in bitter divorce. On a mission tour he told one congregation, ‘When they fail to take care of their marriage they’ll come to the point of divorce and sit in my office and say they don’t love one another, that they never did.’ He went on heatedly, striking the podium, ‘That’s a damned lie!'”

End of story. What’s the point? What is the suggested path of outcome for most troubled marriage relationships? At least, what does the world often say?

Usually, it seems that couples who have become troubled or unhappy in the marriage relationship are told they have two options: (1) As married individuals you can stay together unhappily, or (2) As married individuals you can make a choice to separate or divorce. Yet we know there is a third option. I call it the “repair and repent” option. President Ezra Taft Benson, speaking on the topic of morality, once stated that it is much better to “prepare and prevent” moral problems than it is to “repair and repent.” Yet he also stated clearly that when such problems have come into a person’s life, “repair and repent” is an option, indeed, a powerful opportunity to change and become whole again.

There is a third option in marriage. It is possible for individuals in a troubled marriage to choose to stay together and work to resolve their problems. Will this work for every individual or every couple? No. But I am persuaded that it is far more possible than many of us realize, and indeed that it is probably far more common than we may know. Let me share the evidence.

I greatly enjoy conducting and learning from scientific research because it involves seeking out knowledge and insight. Knowledge is empowering. It can change our understanding in dramatic ways.

Recently, a team of family scholars led by Dr. Linda Waite of the University of Chicago conducted research on this very question of what happens in troubled marriages. They wrote that the “widespread assumption” that “divorce is better for adults than staying in an unhappy marriage” had never, to their knowledge, “been investigated empirically.”[2] Luckily, this team of scholars had access to a national study of family life that was conducted beginning in the late 1980s, The National Study of Families and Households, to learn more about this question.

The National Study of Families and Households is an in-depth survey of over 10,000 adults in the United States that was first done in 1986-87 and then repeated with the same individuals five years later. It is a representative sample, meaning it is a pretty good microcosm of the US population as a whole. In this study, all married adults (5,232 married adults) were asked both times, five years apart, to rate the quality of their marriage. They rated it on a scale of 1 to 7, with “1” being very unhappy and “7” being very happy. If you put “5” or more, that means you felt happy in your marriage, while “4” or lower meant you probably felt somewhat unhappy at varying levels in your marriage. Now it gets really interesting.

Why is this important? Think about it.

We speak so casually of “unhappy marriages,” as if the marriage itself were a piece of fruit that had slowly gone bad. You may hear things like “the marriage just isn’t working out” or “they have a very bad marriage” – as if each individual had nothing to do with it. If marriage is referred to like it’s a “bad” piece of fruit, then the common solution would be to throw it in the trash. But it’s often not. The same marriage, or the same piece of fruit, obviously looks bad to one person but 7 out of 10 times it looks just fine to the other person in the marriage!

So, first it is much more accurate to talk about “one unhappy spouse” in a marriage than it is to talk about an “unhappy marriage.” This makes it easier to identify who is unhappy in the marriage relationship, discover the reasons for such unhappiness, and take steps for both marital partners to acknowledge and work toward resolution of such concerns.

Next question. What happens over time to persons who rate their marriage as unhappy or very unhappy? Remember, five years passed in this study between the first and second time this question was answered. 645 persons rated themselves as “unhappily married” the first time, and about 26% of those persons divorced in the next five years. What happened to the other 74%? Were they doomed to misery and unhappiness?

Apparently not. 86% of the individuals who stayed married in that five years and who had rated their marriage as “unhappy” the first time now rated it as “happy” the second time – and 60% as “very happy”! Even more interesting, 77% of the people who said they were “very unhappy” the first time rated the same marriage as “very happy” the second time around five years later. The researchers put this very simply: “Among those who rated their marriages as very unhappy, almost eight out of ten who avoided divorce were happily married five years later.”[3]

This fact suggests that not only is it most accurate to talk about unhappy spouses rather than unhappy marriages, but it is even more accurate to talk about unhappy spouses at a specific point in time in marriage. There are seasons in marriage. Some are wonderful and upbeat and positive, but others are confusing or depressing or difficult. I know about long seasons. I live in North Dakota. “Long winter” has a pretty strong meaning up here. For some persons at some times in a marriage, the marriage relationship has its “long winters.” But one or two long winters does not mean spring can never come.

For those individuals who felt they were unhappy in their marriage, typically, five years later they had become happy in the marriage. The long season had passed. What does this suggest? It suggests a powerful phenomenon that we might call the “marital turnaround,” in which a husband or wife or a couple who has faced a season of unhappiness or despair in the marriage relationship has found new hope and a new season of happiness. It suggests the possibility of healing. It suggests the promise of hope.

Toward Hope for Troubled Marriages

If you or someone you know has lived in a troubled marriage relationship, this pattern may or may not apply to you. But I hope it can. For a marriage to succeed, each companion in the marriage must exercise faith in the other person and in their future together. And yet faith cannot proceed without hope when times have been challenging. The Prophet Moroni instructively asks in Moroni 7:40: “How can ye attain unto faith, save ye shall have hope?”

And how can you have hope without the possibility of change if it is needed? This evidence suggests both the possibility and the reality of change in marriage. But hope is most certain when it is anchored in Christ, for He truly has the power to bring grace and change to a person’s life. His atonement is practical, for it is meant to help us all change from who we now are to who we might become in God’s image. He is come to change us. Remember Christ’s words:

The Spirit of the Lord God is upon me; because the Lord hath anointed me to preach good tidings unto the meek; he hath sent me to bind up the brokenhearted, to proclaim liberty to the captives, and the opening of the prison to them that are bound. . . To appoint unto them that mourn in Zion, to give unto them beauty for ashes, the oil of joy for mourning, the garment of praise for the spirit of heaviness. (Isaiah 61: 1, 3)

I will share more in the future, about what we are starting to learn about making changes in marriage. But in the meantime, I will be interviewing couples who have made such changes in a troubled marriage. I want to learn what they have to teach. If you have a story to share, let me know. Perhaps we could all learn from you.