Two Keys to Finding and Keeping a Mate | Meridian Magazine

Two Keys to Finding and Keeping a Mate 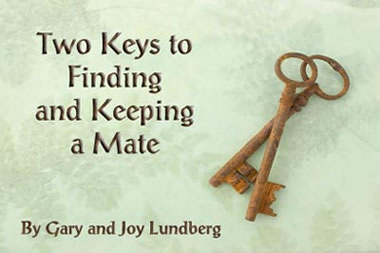 A few days ago a handsome young man, a recent BYU graduate, came to our home to visit and talk about his desire to find a wife.  He said, “What suggestions do you have for me?  I want to get married and I can’t seem to find the right girl. Or when I think I have found her it turns out that she seems to like me at first and then loses interest in me.”

We shared two concepts that seemed to hit him like a bolt of lightening and he said, “Wow! That’s profound. That’s my answer.”

The ideas are definitely profound, and we definitely are not the originators of them.  Most of us have heard them in one form or another from Church leaders and teachers for years, but somehow it had escaped this young man until we stated it succinctly just for him in a way that he seemed to grasp as though hearing it for the first time.  It reminds us of the scripture, “To all things there is a time and a season.”  It’s apparently his time for these concepts to take on meaning for him.

Because these ideas apply not only to finding a mate, but to keeping a mate and developing a happy marriage, we decided to share them in this Meridian article.

The first key is: We suggested he make a list of all the things he wants in a mate, then to put his name at the top of the list and make it his goal to be that kind of a person himself.  We told him that if he becomes that kind of a person he will automatically attract women with those same qualities which will allow him a chance to build a potential marriage relationship.

We took another step regarding his future family and said, “If you want a wife who wants children and wants to be a stay-at-home mother during their formative years, then you prepare yourself to be able to financially support your family so she can be a mother at home. And prepare yourself to be a good and loving father while you’re at it.”

Incidentally, if you are a woman with a similar goal regarding marriage and children, then we suggest you get an education and be intellectually attractive so you will attract a man who is likewise prepared. At the same time you will be preparing yourself to be a well-equipped mother and capable of financially caring for your family in case of unexpected illness, death, or other unforeseen tragedy.

This hearkens back to The Family: A Proclamation to the World, which states:

By divine design, fathers are to preside over their families in love and righteousness and are responsible to provide the necessities of life and protection for their families.  Mothers are primarily responsible for the nurture of their children. In these sacred responsibilities, fathers and mothers are obligated to help one another as equal partners.  Disability, death, or other circumstances may necessitate individual adaptation.

We went on to tell our young friend that if he wanted someone who will treat him with respect, then he must treat others with respect.  In short, any quality he desired in a mate, he must cultivate that quality in himself.  He will then become an attractive candidate to a woman with those same qualities.  You can be assured that anyone possessing those qualities will be looking for someone who likewise possesses them.

We must include a caveat here.  No one should expect a mate or potential mate to be perfect in all of these qualities, since no one is – but they must be on the path, quietly and obviously working to one day attain them in their fullness.

Elder Richard G. Scott said, “The pattern of the Lord is for His children to make decisions based upon eternal truth.  This requires that your life continue to be centered in the commandments of God.  Thus, decisions are made in accordance with unchanging truths, aided by prayer and the guidance of the Holy Ghost (“Living Right,” Ensign Jan. 2007, 13).

The application of this first key if you are already married is the same. Simply make a list of the qualities you want in your spouse; then put your name at the top of the list.  Examine yourself and see where you fall short, then make the change. Be sure to add, “Be forgiving.”

An associate of ours made an interesting observation about his spouse when he said, “My wife doesn’t get hysterical; she gets historical.”  Too many times a spouse will dredge up the past and throw it in the face of their mate.

That does nothing to foster change.  We must be forgiving, letting past sins and offenses stay in the past.  Start now by noticing and commenting on the good in your spouse, concentrating on being the best you can be regarding areas where he or she may fall short. Nothing is quite as powerful as a loving, non-criticizing example.

This reminds us of a client who was very distraught over the way her husband talked to her.  At times he would swear at her and call her insulting names. Interestingly, he expected her to crawl in bed with him at night and make love to him.  Now, after the way he treated her, how absurd is that!

Unfortunately, her response to him when he spoke to her in that manner was to yell back and call him her own insulting names. It was only when she responded to his insults with control, calmly stating that he must never speak to her that way again, that change began to happen. She kept at it, setting this boundary in a kind, gentle, respectful and firm manner, and then leaving the room afterward instead of being drawn into a high-pitched argument. She would then go about her household tasks and treat him normally and with respect.

It took a few weeks until her kind boundary took effect.  Now he treats her with respect, never swearing at or insulting her.

In fact, they have developed a deep and loving relationship – one she never thought possible.  It’s all about becoming who you want your spouse to be, along with setting a few boundaries.

Lloyd Newell on Music and Spoken Word summed it up recently when he said, “Think about what you want people to say about you at the end of your life, then live backwards.  Be that person now” (December 31, 2006).

The second key is this:  Open wide the playing field in order to allow the Lord to answer your prayers without restrictions.

In talking with our young friend, we found that he had indeed limited the Lord.  He wanted to marry an American Caucasian woman, even though he was from another culture.  In his mind he had made this decision, which greatly limited his possibilities of finding a woman who would be most compatible for him.  This is not to say that he won’t marry an American Caucasian woman, because he may, but his chances for marrying someone who is right for him are much greater if he opens the door to other possibilities.

Sometimes those who are seeking a mate seem to think there is that one and only person, a soul mate, created just for them, and the vision of finding that one person seems to rule.  President Spencer W. Kimball clarified that idea when he said, “Soul mates’ are fiction and an illusion; and while every young man and young woman will seek with all diligence and prayerfulness to find a mate with whom life can be most compatible and beautiful, yet it is certain that almost any good man and any good woman can have happiness and a successful marriage if both are willing to pay the price…” (Oneness in Marriage,” Ensign, Mar. 1977, 3).

It’s also wise to open the playing field by allowing friends and family to set you up with someone they think would be a good mate.  People sometimes resist this arrangement, and in so doing may miss out on a prize.

A relative of ours, who had had several unsuccessful “blind dates,” had decided to never have another one.  A friend prevailed upon him and he finally decided that he would give it one more try.  It worked and he found his wife. They have been happily married for several years. Keep the playing field open and you have a greater chance of finding your eternal companion.

We strongly suggest that people give that blind date more than one chance.  You can’t accomplished a whole lot of falling on love on just one date – usually.  So don’t’ give up too readily. A dear friend of ours is happily married to a man she just simply didn’t like at first.  He persisted, and she is so glad.  They have a very happy marriage and five adorable children.

We urge you to give the ones who possess your main qualities a chance. In dating don’t jump ship and leave the treasure behind before you’ve have a chance to discover its full value.

The Application to Those Already Married

So how does the second key work in marriage? The playing field you open is different than when you’re seeking a mate.  You’ve made your choice and you no longer look at anyone else with romantic intentions.  That field is closed.

What you now do is open a playing field where you both have room to grow and help your marriage become the best it can be.  An open playing field for married couples means having fun together, focusing on what each other enjoys, and making that happen – being open to new ideas, new opportunities, new places to live, new friends, new Church callings, new talents to be developed.  The list goes on.  It’s all about making the playing field an open one where you grow together as you share life’s joys and sorrows.

These two keys can be a valuable guide in finding and keeping a mate.  Whether married or looking for a mate it would be well to keep in mind these additional words of President Kimball:

Two individuals approaching the marriage altar must realize that to attain the happy marriage which they hope for they must know that marriage is not a legal coverall, but it means sacrifice, sharing, and even a reduction of some personal liberties.  It means long, hard economizing. It means children who bring with them financial burdens, service burdens, care and worry burdens; but also it means the deepest and sweetest emotions of all (Ensign, Mar. 1977, 4).

We hope our young friend and all couples will experience these “deepest and sweetest emotions of all.”

[To strengthen and help your marriage be better than ever, Gary and Joy Lundberg invite you to join them at their fun-filled Valentine Marriage Retreat.  For more information https://lundbergcompany.com/blog/seminars/marriage-retreat/  Or call 1/800/224-1606.]