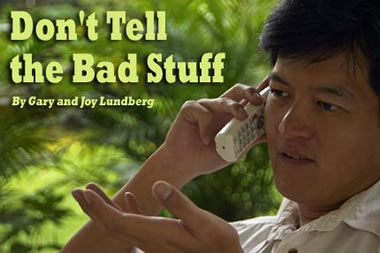 We could have titled this article Tell the Good Stuff , but in this case we want to drive a point home with a heavy hammer. Hold on with us and we’ll show you what we mean.

A friend of ours was feeling bad about a recent conversation she had with her daughter-in-law who lives three states away. She said, “Whenever I talk with her on the phone she lets loose with a litany of things that bug her about her husband, my son! Why does she do that? I’m his mother, for crying out loud! And it’s never even anything very serious. I’m trying to build a good relationship with her and this isn’t helping. It just makes me upset at her for not noticing the good things he does, which happen to include that he’s a hard working provider and he does a ton of fixing-up around their home, among other things. Why can’t she ever talk about that!”

The daughter-in-law is most likely telling her mother-in-law these things because she is hoping that she will intervene and “straighten him up.” Which begs the question, What grown up son is going to let his mother straighten him up? This daughter-in-law’s own mother passed away a few years ago so she doesn’t have her to tell the bad stuff to, which would make matters even worse if she did.

However, most mothers – and fathers, too – are still living and their daughters or sons too often unload the bad stuff about their husbands or wives on their parents. Even the simplest mind can figure out what will happen in that case. Parents are born with industrial size magnets on their hearts that go into full force when their child is born, and the magnets never stop trying to draw their children to them. It’s a power difficult to describe, but it’s there.

In other words, “nobody better mess with my little girl (or boy), especially her husband (or wife).” Parental loyalties in most cases will go to their own child.

A great deal of harm can be done when bad things are continually told about one’s mate to one’s parents, whether in-laws or your own. That’s all the parents will see, even if the deliverer of the negatives still loves his/her mate and finds many desirable things about him. The parents won’t know that side when criticism is all they hear. Thus, their judgment will be significantly impaired and poor counsel may be given.

In some cases we have seen parents become so upset at their child’s spouse because of all the unkind tales they’ve been told that they encourage separation or divorce – a tragic mistake.

Keep the bad stuff, which mostly falls in the category of annoying, to yourself. If it’s beyond annoying, then tell it to a bishop or a therapist where correct counsel and help is more likely to be given. A caution here, bishops and therapists need to hear both sides before making judgments. One side of a couple’s story is rarely sufficient.

[Of course, we’re not talking about physical abuse. If that’s happening, then tell authorities, tell parents, tell clergy. And get away from it. You must keep yourself safe.]

Another sad thing that happens in some families is the constant criticizing and bad-mouthing of one parent about the other parent to the children. Comments like, “Your dad is always late for dinner! I work hard fixing it and the least he could do is be on time.” Another one may be, “I’m sick of scrimping and counting every penny. Your mother just spends and spends and spend. We can’t even afford a decent vacation.”

If that’s what you’re thinking, then think it and work it out with your spouse, but don’t lay it on your kids.

Dumping on your kids will cause them to lose respect for the parent you are bad-mouthing and respect for you for railing against their mother or father.

These are mild comments compared to some of the deeply unkind complaints that parents sometimes dump on their kids. And it can get brutal when the parents are divorced. Let unkind remarks fly off your tongue and they will come back to bite you every time, no matter how true they may be. You don’t have to say the obvious; it can be seen. Kids aren’t stupid, but they are terribly impressionable and easily influenced by your bad behavior. Don’t lay more pain on them than they are already enduring. This kind of behavior is a type of child abuse.

What if your child is an adult? Is it okay then? No! You must always remember that you are the parent and no matter how close you are to your child, you’re not peers. You still cannot lay a burden of bad “daddy or mommy tales” on your child. It’s too troubling for a child to hear an overload of negatives about the other parent. After all, he or she is still the parent. Damage may be done that will be difficult to repair.

Here’s a rather extreme example of what we mean. Using your imagination, go with us to this hypothetical conversation – but not uncommon as we’ve observed with clients – between a disgruntled mother and her daughter.

“I wanted to have you alone, Carly, so we could talk. I’m so upset at your father. Ever since our separation I just keep finding out more and more slimy little tidbits about him. I am so hurt by what he has done to dishonor me and our family. Just when I was starting to think I might someday get over the terrible hurt of his affair, and maybe even forgive him, this happens. His little paramour’ calls the house asking if he’s there. Do you know what this is doing to me? I can just picture him kissing her, touching her. Can you even imagine the pictures that are going on in my head? It’s just awful.”

“Oh, Mom. I’m so sorry,” she said taking her mother’s hand and patting it like a mother would a child.

“This whole thing is such a mess. I just don’t know what I’m going to do. How could your father do this to me?” The tears started coming. “I was so stupid to believe him last year when he said he was working late. You just can’t believe men, Carly. He was messing around then and I didn’t even know it – climbing in bed with heaven only knows who. I just can’t take it.”

This type of dumping is not fair to the daughter for more reasons than one. Here’s the indirect effect this mother is about to have on her son-in-law. Let’s go to Carly’s house that night. They are in bed and Carly’s husband Nick starts to put his arm around her.

“Please. Men just have one thing on their minds, and you’re no exception,” she says, turning away from him.

As you can see, dumping on your child can have far reaching consequences that you may never even know about. Besides the heavy burden of knowing too much, in this case the mother set the stage for her daughter to doubt – even resent – her own husband. Parenta should never lay their problems on their children like that. It’s too heavy a burden. And it can take a terrible toll on the child’s marriage.

Sometimes parents do this even when their children are very young. They start using their young children as their confidants. This forces their children into the role of an adult long before they can handle it. It robs children of the opportunity of being children. No matter the age, do not turn your child into your therapist.

Sometimes you may feel like just letting it all out by crying on the shoulder of a friend. It’s important to have someone to talk to about problems you’re facing; however, in the process there are two things to keep in mind.

First, keep it general without hurting your mate or other family members who may be the subject of your wrath. Keep private things private. Don’t say what you wouldn’t want said about you. Second, very carefully choose who you seek out for this type of comforting ear. Know your friend well enough to know if she/he will keep a confidence. And don’t be telling personal problems to someone of the opposite sex. It creates inappropriate intimacy and can lead to disaster.

Some people tell anyone willing to listen. Acquaintances are not close friends you can confide in. Some find pleasure in broadcasting the bad stuff. Don’t do it. You’ll regret it many times over.

The most important person to talk to when you have a beef about something is the person you have the beef with. It can never be worked out if he doesn’t know how you’re feeling and what’s bothering you. Go to the source. Share and listen to each other. Then and only then can understanding and change take place. It you need a third party to assist then, as mentioned, go to your bishop or a therapist.

Tell It to the Lord

Which brings up our final point. Best of all, you can always take your problems to the ultimate source, your Father in Heaven. Pour your heart out to Him and be willing to listen. You can trust Him. He won’t tell anyone else and He won’t lead you astray. Remember this counsel in Psalms: “Cast thy burden upon the Lord, and he shall sustain thee:” (Psalms 55:22)

One more final thought – when you’re doing the telling, whether it be to the Lord or someone else, tell as much good stuff as you can about your mate or anyone else you care about and it will cause you to discover some very sweet things about that important person in your life. From there loving relationships will grow. Now we’re ready to end our article with the other title: Tell the Good Stuff .

[To strengthen and help your marriage be better than ever, Gary and Joy Lundberg invite you to join them at their fun-filled Valentine Marriage Retreat. Hurry while there is still space available. For more information https://lundbergcompany.com/blog/seminars/marriage-retreat/ Or call 1/800/224-1606.]