Supercharge Your Marriage with Hugs 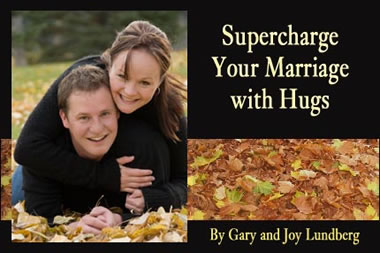 Through our many years of marriage, we have discovered an important truth: we can’t survive without our daily hugs. After a hard day of work, there is simply nothing that replaces a good long tender hug.

Something almost magical happens when couples hug each other. It’s as though an electrical charge passes from one to the other, giving a new feeling of strength and ability to face the tasks ahead. It’s the ultimate supercharge. And it doesn’t cost a penny. It doesn’t even take much time, but the benefits are enormous.

Hugs have a way of reconnecting our worlds. After a day of each having been involved in our own outside world, hugs bring us back into our family world together, united in our home. It helps melt away worries and stress and puts us in a safe and loving place.

Hugs the Kids Can See

And where should these hugs take place? Anywhere, but mostly at home in plain sight. Let your children see you hugging and kissing each other. Bill Keane, Family Circus cartoonist, illustrated it best when he showed the parents embracing and kissing each other as their little children looked on with delight. One of the children said to the others, “I feel all warm and happy inside when I see Mommy and Daddy kissing.”

Do it in front of the teenagers, too. They may groan and act embarrassed or disgusted, but we can guarantee that inside their heads and hearts they are receiving a powerful message. It’s a huge pronouncement that marriage is fun and happy, and that Mom and Dad really do love each other.

Teach them that husbands and wives hug and kiss. Children of all ages are desperate for that message. That goes for what they see their grandparents doing, too. They need to see you enjoying hugs from each other. It says that marriage is fun and loving at every stage of life. That it lasts. And that’s another message they’re yearning to see.

Private hugs are important, wherever you are. Sometimes when we’ve had an especially stressful assignment in our Church Service mission work, we’ve slipped quietly into a private hallway or empty room and just given each other a nourishing hug. Then we go quickly back to work with a little more energy than before. It’s quite amazing what that will do.

Of course, abundant hugs in the privacy of your bedroom are vital, too. We learned long ago that when we kneel by our bedside each night, take each other by the hand and say our prayer, then end that sacred time with a hug and kiss, something sweet happens. It’s like an exclamation point to the prayer. And it’s a witness to Heavenly Father that we are united and determined to keep our marriage strong and loving. Knowing how important marriage is to Him – that has to put a smile on His face.

Intimate hugging has an important place, too. In fact, it’s vital to the well being of a happy marriage relationship. President Spencer W. Kimball said, “Just as married partners are not for others they are for each other.” (Miracle of Forgiveness, p. 73) We need each other and the warmth of being together physically.

If you’ve had a “spirited discussion” and an “I’m sorry” is in order, be sure to accompany the apology with a hug. If you don’t feel like hugging, that’s probably when you, or your mate, need it most. It can dispel hard feelings and bring back a spirit of love.

Don’t turn away a hug. That’s like saying to the sun, “Don’t shine on me. I prefer a dark cloud over my head.” Accept hugs from your mate, and give them back freely. It has been said that the nicest thing about a hug is that you usually can’t give one without getting one. So respond. Don’t just stand there like a stiff pole. Hug back! When a hug is offered, it’s a gift of love. Don’t turn it away. That can be devastating to your mate and very unhealthy for your marriage.

Hugs have medicinal benefits – they contribute to healing. We need the strength received from one body to another. So don’t stop hugging just because one of you is ill, even seriously ill. If the one who is ill can’t handle a full body hug, then do it by touching, caressing, or massaging. The University of Texas MD Anderson Cancer Center reported the following:

Doctors are realizing that the simple act of touching can have a powerful effect on cancer patients – and may be a crucial part of the healing process.

“Studies have shown that light, gentle massage can help reduce nausea, pain, diarrhea and other side effects of cancer treatments,” says Cynthia Raman, a Houston massage therapist. “We also know that it stimulates the immune system, the gastrointestinal tract and improves circulation.”

Raman … says most of us don’t get nearly enough touching. “We as Americans are touch-deprived, and it takes some practice to incorporate it into our lives,” she says. “For cancer patients undergoing exhausting treatments, the natural reaction is to withdraw into themselves and reject touch, but that’s when they need it most.” (https://www.cancerwise.org/)

A dear friend who recently suffered a stroke said that hugs from her husband, several a day, have been vital to her recovery. It’s comforting and stress-relieving. And he is equally rewarded in the process.

“Everybody needs a hug. It changes your metabolism,” said Leo Buscaglia, Ph.D., who was affectionately called the Love Doctor. He continually taught about the power of a hug.

He told the story about a little four-year-old child who understood what love and physical touching can do. The child’s next door neighbor was an elderly gentleman who had recently lost his wife. Upon seeing the man cry, the little boy went into the old gentleman’s yard, climbed onto his lap, and just sat there. When his mother asked what he had said to the neighbor, the little boy said, “Nothing. I just helped him cry.”

Sometimes a crying mate is much the same. She or he (and yes, men have their moments, too) just needs to be hugged and helped to cry. The whole process is very healing.

Take away our hugs and we’re left defenseless in a world that is set on destroying marriages. It reminds us of our son who was serving in Iraq.

He had to wear a bulletproof vest at all times. On one occasion he was struck by a bullet that knocked him down but didn’t penetrate the vest. It saved his life.

Hugging is a little like bulletproofing your marriage. When you keep your relationship strong and hold on to each other, nothing can kill your marriage. You may get knocked down from time to time by the storms of life, but you’ll be able to get back up and continue on because you have a strong marriage relationship, one nurtured by daily hugs.

It seems a fitting close to quote a verse from Dean Walley’s poem Hugging. He hit the mark when he wrote:

The hug, there’s just no doubt about it –
We scarcely could survive without it!
A hug delights and warms and charms;
It must be why God gave us arms.

Begin today by giving each other hugs every day. Start in the morning before you go your separate ways, then greet each other with a warm and loving hug first thing when you get back together. After that, hug whenever you need it, and especially just before you go to sleep at night. In between all those marital hugs, give plenty to your kids. They’ll love it, too.

[Gary and Joy Lundberg invite you to enrich your marriage by attending their annual fun-filled overnight Marriage Retreat. For details: https://lundbergcompany.com/blog/seminars/marriage-retreat/]