Is Teenage Romance Harmless? Why do Adults Encourage It? | Meridian Magazine

Is Teenage Romance Harmless? Why do Adults Encourage It? 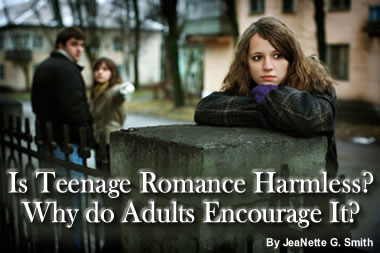 Teenage romance is touted on the movie screen, in romance novels, and on the radio. We see young couples in love and we often sigh, “Isn’t that sweet?” In fact, teenage romance, although it may epitomize unjaded affection, will usually prove more sour than sweet.

Prophets have long counseled teenagers to avoid steady dating, yet 1/3 of LDS high school students currently have a boyfriend or girlfriend. Walking through a high school corridor can feel a lot like running a gauntlet-trying to dodge the couples embracing or making out in alcoves. Yet rather than discouraging romantic relationships between teenagers, we adults may inadvertently encourage them. Our encouragement may be as innocent as asking, “Do you have a boyfriend?” or as explicit as lining up couples for a date to the senior prom.

We can hardly expect our teenagers to avoid romantic relationships when the adults in their lives think they’re so cute. One mother from Maryland said when her son was in high school, women in her ward frequently approached her, “Don’t you think our kids would be good together?” A mother from a small town in Utah said the stake president dropped his daughter off at her house at 10:00 one night after returning from vacation, because the young lady couldn’t go another minute without seeing her son.

Parents have a tremendous ability to influence their children to abstain from romantic relationships while still in adolescence, if they first, believe in the prophets’ counsel themselves. Gordon B. Hinckley said, “When you are young, do not get involved in steady dating. When you reach an age where you think of marriage, then is the time to become so involved. But you boys who are in high school don’t need this, and neither do the girls.” (Nov 1997 Ensign, priesthood session of General Conference)

In addition, adolescents are far less needy of parental approval when they feel they have a boyfriend or girlfriend who so wholeheartedly approves of them.

“It is better, my friends, to date a variety of companions until you are ready to marry. Have a wonderful time, but stay away from familiarity…..(Gordon B. Hinckley Ensign, Jan 2001 p. 2)

Casually dating a variety of companions is way more fun for teens then dating the same guy or girl their whole high school career. When I was young, I attended hockey games with one of my male friends. I attended jazz concerts with another, learned to drive a stick shift from another, went hang gliding with another, flew in a private plane with another, went hiking in the mountains with another, learned the history of world religions from another, attended my first wrestling meet, went water skiing, snow skiing, ice skating, scuba diving, camping, played rugby, learned photography, and mountain biking. I would have never had so many learning opportunities had I stayed in a single relationship.

One magazine once ran an article called, “Guys are like electives: You’ve got to take a bunch before you decide to commit to a major!”

Casually dating lots of people helps adolescents better choose someone to date seriously. Casually dating allows young people to discover traits they admire, and what traits they can’t tolerate. It helps them discover what traits they, themselves, possess that people admire, and which ones people can’t tolerate. Friendship with a variety of members of the opposite sex protects young people from making a poor marital choice.

Rushing into a serious relationship, without spending sufficient time in casual relationships is like taking a final exam without doing any homework. It leads to failure.

Dennie Hughes, the author of the book Dateworthy says, “The more people you date, the easier it is to keep from getting too involved too soon with the wrong person….. Anyone who expects you to commit in the early stages of dating is a red-flag personality.” (Rodale Press, 2004)

High school students need a variety of experiences that can only be found outside of a steady-dating relationship. Teens who go steady don’t have the freedom to make friends with a variety of members of the opposite sex either because the “steady” will get jealous or because they are always with their “steady.”

Breaking Up is Hard To Do

Breakups among adolescents are as predictable as the seasons. In previous generations steady dating in high school led to marriage because of all girls married while in their teens. In this generation, the average age for a young woman to marry is 25 years old. Steady dating and falling in love is perfectly appropriate when marriage is an imminent possibility. Pairing off when marriage isn’t likely for 9 more years will surely result in a break up.

Breakups are far from easy for high school students. One young lady began her first love affair at age 14, before she was technically old enough to “date.” She met a boy on the Internet who was 15 years old and they communicated constantly. They decided they were destined to be together and committed their undying love to one another. Disaster struck when this young boy turned 16 and felt free to go on real dates. He broke up with his Internet lover and left her devastated. She cried constantly, stopped eating, went to the doctor and was eventually diagnosed with anorexia. Clearly, young people have an amazing ability to love. But they don’t have much of an ability to love faithfully.

Breakups, such as the one described, can result in mild depression, where the teenager holes himself up in his room for a few days and mourns. Or the consequences of a break up can be moderate, wherein a jilted lover may blow his grades for a semester, or get arrested for keying his ex’s car. The consequences of a break up can also be quite severe, such as the girl from my son’s junior class who jumped off a building in downtown Jacksonville .

Regardless of the level of hurt a breakup produces, mild, moderate or severe, breakups in high school are entirely unnecessary.

High school students shouldn’t even be glued together in the first place, so there should be nothing to break. Granted breakups are a part of life, but they are far less likely when a couple is emotionally mature and when marriage is a realistic possibility.

The human heart is extremely resilient, but it still has its limits. It can only get broken so many times before it is unable to mend. Teenagers who enter one painful relationship after another eventually lose their ability to trust. Although breakups are often necessary before finding the relationship that leads to marriage, it is wasteful to enter a relationship knowing full well that it will eventually break up.

Adolescent learn lousy relationship lessons when they go steady, not only because their relationships end in breakups, but because few adolescents possess the maturity necessary to be in a serious relationship. Adolescents are at a developmental stage where they are generally selfish, impulsive, fickle, and idealistic-the opposite traits that lead to successful marriages. Teenagers who learn about intimate relationships from partners, who treat them poorly, may be slow to trust their eventual marriage partners. Rotten romances leave scars.

Perhaps the LDS youth may choose to go steady because they have not been taught correct principles, or alternately, they may choose to go steady because parents teach correct principles but are overwhelmed with the difficulty of enforcing them. Steady dating in high school is such an inherent part of our culture, we might wonder if we can ever eradicate it. Young people can hardly wait until they turn 16 so they can have a boyfriend or a girlfriend. Homecoming dances, Sadie Hawkins, Prom, are all designed for high school students to pair off, (to “hook up” in the students’ vernacular). High school romance is as deep-rooted in our culture as the Palmetto plants in my Florida back yard.

The traditions of our fathers, just because they are deep-rooted, however, doesn’t mean they are healthy. Our task is to improve on each generation, to make this generation better than the last. Traditions that may have worked in generations past, do not fit in the new millennium. Perhaps this generation can create some new traditions.

Thankyou! Highly refreshing to read your excellent reasons to follow prophetic counsel in this area. Sadly, too many folks in the church (young and old) take this counsel lightly, even though it's all right there in For the Strength of Youth. If PARENTS (and seminary teachers and ym/yw leaders and bishoprics) would use lesson times to emphasize proper dating attitudes, rather than tirelessly beating to death the "don'ts" of the Word of Wisdom, I think we'd see a positive cultural shift.

This article is so right on! As I read it, I could feel my teenage self rolling my eyes, but now at forty, well, you know hindsight... I met my first boyfriend at fifteen, married him at seventeen ( I wasn't pregnant, just stupid), and we divorced two years later. That relationship ruined me in so many ways! Thank you for the insight that I can hopefully teach my own teenagers.