Can Help Falling in Love 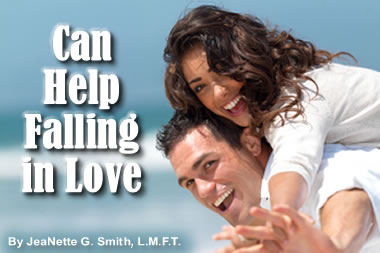 Can you imagine yourself standing in the moonlight, face to face with the man of your dreams, staring into his eyes and he whispers in your ear, “I’ve decided to love you.”

What??? Stop the music. How romantic is that? You want him to say, “I’m smitten, head over heels, and hopeless, helplessly in love with you.” Now that’s romance–out of control, the heart comes before the head, the “I can’t survive without you” kind of romance. You can be certain true love exists when there’s no way for him to avoid his feelings, can’t you?

Actually, no. As flattering as it might feel to have somebody become helpless on your account, to have all reason leave their brain because of your charm, that’s not what love is made of. True love is not accidental. Love doesn’t happen because cupid hits you with his arrow. Love occurs because we let it. Love happens deliberately. Love occurs because we choose to love.

The misnomer that love just happens, inexorably, inevitably, unavoidably, while alluring and flattering to the object of that sentiment, isn’t at all practical in real life. Man is given agency over his behavior as well as his emotions. His agency isn’t whisked away when it comes to love. Man must have control over his emotions, as well as his behavior, or our world would be in chaos.

The sentiment, “I’ve chosen to love you,” might not make your heart leap when first whispered in your ear, however, such deliberate decision-making, when it comes to love, ought to provide a measure of comfort. The man who deliberately chooses to love is in control of his own feelings, and not at the mercy of a whim, or a passing fantasy. How much more assured you can be that this calculated emotion will last beyond emotions that are ephemeral. You don’t need to worry that he will one day “fall in love” with someone else, claiming he couldn’t control himself

People who claim that they couldn’t help themselves–that they fell in love without even knowing what was happening–when they pause to think about their experience, recognize that they had every choice in the matter. They admit that “falling in love” is actually a process-a 5 step process, I’ve discovered-that would more accurately be labeled, the “decision to love.” These 5 steps are 1) longing, 2) looking, 3) flirting, 4) exclusivity and 5) focus–and we have agency over every step in the process.

5 Steps to “Falling in Love”

The choice to love begins with Step 1, a desire to be in a romantic relationship. Teenagers who “fall in love” actually begin longing for love well before they find it. You can hardly blame them. The love songs on the radio, and the prevalence of romance movies in the theatre make any listener believe that there is only one purpose in life: to find love. Practically every song you hear (even on the non-country stations) drones on about looking for love, being in love, or loosing a love. You would think human beings have nothing else to live for.

I am as big a sucker for a romantic movie as the next woman, but the fantasy that plays out on the big screen must be tempered with a healthy appreciation for reality. Women (and men alike) who think life is always like the movies will be sorely disappointed in their real life relationships. A writer for the Ensign magazine recognized her passion for romance novels almost led her to engage in an extramarital affair. “The world teaches-through romance novels, television programs, and movies-that a person in my situation can act on any romantic feelings regardless of the consequences.” (Ensign July, 2004) Clearly, the media can be dangerous, even if it’s not full of explicit sex. It can be dangerous because it is full of romantic notions.

Looking for love is the next step. This is the step where you begin to compare what’s available with what you want. A teenager might judge potential lovers with a different set of criteria than adults. Teenagers might look around and say to themselves, “Oh, she’s too tall,” or “He’s a nerd,” or they will frequently pare down their list of potential lovers by considering the size of his biceps or her bust.

Adults, to their credit, look for love with a little more maturity. Adults may ask themselves if the object of their affection is kind or patient, or, helpful, or a good listener, or accepting. Adults who assess what’s available may look for character traits instead of (or at least in addition to) physical traits.

The step after longing and looking is flirting. This step might also be called “flirting with danger,” if a married person reaches this step, or a teenager in no position to get serious reaches this step. Flirting is a person’s attempt to get the object of her affection to notice her. She might invite his notice through her physical presence, always hanging around his locker, his desk, or his office. She might invite his notice through her dress, through long stares, through special attention to his comments, or his accomplishments. Flirting is an ancient art, and is as easy to spot as black ink on a white shirt.

If her flirting produces results, the object of her affection will return her affection and they will become a couple. This step of exclusivity needs to occur before love will truly flourish. Research has shown that human beings are created to be romantically involved with one person at a time. Therefore, before humans will allow themselves to be romantic with another human being, they want to be assured that they are the “only one.” Or as the song says, “I only have eyes for you.” Girls will hold back their affection if they think the object of their affection isn’t going to be loyal to them. When they get a little bit of assurance that he has chosen to be faithful to them, they pour on the lovin’.

The last step to a love affair is focusing on the good and ignoring the bad. Young lovers have mastered this step. You may have heard the saying, “before marriage your beloved can do no wrong, and after marriage he can do no right.” There is truth to this old adage. Couples in love are susceptible to the “pink lens effect,” where they see everything through rose colored glasses. It’s easy to ignore faults at this point in a relationship, and love will flourish, under these merciful conditions. (This is a state married couples will want to re-capture if they are choosing to keep their love alive.)

Stopping at Any Step along the Way

Married people, or teenagers who are too young to get serious, can avoid romantic love by refusing to participate in any of the steps that lead to romantic love.

Teenagers who are years away from marriage have no business daydreaming about being in love. Likewise, married adults need to keep their thoughts pure. They don’t want to ever fantasize, “Oh, it would be nice to have a husband who was more romantic.”

Our thoughts precede our deeds, always. We might not be aware of the thoughts that preceded our deeds, but if we can slow our thoughts down, we can pin point the moment when we started fantasizing, daydreaming, wishing we had something we haven’t got. At this moment we can decide whom we will or won’t love by controlling the longing.

Those who want to control with whom and when they love can put on the breaks at any step along the path to romantic love. They not only avoid longing; they avoid looking. If you don’t want to be in love, stop checking people out, don’t scour online matchmaking sites.

Young people, and adults alike, who find themselves heading towards a love affair they have no business experiencing will want to put on the breaks the instant they recognize the path they are on. Even if they have slipped past the first or second step toward finding romance, they can come to a dead stop in the third step. They can stop flirting, stop hanging around the object of their affection, stop doing special things for him, that they wouldn’t normally do for others.

Teens can stop a romance at stage four by refusing to enter into an exclusive relationship. Going on casual dates with a number of people is a guaranteed way to slow down a relationship and keep the love at a platonic level.

It’s difficult to imagine how a married adult could ever reach step four with a potential affair partner. Nevertheless, this happens if the married couple is emotionally estranged, when they don’t share their feelings with one another, when they aren’t close anymore. Then the exclusive relationship, the place where the romantic feelings flourish, is with the affair partner, not the spouse.

Step five of a romance is a helpful step to be aware of because couples who want to get out a romantic relationship they have no business being in will have an easier time doing so when they can look at their beloved realistically, without the rose-colored glasses. An objective view of one’s beloved, a view that acknowledges all the faults, and character flaws, and slights, and selfish behaviors will put the brakes on an ill-timed love affair.

These same five steps to finding romantic love, longing, looking, flirting, exclusivity and focus, while a warning to teenagers or married folks who want to avoid an affair, can prove tremendously helpful to eligible singles, who are old enough to marry, and married couples who want to re-capture the romance in their relationship. If you are in a position to marry, then by all means, start daydreaming, start looking, start flirting, become exclusive, and then for heaven sakes, focus only on your lover’s strengths not his faults.

Forgive me if I have taken all the mystery out of romantic love, for popping a bubble that’s filled with daydreams. Perhaps you’ll now roll your eyes when you listen to love songs on the radio, or when you are cuddled up in front of a romantic movie, knowing that the couple you are watching is creating the romance, not mysteriously stumbling across the romance. As disappointing as it might be to discover that their romantic love does not occur magically, but deliberately, it should be equally reassuring that we can corral this wild emotion. A deliberate, informed attempt to seek romantic love can protect our youth from ill-timed love affairs, and help adults in legitimate relationships create a love that is more fulfilling, and forever lasting.