Arguing for the Divinity of Jesus | Meridian Magazine 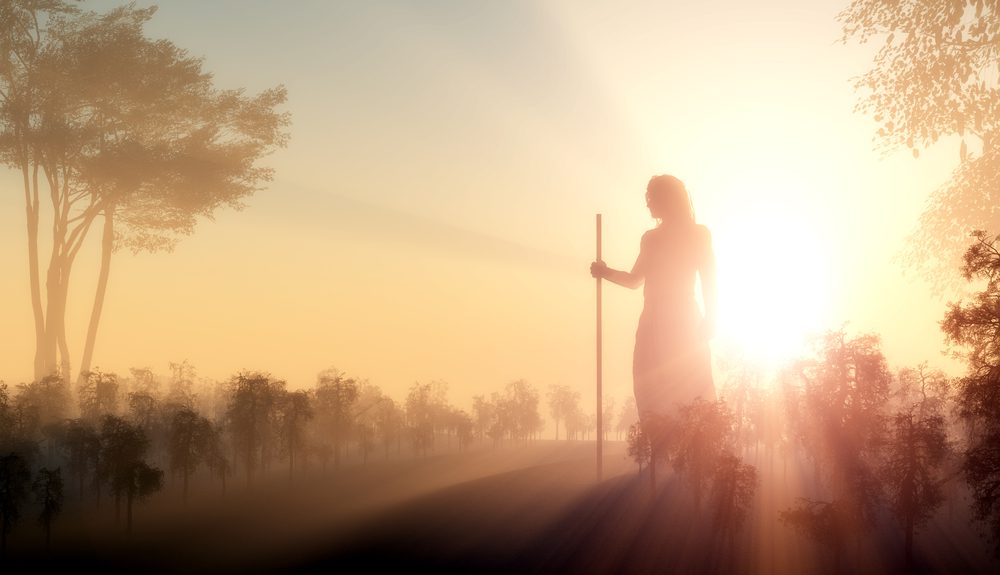 Arguing for the Divinity of Jesus

One of the most famous arguments for the divinity of Christ was expressed by the brilliant C. S. Lewis. (Incidentally, his own journey of faith was recently depicted on film in “The Most Reluctant Convert: The Untold Story of C. S. Lewis,” which I enthusiastically recommend, although it can never replace his books.)  Although Lewis wasn’t the first to make the argument, his 1952 formulation of it in Book II, Chapter 3, of “Mere Christianity” has become a classic:

“I am trying here to prevent anyone saying the really foolish thing that people often say about Him: I’m ready to accept Jesus as a great moral teacher, but I don’t accept his claim to be God. That is the one thing we must not say. A man who was merely a man and said the sort of things Jesus said would not be a great moral teacher. He would either be a lunatic—on the level with the man who says he is a poached egg—or else he would be the Devil of Hell. You must make your choice. Either this man was, and is, the Son of God, or else a madman or something worse. You can shut him up for a fool, you can spit at him and kill him as a demon or you can fall at his feet and call him Lord and God, but let us not come with any patronizing nonsense about his being a great human teacher. He has not left that open to us. He did not intend to. . . .  Now it seems to me obvious that He was neither a lunatic nor a fiend: and consequently, however strange or terrifying or unlikely it may seem, I have to accept the view that He was and is God.”

However, the argument has been heavily criticized and often dismissed because it presumes that Jesus really said the things about himself that are recorded in the New Testament.  But many scholars today discount the accuracy of the New Testament Gospels.  And it’s been commonly argued since fairly early in the nineteenth century that Christian belief in the deity of Jesus grew only gradually, after his death, and perhaps even because of pagan converts who were more comfortable (it is said) than any Jew would have been with the concept of demigods and semi-divine humans.  In other words, they say, Lewis’s trilemma of lunatic, liar, or lord needs to be expanded to include a fourth alternative: “legend.”  And, of course, acceptance of that fourth option would fatally weaken the argument that Lewis made.

Please bracket that thought, though, while I introduce something that I recently read and that I commend to your attention.  Don’t worry.  I’ll return to C. S. Lewis’s famous argument before I’m done.

A few years ago, Brant Pitre, an American Catholic scholar who holds a doctorate in New Testament studies from the University of Notre Dame, published a book titled “The Case for Jesus: The Biblical and Historical Evidence for Christ” (New York: Image, 2016).  In it, he takes direct aim at some of the most widely held assumptions in New Testament studies—assumptions that have seeped down to the popular level and likely undermined the faith of more than a few Christian believers.  They are exactly the assumptions that tend to weaken Lewis’s trilemma.

Let me summarize a few of his central points, which he makes quite clearly and readably:

For centuries, the overwhelming majority of Christians who have given the matter any thought have assumed that the four New Testament Gospels were written by the very men whose names they bear: the evangelists Matthew, Mark, Luke, and John.  And most ordinary Christians probably still believe that.  In recent generations, though, scholars have argued that, in fact, none of the Gospels was written by its claimed author, but that each is instead the product of a more or less folkloric process of passing stories along, somewhat in the manner of the party game known as “Telephone,” until each was written down by an anonymous individual or group of individuals.  So the problem is to determine what, if anything, in the stories told about Jesus is actually true.

Brant Pitre points out, though, that there is precisely no actual manuscript evidence to suggest that the Gospels were written anonymously, or that they ever circulated anonymously.  To the contrary, the names of Matthew, Mark, Luke, and John are attached to the very oldest manuscripts that we have, and those names are never mixed up or confused.  Moreover, the most ancient extrabiblical witnesses, from all across the ancient Mediterranean world, all agree on those names and on which Gospel belongs to which writer.  If the attribution of the Gospels to those four specific authors is false, it’s difficult to explain how it traveled to the far-flung reaches of Christendom so very early, and why no rival identifications—none—seem to exist.

Some might respond at this point that there are other ancient texts bearing the names of apostles and other prominent and very early Christians.  These include such documents as the famous “Gospel of Thomas,” as well as the “Protevangelium of James” and Gospels attributed to Philip, to Mary, and even to Judas.  So why haven’t they been broadly accepted as authoritative?  Pitre lays out the distinctly different treatment of such writings by ancient Christians authors, illustrating why they don’t—and shouldn’t—enjoy the same status as canonical Matthew, Mark, Luke, and John.

Pitre also takes aim at the assumption that the four Gospels were written comparatively late—entailing that their authors not only weren’t eyewitnesses to the life of Jesus (as is claimed in the cases of Matthew and John) but probably never even so much as met an eyewitness (which would weaken the authority of Mark and Luke).  To the contrary, Pitre argues for quite early dates, which would tend to increase the authority of their accounts of Jesus’s life, words, and acts.

Many have argued that the New Testament Gospels were never really intended to be genuine “biographies” anyway, because their writers weren’t particularly concerned with accuracy or with literal history.  Early Christians supposedly didn’t worry about such things.  Pitre contends otherwise, observing that the Gospels match the secular historical standards of their time and that they were, therefore, almost certainly intended to tell their story as it actually happened.  If he is right, obviously, and if the accounts were written fairly soon after the life of Jesus by authors who either interviewed eyewitnesses or were themselves eyewitnesses to it, that should strengthen readers’ confidence in the story that the Gospels tell.

And what story, exactly, do the Gospels tell?  Do they even depict a Jesus who really claimed to be divine?

Many who have written about the New Testament have admitted that the Gospel of John, which is generally reckoned to be the latest of the four, does seem to depict Jesus as divine.  (The opening verses of John 1 are difficult to ignore.)  It’s part, they say, of the evolution of that idea among some believers after Christ’s death.  But John is very distinct from Matthew, Mark, and Luke.  In fact, the latter three are commonly known as the “Synoptic Gospels” because they’re so similar.  (Think of the word “synopsis,” which comes from a Greek term meaning “seeing together.”)  And John is commonly dismissed as the least “historical” of the four.

Again, though, Brant Pitre argues that what Jesus said and did, even according to the Synoptics, clearly indicates for those with eyes to see that he was asserting a claim to divinity.  Many have failed to notice that fact, Pitre says, because they expect Jesus to flatly declare “I am God.”  And, plainly, Jesus is never represented as saying anything so obvious.  But, Pitre contends, if we read even Matthew, Mark, and Luke through ancient Jewish eyes, which means to see everything through the lens of the Hebrew Bible or Old Testament, we will recognize beyond reasonable dispute that Jesus obliquely but continually identified himself with the God of Israel and literally and consciously fulfilled ancient Jewish prophecies.  (Pitre devotes special attention to such passages as Psalm 22 and the book of Daniel, and his reading of these as messianic prophecies is quite convincing.)  It was Jesus’s claim to divinity, Pitre, says—not his prophecy about the pending destruction of the temple, let alone any revolutionary threat that he might have posed to Roman rule or to the Sanhedrin—that led to his crucifixion.

And what about the empty tomb?  Pitre rejects attempts to explain it away as mere metaphor.  In support of his position, he cites the eyewitness accounts of Christ’s resurrection as well as related arguments, which have been given more extended treatment by such other scholars as Gary Habermas and N. T. Wright (to name just two of them).  Once again, though, he calls upon Old Testament prophecy—especially, this time, in the book of Jonah—to make his case.  And he does so in a fresh way that, I think, many of his readers will appreciate.

Finally, Pitre closes “The Case for Jesus” with a chapter called “At Caesarea Philipi,” referring to the place where, responding to Jesus’s question about who he, the Son of Man, really was, “Simon Peter answered and said, Thou art the Christ, the Son of the living God.  And Jesus answered and said unto him, Blessed art thou, Simon Barjona: for flesh and blood hath not revealed it unto thee, but my Father which is in heaven” (Matthew 16:16-17).

Latter-day Saints will resonate with Pitre’s conclusion that faith can only come by means of a spiritual witness, and not by mere argument (“flesh and blood”) alone.  Still, though, Brant Pitre has provided us with a very powerful argument.  In his own summarizing words,

“Likewise, in order to hang on to the theory that Jesus never claimed to be divine, you have to eliminate the entire Gospel of John and what it tells us about who Jesus claimed to be; eliminate the passages in the Synoptic Gospels in which Jesus takes the divine name “I am” and speaks as if he is the divine Son of Man; eliminate all the miracles in which Jesus does what only the God of the Old Testament can do; and eliminate all the evidence that Jesus was both repeatedly accused of blasphemy and condemned to death for blasphemy because of who he claimed to be.  (And that is to say nothing of eliminating the evidence that Jesus’s tomb was actually empty, that he actually appeared to his disciples after the resurrection, and that he fulfilled biblical prophecies about the coming of the Messiah, the kingdom of God, and the conversion of the Gentile nations.)  In other words, in order for the theory that Jesus never claimed to be God to be correct, you have to keep eliminating all of the evidence that doesn’t fit the theory. . . .

“Which means, of course, that we are thrown back onto the horns of C. S. Lewis’s trilemma.  His basic point was right.”

Here's two more witnesses: Paul (See I Corinthians 15 as he lists several others bedides himself) Joseph Smith's account of the First Vision

Although I enjoyed discussion like this, and it is important all the data shown, to tell us if the Jesus of Nazareth is the Christ, what anybody really wanting to know it, just follow the admonition from James: "If any of you lack wisdom, let him ask God, that giveth to all men liberally, and upbraideth not; and it shall be given him. But let him ask in faith, nothing wavering. For he that wavereth is like a wave of the sea driven with the wind and tossed."