Are You Part of Today’s Counterculture?  | Meridian Magazine 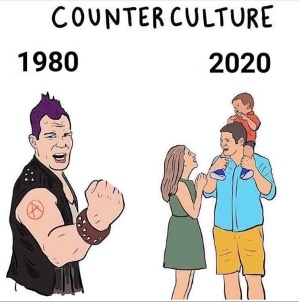 As individuals, we must advocate for today’s counterculture by forming our own strong, intact families, teaching our children the moral principles found in our religion, and having a voice in our communities.

The counterculture of my childhood is embodied by Olivia Newton John in the movie Grease. Remember the iconic scene when she discards her “good girl” image for a skin-tight leather bodysuit, black high heels, a cigarette and bedroom eyes? “Goodbye to Sandra Dee,” she laments shortly before her transformation. Her message is clear: It’s no fun to be a virtuous “Sandra Dee”.

The Sexual Revolution has claimed for decades that you should have unrestricted moral choices, particularly in regard to sexuality. This ideology has taken hold of our society so effectively that the counterculture of my youth is now the mainstream culture of today. Marriage has been redefined and is waning, cohabitation, divorce and single-motherhood have skyrocketed, the killing of millions of innocent children is labeled as “women’s healthcare”, many countries are below replacement level, religious belief and morality are at all-time lows, and the list of reverses goes on.

Coupled with the privileges of affluence found in the First World, this new culture has created an identity crisis in today’s Generations Y and Z. Those of us from older generations must help them realign their core identity by advocating for today’s counterculture of marriage, family and religious/moral uprightness.

The Marriage Divide and Success Sequence

According to the Institute for Family Studies (IFS), “In 1970, there was virtually no marriage divide in America. Whether rich or poor, middle class or working class, a clear majority of men and women were stably married.”

But that doesn’t seem to be the case anymore. Today there is a “…growing marriage divide that separates Americans by class and education….What is especially striking about this divide is that it was basically nonexistent in the 1970s.”

The Brookings Institute claims this phenomenon is due to “…a shifting kaleidoscope of social, cultural and economic factors.”

The prevailing social and cultural ideology insists that marriage is unnecessary to achieve success and happiness, and even harmful because it marginalizes those who do not participate in it. This ideology has had a huge effect on how people value marriage, especially amongst lower income classes, with rates in America dropping to historic lows since 2018.

What role does marriage actually play on the road to success? As it happens, a big one!

Researchers have also determined that there is a simple and effective formula for avoiding poverty if you live in the First World:

This formula is called the Success Sequence, and it applies across racial and economic backgrounds. In an article titled, Straight Talk about the Success Sequence, Marriage and Poverty, Brad Wilcox notes that “…today social structural factors do not exclude young men and women from low-income families, nor African American and Hispanic young adults, from following the success sequence…even for these young adults from less-advantaged backgrounds, following the sequence dramatically reduces their odds of being poor as they move into their late twenties and thirties.”

Communities that foster the Success Sequence are even more likely to see higher rates of upward economic mobility for their low income families. Wilcox continues his observation, “It’s no accident, for instance, that children raised in lower-income families from Utah have markedly higher rates of economic mobility than children raised in lower-income families in most other states, or that children raised by poor Chinese immigrants from Brooklyn are much more likely than other poor children in New York City to get into the city’s elite public high schools, positioning them to move into the middle class or higher as adults.”

The Effect of Marriage on Society

Marriage is not only beneficial to individuals, it’s the foundational unit of society. The increasing violence of today showcases a major reason marriages with intact families are so vital to our communities. According to The Heritage Foundation, “There is a strong and disturbing pattern evident in scholarly studies: the link between illegitimacy and violent crime and between the lack of parental attachment and violent crime.”

Of the recent Uvalde school shooting, Texas governor Greg Abbott mentioned that 18-year-olds have been able to buy rifles in Texas for more than 60 years. He then asked: “Why is it that the majority of those 60 years we did not have school shootings and we do now? The reality is I do not know the answer to that question.”

Abbott might not be willing to acknowledge the truth, but in an article from The Federalist, John Daniel Davidson boldly proclaims, “A broken home, no father or father figure in his life, no church or community of any kind, no real friends except those he met through social media. Here we have, in brief sketch, not just a profile of a school shooter, but an indictment of our entire culture.”

Not only is the erosion of the nuclear family a culprit in our increasingly violent society, so too is the waning influence of religion in people’s lives. Life Site News recently reported: “Among young adults, in particular, regular church attendance has plummeted from 70 percent in the 1950s to somewhere around 37 percent now (on a good weekend). Factor in the pandemic lockdowns that helped to undermine the devotional habits of those who had been attending religious services, and there’s no mystery why very few in this age group are hearing the Word of God on a regular basis.”

Another headline also reveals that the number of Americans who believe in God has dropped to an all-time low. For those of us who still believe in Him (whether we are Christian, Jewish, Muslim, or other), religion plays a crucial role in shaping our moral standards. God is the arbiter of truth, not individuals, society/social media or government officials. We believe that if society’s foundation is built upon God as our higher power, it can operate successfully because it acknowledges the reality of His right and wrong.

Unfortunately in today’s culture, this belief has taken a back seat to one that says truth is merely relative. If you feel something, then it’s right. If it hurts your feelings, then it’s wrong. Watch PragerU’s short video, What is Truth, to learn more about this prevailing ideology.

Constitutional Republics like America’s cannot function without the higher moral standards and identity that religion brings us. As John Adams said, “Our Constitution was made only for a moral and religious people. It is wholly inadequate to the government of any other.”

How Can We Be Part of Today’s Counterculture?

There are organizations and individuals that, along with United Families International, are prescribing a return to strong marriages, families and morality. Some like IFS have ideas on how the government can step up to help. While there is certainly a place for governments to support our families through policy, it cannot be the only or major source we look to. Federal programs only do so much, and sometimes even hurt families more than they help them (read the article, How Tangled Welfare Programs Create a Marriage Penalty for the Near-Poor). This was something I observed personally when someone close to me became pregnant out of wedlock years ago. The state she was living in would pay for all of her pregnancy and birth-associated costs as long as she remained unmarried. If she decided to marry the father of her baby, the state wouldn’t cover her expenses. You can imagine what she chose to do.

As individuals, we can be part of today’s counterculture by forming our own strong, intact families, teaching our children and extended family the moral principles found in our religion, and having a voice in our communities. If you are looking for a way to study current issues impacting the family in a fun way, we invite you to join with friends and family in your home (or via video conferencing) with UFI’s new bookclub type program – the Homefront Project. We suggest these topics be studied in the order listed, as their understandings build upon each other. You can also teach these issues to your children by using our HomeFront Kids Program. This program mirrors our HomeFront Project, but has activities, articles, videos and questions in each area to help you discuss these difficult topics with your children and arm them with tools to withstand the messages of society today.

When we live and champion what we believe, our actions and voices will work to heal our current culture and younger generations from the inside out. As Michelle Malkin has said, “What you permit, you promote.  What you allow, you encourage.  What you condone, you own. What you tolerate, you deserve.” Today’s culture is loud and unfortunately very impactful on our children and grandchildren. If we are not willing to combat those voices with our own, the culture and values we grew up with will continue to disappear from our society, and we will have allowed it to happen with our silence.

Amen! Thank you for your courage to be bold. There is a difference in loving one another and sanctioning, encouraging, celebrating evil influences and lifestyles. I am thankful for all willing to publicly easily identify the real & true root causes of society's problems...Come Lord JESUS, come!