Are the Accounts of the Golden Plates Believable? | Meridian Magazine 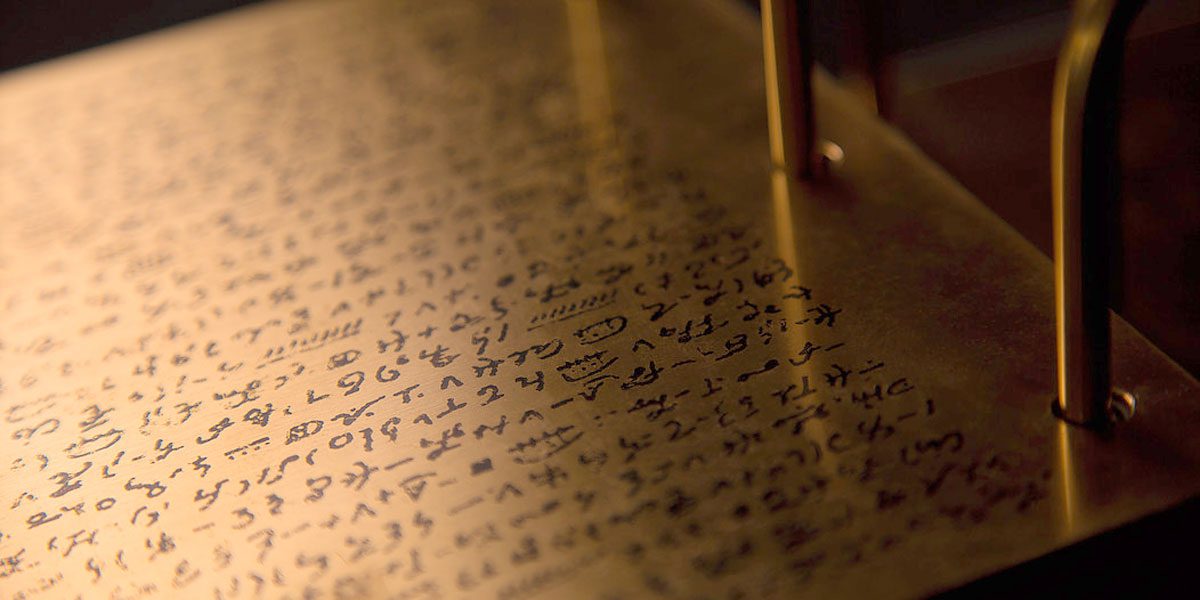 Are the Accounts of the Golden Plates Believable?

“Joseph Smith, Jun., the translator of this work, has shown unto us the plates of which hath been spoken, which have the appearance of gold”
Testimony of the Eight Witnesses

Nearly two dozen individuals had some sort of sensory encounter with the golden plates that Joseph Smith discovered on a hill near his farm.[1] The full weight of these combined reports is certainly impressive. Yet, some may wonder what other kinds of evidence, aside from these witnesses, can help verify the reality and authenticity of the ancient artifact in the prophet’s possession.

Joseph said that an angel, who had custody of the plates, directed him to a hill where they were preserved in a stone box,[2] along with other Nephite relics.[3] Sacred records in sealed caches guarded by divine beings may seem a bit fantastic to modern societies, but there are a large number of precedents from the ancient world.[4]

The Ark of the Covenant, for instance, was a box-like structure, symbolically guarded by angelic beings,[5] which contained, among other sacred artifacts, an engraved religious document written on non-perishable material.[6] Metal documents, including those made of gold and gold-alloys, are well-known in the ancient world and have been discovered in both the Middle East and America.[7] According to witnesses, the plates contained both a sealed and an unsealed portion.[8] This unusual detail is remarkably consistent with a variety of doubled,[9] sealed, and witnessed documents from antiquity.[10]

Several individuals independently reported that the plates were bound together by three D-shaped rings.[11] This design was apparently not used for binding written materials during Joseph Smith’s day and was likely unfamiliar to Joseph or anyone in his environment. Yet it is both surprisingly practical and anciently attested. The D shape provided stability, perhaps a way to carry the heavy record,[12] and the optimum storage capacity for the plates.[13] It is notable that an Etruscan book, dating from the time when Lehi left Jerusalem, was also made from gold plates bound by D-shaped rings.[14]

As far as the weight, dimensions, and physical appearance of the Nephite record goes, a surprising number of details were reported by witnesses. Individuals who hefted the plates estimated their weight to be around 40–60 pounds. Eyewitnesses said they were about 8 inches in length, 6 or 7 inches in width, and 4 or 6 inches in depth, with the appearance of gold.[15]

Based on these descriptions, those with metallurgical expertise have suggested that the plates were made of a gold-copper alloy called tumbaga, which was well-known in ancient America.[16] Several studies have even shown that it is entirely plausible that the surface area provided by these plates was enough to have produced the English text of the Book of Mormon, assuming the engraved characters from which it was translated were fairly small.[17]

Finally, several witnesses remarked upon the beauty and seeming antiquity of the engravings on the plates, which the Book of Mormon calls “reformed Egyptian” (Mormon 9:32).[18] It is now known that before and during Lehi’s day, ancient Israelites implemented Egyptian characters in their scribal tradition.[19] There is also emerging linguistic evidence which suggests that Uto-Aztecan, an ancient American language family, may have been influenced by Egyptian.[20] Thus, from both the Old and New Worlds, there are good reasons to accept the use and adaptation of Egyptian characters, as described in the Book of Mormon.

Ancient American scholar John Sorenson has remarked, “Taken together, the descriptions we have of what was engraved on the metal plates are suggestive of what someone might say after a naïve perusal of a Mesoamerican document.”[21]

Although it may be surprising to some, ongoing research has only increased the plausibility of the numerous accounts of the plates. The reported weight, dimensions, and composition of the plates are believable. The story of their discovery is supported by a large number of similar archeological finds. And several of the record’s unusual features—such as being bound by D-shaped rings, having a sealed portion, and being written in reformed Egyptian—have a surprising amount of corroboration from the ancient world. Each reported detail, no matter how unusual or unlikely from a 19th century perspective, has checked out in light of 20th and 21st century research.

Neal Rappleye has noted that, in many cases, the eyewitnesses who provided these consistent details did so “after their estrangement from Joseph, independently and spontaneously upon questioning and cross-examination (sometimes from skeptical interviewers), during a time when [they] were scattered and isolated from each other, when no collusion was possible.”[22] Recognizing that so many independent witnesses firmly ground the plates in reality, some people have assumed that Joseph Smith or one of his associates simply forged them. Yet those who resort to this theory often fail to account for the metallurgical expertise required to create such an object.[23]

The reality of the golden plates is a key element in the story of the Restoration. If Joseph Smith never possessed them, then the foundation of Mormonism is built upon a hoax.[27] Yet if he actually did possess an ancient record, then his claims of translating it through divine power are significantly supported. It seems that for this very reason, the Lord has provided profound physical and spiritual evidences for the existence of the plates.[28] According to Elder Jeffrey R. Holland, both types of evidence are important because “truly rock-ribbed faith and uncompromised conviction comes with its most complete power when it engages our head as well as our heart.”[29]

The plates were more than just a finely-crafted artifact. They contained the most important spiritual messages from an ancient civilization, recorded and preserved by prophets over the course of a thousand years. For this reason, their contents are far more valuable than the precious metals from which they were created.[30] Yet the evidence for their tangible reality helps confirm the historical reality of the ancient prophets who created them, as well as the true doctrines and miraculous experiences which they recorded.[31]

In Elder Holland’s view, “the reality of those plates, the substance of them if you will, and the evidence that comes to us from them in the form of the Book of Mormon is at the heart, at the very center, of the hope and testimony and conviction of this work.”[32] The plates meaningfully represent the reality of Jesus Christ and the truth of His restored gospel.[33] They contain His words and to accept them is to accept Him.[34]

[3] Although we don’t know how many of the sacred Nephite relics were stored in this stone box, we know for certain that it at least held the breastplate and the Nephite interpreters. For a discussion of these artifacts, see Don Bradley, “Piercing the Veil: Temple Worship in the Lost 116 Pages,” FairMormon presentation, 2012, online at fairmormon.org.

[9] In this context, “doubled” simply means duplicated. Often a copy of a document was sealed in some manner while the other copy was accessible to anyone wanting to review its contents. The two copies were typically bound or joined together in some way. The sealed document helped authenticate the accessible one if a question of its legitimacy ever arose.

[12] Orson Pratt remarked, “Through the back of the plates were three rings, which held them together, and through which a rod might easily be passed, serving as a greater convenience for carrying them.” Henrichsen, “How Witnesses Described the ‘Gold Plates’,” 19.

[13] See Warren P. Aston, “The Rings That Bound the Gold Plates Together,” Insights 26, no 3. (2006): 3–4; Jeff Lindsay, “A ‘D’ for Plausibility of the Gold Plates: The Book of Mormon in an Interesting Bind,” online at mormanity.blogspot.com. Apparently, whoever produced the plates would have needed competent metallurgical skills to produce the rings. Those who have attempted to replicate the plates discovered that the holes in each sheet of metal would have needed to be “an elongated shape larger than the rings” themselves and also that they “cannot be too close to the edges or they tear out.” “A Model of the Plates,” made by Steven Pratt, New Era, July 2007, online at lds.org

[18] Witnesses said that the engravings were on both sides of each plate. See Henrichsen, “How Witnesses Described the ‘Gold Plates’,” 20–21.

[25] Silver was sometimes, although not always, added to gold and copper in the tumbaga alloy. See Putnam, “Were the Golden Plates made of Tumbaga?” 789. Also, Martin Harris remarked that the rings which bound the plates were made of silver. See Henrichsen, “How Witnesses Described the ‘Gold Plates’,” 19.

[27] See Tad R. Callister, “The Book of Mormon—a Book from God,” Ensign, November 2011, online at lds.org: “Joseph Smith declared that an angel of God directed him to gold plates, which contained the writings of prophets in ancient America, and that he translated those plates by divine powers. If that story is true, then the Book of Mormon is holy scripture, just as it professes to be; if not, it is a sophisticated but, nonetheless, diabolical hoax.”

[28] The Three Witnesses’ experienced a supernatural, although completely discernable and describable experience with the plates and other Nephite relics. In vision, they saw the angel who first delivered them into Joseph Smith’s possession. The angel presented the artifacts before their eyes. And they heard a voice from heaven confirming the truthfulness of the translation of the plates. In contrast, the experience of the Eight Witnesses was strictly natural. Under completely ordinary circumstances, they were each allowed to touch and heft the plates for themselves. Literary scholar Terryl Givens has explained, “Taken together, the two experiences seemed calculated to provide an evidentiary spectrum, satisfying a range of criteria for belief.” Terryl L. Givens, By the Hand of Mormon: The American Scripture that Launched a New World Religion (New York, NY: Oxford University Press, 2002), 40.

[29] See Jeffrey R. Holland, “The Greatness of the Evidence,” Chiasmus Jubilee, August 16, 2017, online at bookofmormoncentral.org. For a transcript of this talk, see “Elder Holland Speaks at Book of Mormon Chiasmus Conference,” at mormonnewsroom.org.

[32] See Holland, “The Greatness of the Evidence,” online at bookofmormoncentral.org; “Elder Holland Speaks at Book of Mormon Chiasmus Conference,” at mormonnewsroom.org.

I read somewhere that the stone box that contained the plates remained on the hill, gradually sliding down due to rain or erosion, and that one of the Whitmers went to observe it more than once. Any truth to this?