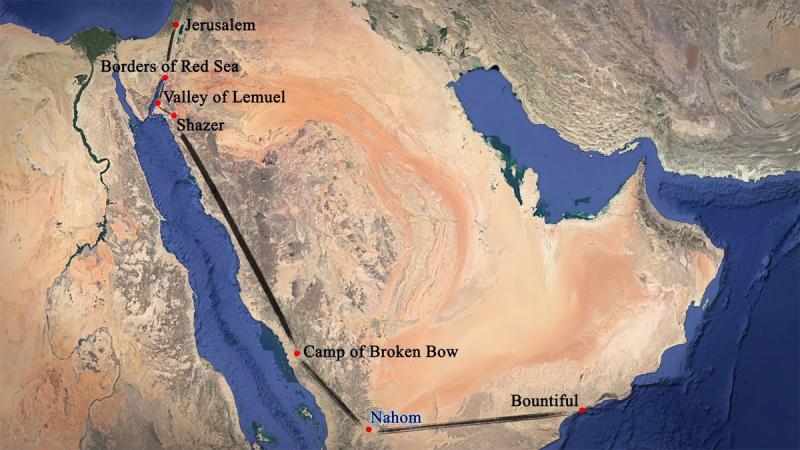 To view this article on Book of Mormon Central, CLICK HERE.

When Lehi embarked on his journey around 600 B.C., little did he know that millions of people would read and wonder about his story thousands of years later. While there is still much to learn about the people and stories in the Book of Mormon, some of the best archaeological evidence to support the Book of Mormon comes from Lehi’s journey to the promised land.

Lehi’s story begins in Jerusalem, he having dwelt there “all his days” (1 Nephi 1:4). Jerusalem is perhaps the most archaeologically scrutinized city in the entire world, as it is important to three major world religions and is the epicenter of many events in the Bible. As such, we have a good amount of archaeological information about how people lived in Jerusalem in 600 B.C. To learn all about what Lehi’s Jerusalem was like, you can read Glimpses of Lehi’s Jerusalem, available on the Book of Mormon Central Archive.

There are a few things about the way Nephi describes Jerusalem that match well with what we know about the city in 600 B.C. Nephi describes his writing as “the learning of the Jews and the language of the Egyptians” (1 Nephi 1:2). Interestingly, archaeologists have discovered pottery in Israel that contains Egyptian hieratic in combination with some conventions of the Hebrew language.

When Nephi and his brothers go back and forth to Jerusalem to get the brass plates and the family of Ishmael, they always refer to Jerusalem’s elevation in consistent ways. Whenever they go towards Jerusalem, they “go up,” and whenever they leave Jerusalem into the wilderness, they “go down.” This is consistent with how ancient Israelites perceived Jerusalem geographically, and even theologically. Jerusalem was located in the Judean hill country, elevated above the surrounding regions. Because Jerusalem was also the home of Solomon’s temple, journeys toward the city were seen as a heavenly ascent to a sacred place.

While these are only two pieces of evidence, explore the articles and books below to get a sample of all the archaeological evidence for Jerusalem that coincides with how Lehi and Nephi describe their home city.

2. The Borders of the Red Sea

3. The Location of the Valley of Lemuel

In 1 Nephi 2, Lehi and his family settle their camp in a valley with a river, whose mouth opens into the Red Sea. Lehi “called the name of the river, Laman” (1 Nephi 2:8) and called the valley after his son Lemuel. Researchers have remarkably identified a location that matches Lehi’s description of a valley that is “firm and steadfast, and immoveable” (1 Nephi 2:10), and a river that is “continually running” (1 Nephi 2:9).

Wadi Tayyib al-Ism is an impressive valley located today in northwest Saudi Arabia along the Red Sea. It is approximately a 3-days journey away from the northern-most tip of the Red Sea (1 Nephi 2:6), and it has sheer granite walls rising about 2000 ft to form a formidable valley. Most significantly, Wadi Tayyib al-Ism has a small stream (that during flood seasons and in ages past was much more like a river) of water that flows all-year long, even during the dry season—a rare find in the deserts of Arabia.

Our best clues for the location of Shazer come from its name. The etymology of Shazer has had several proposals. Some have proposed it means “to twist, to intertwine,” possibly a reference to the gnarled and twisted acacia trees that may have populated the area. High Nibley and others have suggested it derives from a common Palestinian place-name “shajer” meaning “trees, forest, woody, wooded.” Matt Bowen has most recently proposed that Shazer may come from a Semitic word meaning “gazelle,” referring to the abundant resources for hunting that Lehi’s family may have encountered.

Regardless of which etymology you follow, it appears that the name for Shazer is related to fertility for either fauna or flora. Nephi describes that the location is approximately a four-day journey south-southeast from the valley of Lemuel. As it turns out, Wadi Agharr (also known as Wadi Sharma), located in the northern Hijaz mountains, is a fertile valley with an oasis over fifteen miles long, and is the appropriate distance away from the proposed Valley of Lemuel.

5. The Camp of the Broken Bow

It appears that as the family traveled southward, the fertility of the land and the family’s opportunities for food grew scarcer. That is indeed what we find along the Frankincense trail, with cultivated land being as far as 50 miles apart from each other in this part of modern-day Arabia. Interestingly, it is in this region near the halt of Bishah that a particular type of olive tree grows that is suitable for crafting a bow. When Nephi broke his steel bow, he likely would have used the wood from the Attim or wild olive tree to craft his wooden bow (1 Nephi 16:23).

Unlike all the other places Lehi stopped, it appears he did not give this place a name. Instead, Nahom was likely already given as a name for this location by the residing population (1 Nephi 16:34). If the place was called Nahom back in Lehi’s time, you might expect to be able to find it in the archaeological record, and that’s exactly what we find in southern Arabia, along Lehi’s trail. Researchers found the name “Nehem” on a 1763 map of Arabia, and then in 1997, German archaeologists discovered an altar that dated back to Lehi’s time, with an inscription containing the name “NHM.”

The location of the Nehem tribal area in southwestern Arabia also corresponds well with Lehi’s position along his journey. Nephi recounts that after leaving Nahom they “did travel nearly eastward from that time forth” (1 Nephi 17:1) until they reached Bountiful, which is likely located along the coast of Oman.

After traveling due eastward, Lehi’s family eventually reaches the coast of the Arabian Peninsula in modern-day Oman. Researcher Warren Aston has identified Khor Kharfot, an inlet in the Dhofar region, as a potential location for Bountiful. He also identified twelve requirements that must be present in the vegetation and landscape to qualify, as described in 1 Nephi 17–18. Khor Kharfot matches well Nephi’s description of having fresh water, fruit, honey, access to the coast, mountains and cliffs, ore for tools, and timber for shipbuilding. George Potter and Richard Wellington have alternatively identified Khor Rori as an ideal fit for the location of Bountiful.

Evidence that supports the narratives in the Book of Mormon is ever increasing. While we still have much to learn about the ancient world and how it correlates with the Book of Mormon, the stories in 1 Nephi fit right at home in 7th century Israel. The locations of Lehi’s journey are beginning to be identified, and details about his experiences in the wilderness correlate well with what we know about the ancient Near East. Elder Jeffrey R. Holland has encouraged members of The Church of Jesus Christ of Latter-day Saints to embrace and seek after evidences of the gospel of Jesus Christ:

In making our case for the restored gospel of Jesus Christ, I believe God intends us to find and use the evidence He has given—reasons, if you will—which affirm the truthfulness of His work…Thus armed with so much evidence of the kind we have celebrated here tonight, we ought to be more assertive than we sometimes are in defending our testimony of truth.

As members of the Church take to heart the commission to be more assertive in defending our testimonies by studying and researching evidences, the Book of Mormon will surely get better with age.

Watch the video below for a summary of all the evidences for Lehi’s journey to the Promised Land.

For further references and notes on each of these sites, CLICK HERE.