Angels that Protect Us | Meridian Magazine 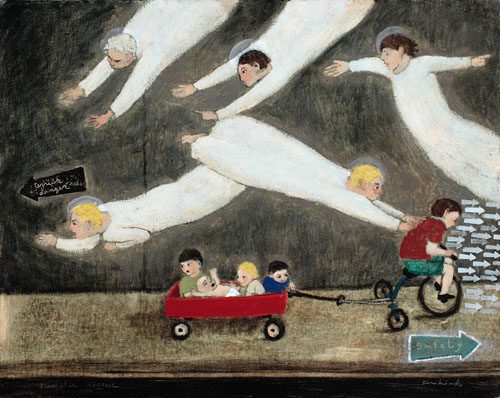 Angels that Protect Us

In our sojourn on earth we will all have times where our very lives will be in jeopardy.  It’s the nature of the human condition to occasionally be subjected to mortal danger in some sort of accident or upset.  At these junctures, God sometimes ordains intervention from angels to protect us…

Kathy (who didn’t want last names shared) told me about a recent miraculous experience involving her son, a Police Officer.  She wrote:

“My son, Jimmy is a law enforcement officer. He was on shift and in the station when dispatch said there was a robbery at the drug store that was just across the street from the police station. He with several other officers ran to the scene. A shoot out commenced, and the robber was taken down.

The next day the detectives asked each of the officers to take their place where they were when this ensued. My son recounted to me that when he did this he could see where all the bullets had struck all around where he had stood. He told me that there was no way he should be alive.  As he told me this, my deceased parents bore witness to me that they were there along with others protecting him. This has given me strength over stress, as he believes this is a calling to serve and protect, not just a job. If you were to talk with officers that had experiences like this, many would tell you that they often feel the power of angels behind them.” [1]

Elder John A. Widtsoe taught that angels are “vivid personages, intelligent beings vastly superior to man, knowing well the laws of nature and therefore able to control them.” [2]  This ability to bend the normal laws of nature, even to change the trajectory of bullets is not a problem for angels.

There appear to be assignments given on our behalf not always to stop all pain, but surely to keep us here on the earth as in the following touching story.

Janet Johnson remembers a beautiful experience she had with a young son being protected from a greater injury.  She wrote:

“My youngest child of four, a six-year-old boy, had climbed up into an open loft, twelve feet above our garage floor. He was leaning over the edge of the loft dropping army guys onto the floor below.  He leaned too far, and toppled out of the loft headfirst. His shoulder hit a shelf on his way down, and he landed on the floor screaming in fear and pain.

“When I rushed into the garage and found him, his shoulder was bloody and the skin was torn, but I was shocked that his head had not hit the garage floor. I was so amazed as I held him in my lap that I commented on that fact. Although we had never taught, or even talked about guardian angels, or the possibility of loved ones who had passed being angels in our lives, he looked at me through his tears and said, ‘It’s because I landed on the angel. He was soft.’[3]

How many children would survive childhood without angelic help?  (I’m always amazed at how any of them make it to adulthood, because of so many ways they can come into harms way). In fact, how many of us adults can survive adulthood without them?  Could it be that angels are given the job to keep us alive until our time is up on this earth?

Delores Pack remembers an experience that turned terror into astonishment and awe.  She wrote:

“While driving my car going about 40 mph, the right front tire blew out.  My arms were twisted off the steering wheel.  My car was veering right heading towards a fence at the side of the road!  I threw my arms up over my face knowing I was going to crash through the fence.

Suddenly, everything stopped moving. I opened my eyes and saw that my car was parked perfectly at the side of the road.  Someone from the other side of the veil had steered my car and parked it.  They kept me from having a terrible crash.”[4]

Delores was protected from great harm for some reason.  An angel had been dispatched just in the nick of time …

Warren Hacket also remembers a surprising event where his life was spared much pain. He wrote,

“In 1969 while serving a mission in Ciudad Guzman, Mexico, the mornings were quite cool and the floor was cold cement.  I kept my shoes under my bed so I could quickly put them on and avoid the cold floor.  My companion was already in the kitchen on the other side of the house.  As I started to put on the first shoe, I heard a voice say, “Elder, empty your shoe!”  I was still waking up but turned the shoe upside down and a small scorpion fell out.  The small ones are the most dangerous and it would have been a very painful sting and could have resulted in serious consequences.  A few minutes later, my companion came back into the room and I asked him how he knew there was a scorpion in my shoe.  He didn’t have a clue what I was talking about, and hadn’t said anything.  I know it was an angelic warning that protected me that day.”[5]

Kathleen Hoopes often feels that the veil is thin for her- She is sometimes aware of others who are nearby guarding and assisting her.  This was the case in the following sweet story,

“I met my husband Robert a few months after his first wife had passed away. We married and enjoyed an amazing and loving relationship despite a cancer diagnosis three months after our wedding.

One morning, after a particularly fitful night of sleep, when I knew his time was very short, I drifted off to sleep next to him. I had awakened several times during the night thinking he had stopped breathing, and would watch his chest rise and fall and after being assured he was still breathing, I would drift back to sleep. Eventually I must have rolled over. Suddenly, I felt someone pushing on my knees trying to wake me up. I awoke and turned around to see that Robert had tried to stand up on his side of the bed. I rushed to him just as his legs gave way. If that beloved angel had not awakened me, he would have fallen to the ground, but instead I was able to support him and quickly help him move to the reclining chair. I have felt assured that the angel who woke me up was Robert’s late wife, Kara. She was watching and waiting.” [6]  It wasn’t yet his time…

“I think about the power and force of angels that stand among us.”[7]

Angels are at times given power over the elements, as well as our human bodies, and if they are given permission, they can protect us from any harm or problem, until our work on the earth is finished.

Angels Save Little Girl from Drowning

Murl Caillouet recounts a marvelous experience where she was convinced that an angel saved her life when she was a little girl.

“Sixty years ago as a child I almost drowned. Some of my siblings and I went to swim in a river. I got caught up in the current and drifted too far from the shore.  My older sister and younger brother were able to swim close to me, but because of the strong current, were unable to get to me.  They yelled for help, praying someone was fishing and could hear them.

“Each time I was able to get to the top, they thought it might be my last.  After countless times of getting to the top, I was so tired I could hardly move.  I sank down to the bottom of the river and just sat, unable to move, waiting to die, hoping I had been a good little girl.  I can still see and feel the sand. After what seemed like a long time, I was PUSHED to the top!

“As a child I didn’t understand what was happening to me. I was wondering who was pushing me. When I was thrust up above the water, I was placed right next to a boat.  I was amazed that when I got to top, as wide as the river was, a boat was right there. A fisherman and his son heard the screams for help and pulled me out.

“Later as I grew older, I wanted to know who pushed me to the top, and the Spirit confirmed it was an angel, but I don’t know who it was. I look forward one day to meeting my angel, the one who was given the opportunity to help make it possible for me to experience the things of this life!”[8]

There is a beautiful scripture in Alma 24 that states:

“And the great God has had mercy on us…because he loveth our souls as well as he loveth our children; therefore, in his mercy he doth visit us by his angels…” [9]

God LOVES our souls! He LOVES our children!  Angelic intervention is just one way He shows it.  With unseen power angels can redirect bullets, give us soft landings, prevent accidents, or save us from drowning.  And sometimes, just sometimes, when the veil is thin, we become aware of their help.

I have 3 incidents in my life where it had to be angels that saved me!! If you do another story, I would be happy to tell you of them.

When reflecting back on our lives in the hereafter, we will witness many seen and unseen power of angels who helped us through life.